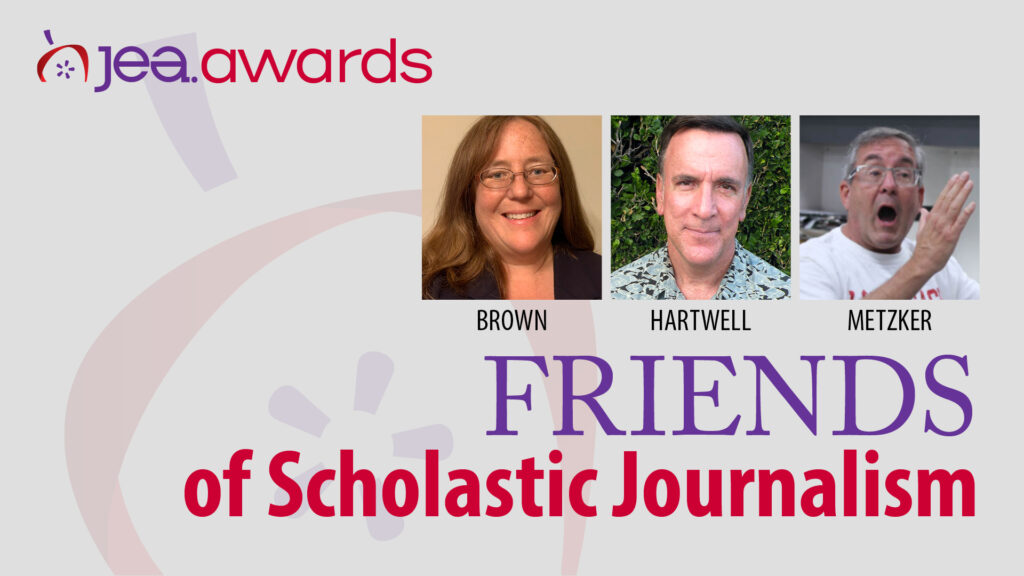 Three individuals who have made significant contributions to scholastic journalism will be honored as Friends of Scholastic Journalism this fall. They will be formally recognized during the Fall JEA/NSPA National High School Journalism Convention.

Elizabeth Brown has spent 29 years in education, serving students from diverse rural, urban and suburban schools in Florida, including 15 years as the secondary language arts supervisor for Hillsborough County Public Schools, the nation’s seventh largest school district. In 2020, she returned to the classroom as an English teacher at King High School in Tampa, Florida, but her impact on scholastic journalism is profound.

“She helped new advisers find a support system by allotting a journalism session each Professional Study Day so advisers from different schools could connect,” said Louisa Avery, MJE, adviser at The America School in London, in her recommendation. “After the state mandated common assessments for all classes, she formed a committee of experienced advisers to write the exams and create a curriculum map for the district. She also arranged for journalism programs to be recognized annually in front of the school board for their achievements.”

In addition to creating opportunities for media advisers, Brown’s dedication to scholastic journalism has influenced hundreds of students in Hillsborough County Public Schools. A proponent of sending students to local, state and national conventions, Brown’s support instilled in these student a love for journalism that caused many to pursue journalism careers in college and beyond.

“A friend of journalism is someone who is constantly supportive, pushes people to their full potential and helps teach people the need for seeking the truth,” said Courtney Nickel, journalism teacher at Steinbrenner High School. “Liz, without a doubt, has been a friend to the journalism community.”

Jay Hartwell’s career began 41 years ago as a newspaper reporter, then as the author of the Hawaii’s 1997 Book of the Year. For 20 years he served as the award-winning faculty adviser to student media programs at the University of Hawaii at Manoa, while organizing annual journalism days and competitions for high school students.

When Cindy Reves, CJE, began her work with the New Voices Hawaii movement in 2016, Hartwell was listed as the contact person. Together, they created the Hawaii Scholastic Journalism Association. Reves took the lead in pursuit of this legislation, but Hartwell made sure she was always supported.

“[Hartwell] made sure that he or someone from the university was in the room to support with testimony or just their presence,” Reves said.

Hartwell’s impact on scholastic journalism reaches far and wide, as students and advisers alike benefit from his knowledge and experience. “​​It’s clear that he spent many years as a newspaper reporter and editor who wasn’t afraid to ask the tough questions,” Jessica Hanthorn, CJE, adviser at Mid-Pacific Institute said. “But it’s also evident that he truly believes in sharing his skills and knowledge with a new generation of journalists.”

A former journalist with several Pulitzer Prizes under his belt, Gary Metzker has been a full-time lecturer at California State Long Beach, since 2008, and he uses his wealth of knowledge and experience to work with scholastic journalists and their advisers across California.

A mentor as well as a friend, advisers like Michelle Saremi appreciate how Metzker takes advisers and students under his wing, going above and beyond to help them succeed.

“He has driven up to Ventura County from Long Beach just to spend a few hours with my staff and help them with their use of white space or redesign their front page. The 405 traffic doesn’t even deter him,” Saremi said.

Metzker’s enthusiasm and passion for design are evident in all his interactions.

“Gary is more than a friend of scholastic journalism. He is a champion for it,” said Jessica Young, MJE, adviser at Orange Glen High School. “He’s a cheerleader, a coach, a die-hard fan and a participant, all rolled into one. I wish every community was as lucky as ours, to have a member like Gary Metzker.”