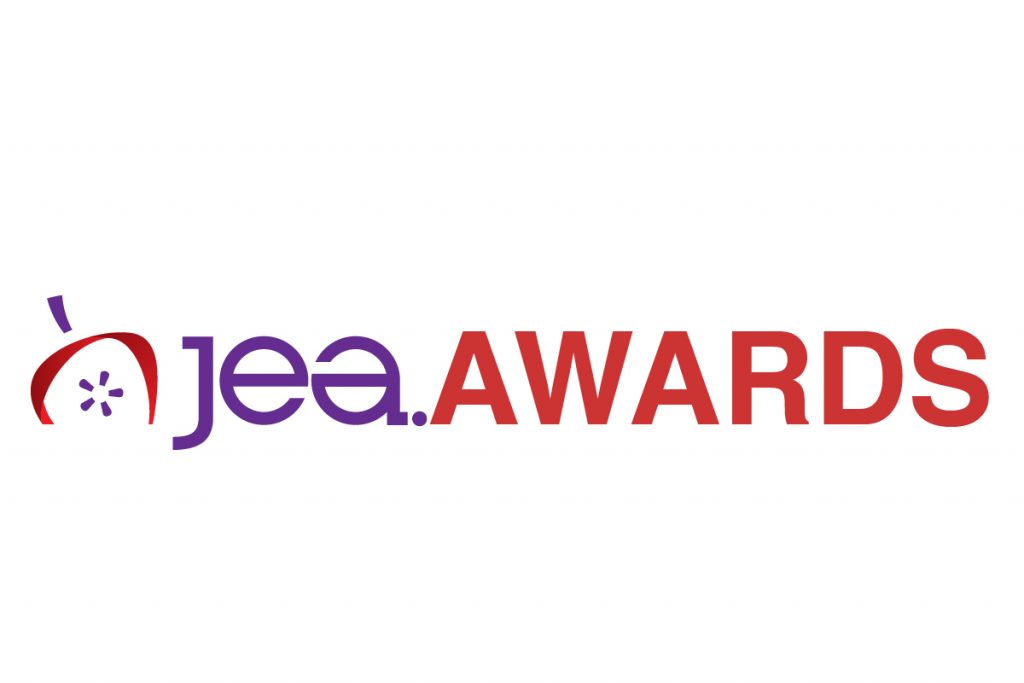 Zeb Carabello is carving a pathway for journalism in his school district in Colorado. A former journalist, Carabello found a new passion in teaching the field he loves to his students. However, as he moved into this role, he discovered the lack of opportunity for students who want to pursue journalism as a career to follow that route in high school. Instead of conceding to what currently exists, Carabello took it upon himself to write the first-ever program approval for a journalism CTE in his district, which makes sense as he advises a program that models 21st century communication and professionalism. “I find the greatest enjoyment in getting kids to believe in the power of their own voice and mind,” he said. “I love teaching them that their thoughts and opinions matter, and that somebody’s title doesn’t mean that his or her opinions and decisions should not be challenged or discussed, especially by teenagers.” This skill and belief is something that is making a difference for his students and the community at Rangeview High School, as they often find themselves with a need to find voice. “When I see my student journalists acting on their own as watchdogs for their community, I know I have done my job, especially because they live in a community that lacks enough quality watchdogs looking out for the interests of its citizens, most of whom are poor and non-white.”

Gina Claus knows just how impressive middle school journalism can be with the right passion and a little extra energy, even though the majority of the students on staff have little to no journalism or photography training. As the adviser for the Castle Rock Middle School program, she not only believes that they can do everything the older kids do, she makes sure that it happens and the students leave her classroom knowing they have had real world experiences. “All staff members are trained to be designers, writers, and photographers. The theme, font packages and spread designs are all developed by the staff,” Claus said. All of those skills and responsibilities lead up to a big day for the 7th and 8th grade students on staff when they experience the “Reveal” for the first time. “My favorite part of advising yearbook is ‘Reveal Day.’ This is a day set aside for the staff to get their first look through their printed publication,” she said. “The excitement in the air, the smiles and the moments of pride I see in my students’ faces make all the lesson planning, time spent working with my staff when we are up against a deadline and some stress tears flow from exhaustion, worth it.”

Courtney Hanks knows the importance of helping her students understand what good journalism is, which is why she always asks them, “Is this good journalism, and why?” when they are faced with making big decisions. A self-taught journalism teacher and adviser, Hanks oversees the yearbook, newspaper, and online news at University High School. Hanks began her career as a teacher in the English classroom, but her art background and her enthusiasm for learning made her the perfect person to take on these programs. “My greatest enjoyment comes from teaching journalism,” Hanks said. “I wholeheartedly believe that journalism is one of the most valuable courses on campus. The journalism classes are different as the students see their work published. I feel joy at knowing that I can provide this space for them to achieve that feeling and know their own capacity for greatness.”

Sarah Kirksey, CJE, has journalism in her blood. After working on her high school newspaper staff, she attended the University of Missouri in order to go into teaching, and with only two years of advising experience, she dove in to earn her Masters in Journalism Education. Currently, she is the vice president for the Missouri Journalism Education Association, the communications director for Journalism STL, and a member of the JEA Digital Media committee. Even with these extra endeavors, Kirksey has been able to grow the journalism programs at her school. “Over the past two years we have doubled in size and the number of students taking my introduction courses next year is unheard of,” she said. “My students are excited, fearless and self-motivated, which makes advising them an absolute joy.” Kirksey’s passion for journalism and education ended up being the perfect career match. “I became a teacher because I love teaching and I love the environment of high school, but advising has been so much more than that because I get to watch my students become teachers and leaders for their peers.”

Lori Larson left behind the world of professional journalism to enter education, but because of her connections to and knowledge of the field, she has been able to bring that world to her students. “As the adviser, I strongly promote collaboration with professional journalists on a regular basis,” Larson said. “I think any experience I can help my students gain boosts their confidence and their resumes. My students have helped report for radio stations, shadowed TV reporters, and have had their stories, opinions, and photos published in the local newspapers.” Larson’s role as a “facilitator of quality journalism” has played a major role in her students finding themselves with a wealth of opportunities despite running into complications with a principal and district who require prior review. “Unfortunately, our last step is the principal’s prior review,” she said. “When our students wanted to promote the New Voices Nebraska legislative proposal to protect students from censorship, they wrote an editorial that was published in the local paper. I’ve had students tell me that through my advice, they’ve learned to be passionate about their work, stand up for their work, but also work with those who have power over their work.”

Katie Moreno discovered her passion for journalism as an eighth grader taking yearbook. Since then, she has extended her journalism expertise, majoring in Digital Media before earning her alternative license in Texas to teach journalism. However, when she took over the yearbook program at her school in December, she found a program in need of an overhaul. Moreno transformed that program, and her actions didn’t go unnoticed by the school. “The next year, my first full year teaching, I was also given responsibility of Newspaper and Journalism 1,” Moreno said. “Teaching four preps without a PLC as a first-year teacher was by no means an easy task, but it absolutely shaped me into the teacher I am today.” Now, Moreno is nearing her fifth year as an adviser and the program has been revitalized. “I have combined my staff to include both Yearbook and Newspaper,” she said. “It eliminates petty competition, doubles the resources and has allowed them all to invest in both publications.”

Nancy “Joanie” Oben is a jack of all trades when it comes to journalism. Being a print journalism major in college helped her comfort level in advising yearbook, newspaper, and online news, but broadcast was completely new to her when she started teaching at Robinson High School. Despite her minimal knowledge with video production software, Oben was able to help build strong programs in each area due to her unwavering support for student voice and dedication to the programs. “My students are completely in charge of all content decisions for all publications,” she said. “I offer advice but it is ultimately their decisions. I don’t agree with everything they want to write but I let them move forward with what they want.” The way in which she advises each program has made the difference in advancing the students to gain 21st century skills. “She brought the newspaper and web site staffs together so that they could learn broader journalism skills, both breaking news coverage online and more in-depth coverage as well as news design in the newspaper,” JEA Mentor Vicki McCash Brennan said. This has been a tremendous improvement, not only for the quality of the students’ journalism education, but also for the publications themselves.

Jayna Rumble, a former JEA Future Journalism Teacher Scholarship recipient, had been advising the yearbook program at Troy High School for two years before she was approached to take on the newspaper program as well. Rumble now knows the challenges of taking over a program that’s been in shambles; however, she also knows the joys that can come from advising a team of students who want to turn it around completely transform how their work is viewed. “The paper had suffered from a series of adviser and class structure changes. I was eager to turn this around, but I knew it would take time,” she said. “My first editorial staff wanted to overhaul the program and rebrand everything. Since then, I’ve had the pleasure to watch the school community come to respect and admire the work that the students do in the program.” Rumble’s leadership and empowerment as an adviser has pushed her students in the right direction. “A good teacher answers questions, but a truly exceptional one gets students to ask them in the first place,” former student and Michigan Student Journalist of the Year Leah Graham said. “Mrs. Rumble is that teacher. Her dedication demands an equivalent response.”

Hannah Shapiro “found herself facing a defunct newspaper program and a broadcast program reduced to students producing random music videos that weren’t even very good,” JEA Mentor Sheila Jones said. “The challenge emboldened her. Enrollment was in the single digits. With strong determination and a charismatic personality, Hannah quickly began rebuilding the journalism program based on standards and quality content.” Now, Shapiro finds enjoyment seeing the students discover their First Amendment Rights when they take the Introduction to Journalism class at Eagle Valley High School. “I love seeing how excited they are when they realize that all this time they have cared about their rights without knowing that’s what it was, and I get to see their awakening of civic awareness and engagement,” she said. Instilling this passion and understanding of the First Amendment has paid off. The students feel empowered in the print, online and broadcast programs to make content decisions, and whenever they begin working on a controversial story with ethical or legal concerns, the students engage in discussions with editors or seek advice when they feel they need it.

Lisa Stine, CJE, believes whole-heartedly in student ownership of their work when they are a part of the yearbook and newspaper programs at Bryant High School, so much so that she wrote an article titled “Engaging Students with Ownership” for Jostens “Yearbook Love” website. After having that same feeling and experience as a yearbook editor when she was in high school, she knew the power that ownership could have on her own students and works to create that atmosphere. “I want my students to know the value of dedication and hard work, so I expect a lot from them,” she said. “When students join, I tell them that student journalism is not just a club or a hobby—this will require hours of service and commitment to their school and the students here.” Stine holds this same expectation for herself as an adviser, as she has immersed herself in the scholastic journalism world. She is on the executive board for the Arkansas Scholastic Press Association, is a member of JEA and NSPA, attends state and national conventions, and presents at workshops and conventions across the country.