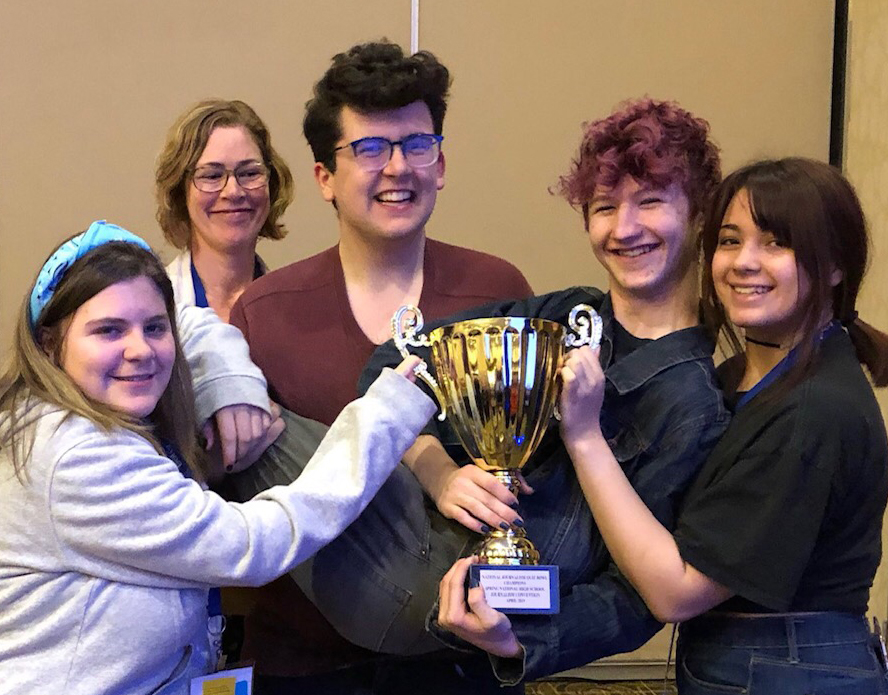 On April 27 in the Hilton Anaheim Pacific Ballroom A, juniors Samantha Howard, Evan Reynolds and Luke Gladen-Kolarsky plus senior Darina Miroedova from Lincoln High School in Portland, Oregon, celebrate their win with their adviser, Mary Rechner, cheering them on from behind. Photo by Allie Staub, CJE

Students on the winning team represented the variety of publications in the Lincoln journalism program, and each brought their expertise to the competition. Gladen-Kolarsky is a reporter for The Cardinal Times newspaper. Reynolds is news and features editor on the Times staff and will be next year’s editor-in-chief. Miroedova is editor-in-chief for the Cardinal yearbook. Howard is the director of photography for the Beyond the Flock magazine.

This was also the first convention where the new quiz bowl format was rolled out. To determine the initial seeding of the 30 registered teams, 26 teams of four students took a pre-qualifying  test on April 26. In the new quiz bowl format, the test was taken in person online through the learning management system Canvas. The next day, the top 16 qualifying teams met for four rapid-fire buzzer rounds, answering questions pertaining to current events, media law and terminology, and civics. For the new format, instead of the first team to 10 correct answers winning each round, it was the team that scored the highest out of 10 questions that won each round. This allowed for the difficulty level to increase as teams progressed through each round.

The Lincoln team was surprised by its success. Reynolds was on Lincoln’s constitutional team, but hadn’t done much else to prepare.

“Being on the constitutional team taught me a lot of civics, but we didn’t really prepare, or even know that there was a quiz bowl until two days ago,” Reynolds said.

He also chalked up his interest in current events in helping him answer questions correctly, but he was glad to have his fellow teammates there to fill in the gaps. “I read the newspaper a lot and helped with that and civics. But I’m not the best at terminology so to have my teammates know that stuff was very helpful.”

The team from Eagle Valley High School was the runner-up. Initially seeded sixth and Lincoln seeded eighth, both teams performed well in the early rounds of the competition defeating their competitors in the first rounds by scores of 6-2 and 6-3 respectively out of the 10 question-round. In the final round, the competition level increased with 20 of the increased-difficulty questions. Lincoln ultimately prevailed in the intense round with a score of 4-1.

Eagle Valley prepared about the same amount as their competitors, “We did not study much,” said junior Riley Dudley, a reporter for The Devil’s Advocate newspaper. “We just thought this would be a fun thing to do.” It was also Eagle Valley’s first time competing in the National Journalism Quiz Bowl.

Mary Rechner, who advises Lincoln’s magazine and the yearbook, attributes the team’s success to teamwork and brain power, “What’s cool about this team is that we have two reps from our newspaper, one from the magazine and one from our yearbook, so it’s a mixed team,” she said.  “I’m really proud of them. They’re obviously very smart, and they work well as a team.”

Even though it was their first quiz bowl experience, both teams enjoyed the new quiz bowl format.

“I really liked this new format, because it kept it to more concise time and made it more competitive,” said Eagle Valley junior Sally McDonald, editor-in-chief of The Devil’s Advocate. “The final round questions were really hard; they were definitely a challenge compared to the earlier rounds.”

The championship team agreed. “We won, so I say it was great,” Reynolds said. “The increasing difficulty level was fun. It was fun to see how our answers just deteriorated very rapidly; it was quite fun.”

The National Journalism Quiz Bowl is held twice a year at the JEA/NSPA National High School Journalism Convention. The next quiz bowl will be in November at the fall convention in Washington, D.C.