JEA announces its 2018 National High School Journalist of the Year

JEA announces its 2018 National High School Journalist of the Year 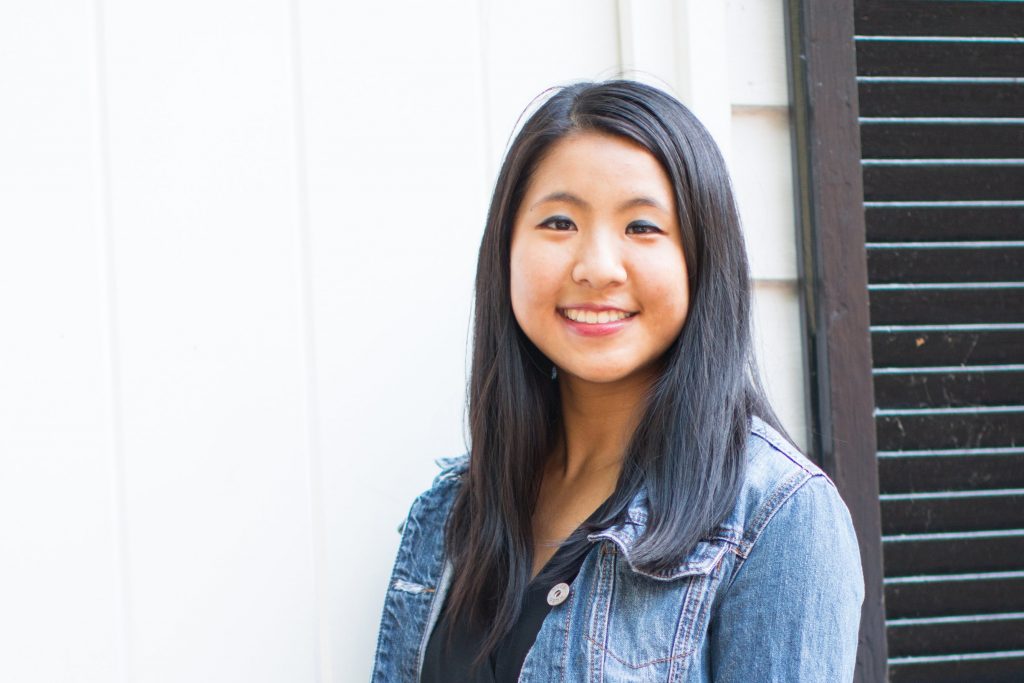 During the past school year, hundreds of high school journalists throughout the country worked hours to complete their portfolios for state Journalist of the Year contests, and the 36 state winners who entered the national competition were recognized April 12 at the opening ceremony of the JEA/NSPA Spring National High School Journalism Convention in San Francisco. The winner and six runners-up were recognized April 14 at the closing awards ceremony.

When the final results were announced, Christine Zhao of Thomas Jefferson High School for Science and Technology in Alexandria, Virginia, was named the 2018 National High School Journalist of the Year. Zhao will receive a $3,000 Sister Rita Jeanne Abicht Scholarship as part of her recognition from the Journalism Education Association.

Six other state winners were named national runners-up. Each will receive an $850 Sister Rita Jeanne Scholarship. They are as follows:

Named in honor of JEA’s longtime treasurer, the late Sister Rita Jeanne Abicht, FSPA, the scholarships recognize some of the top high school journalists in the country. Portfolios are judged in the month leading up to the JEA/NSPA spring national convention, and scholarships are given in honor of their work on scholastic media.

The national applications this year were submitted digitally. The competition attracted dozens of entries in some states and none in others. The 37 members of the scholarship committee were impressed with the depth of experience contained in the state-winning entries. 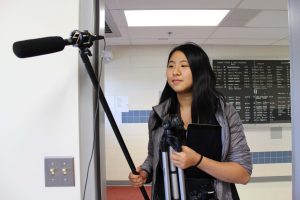 CHRISTINE ZHAO, Virginia, 2018 National High School Journalist of the Year – Carrying a tjTV gear to record sound clips and B-roll, senior Christine Zhao walks into the security room to interview security employee Charles Phillips. He is one of many people Zhao is highlighting for an online series on the stories of African-American students and staff. During most lunches, peers will find her carrying her iPad, as she does in this picture, racing to her next conversation with the girl eating lunch in the hallway or the principal in her conference room.

Christine Zhao has been a member of her high school journalism program for three years, most recently as editor-in-chief of investigations for “tjTODAY,” her school’s online and print newspaper.

Zhao’s former principal, Evan Glaser, noted in a letter of recommendation how amazing it is that Zhao brought such a level of humanities into her work in an environment where humanities isn’t the main focus.

“Christine Zhao managed to juggle intensive investigative reporting on controversial issues affecting her state-chartered magnet school for science and technology,” said Michelle Harmon, MJE and JEA’s Idaho state director of Boise, Idaho. “From a judge’s perspective, Zhao broached the classic struggle between administration and a free press with a sensitivity and doggedness much needed in today’s society. She’s an example for us all.”

Her adviser, Erinn Harris, CJE, described her not as fierce, but as FIERCE, to characterize her passion for the pursuit of truth.

“FIERCE describes the gravity with which she takes her job as a voice for the Jefferson community,” Harris said. “It describes her desire to innovate, to investigate and to inspire. Simply put, Christine is a journalism teacher’s dream.”

Zhao persevered after writing a piece about a controversial summer science program that usually produces winners of a prestigious national science competition. Instead of being discouraged from cautious administration, angry faculty members and online trolls, it drove her to seek more truth. She sought other stories like an investigation of sexual harassment and assault accusations of fellow students.

“I will continue to be a voice for my community, even when it doesn’t realize it needs a voice; I will continue to break ground with my attentive reporting to expose what often lies beneath the facade,” Zhao writes in her essay. “I listen and I pursue; I persevere and I do not relent. These traits single me out from the rest, which can intimidate and inspire jealousy and attention. However, I am no longer afraid to stick out.” 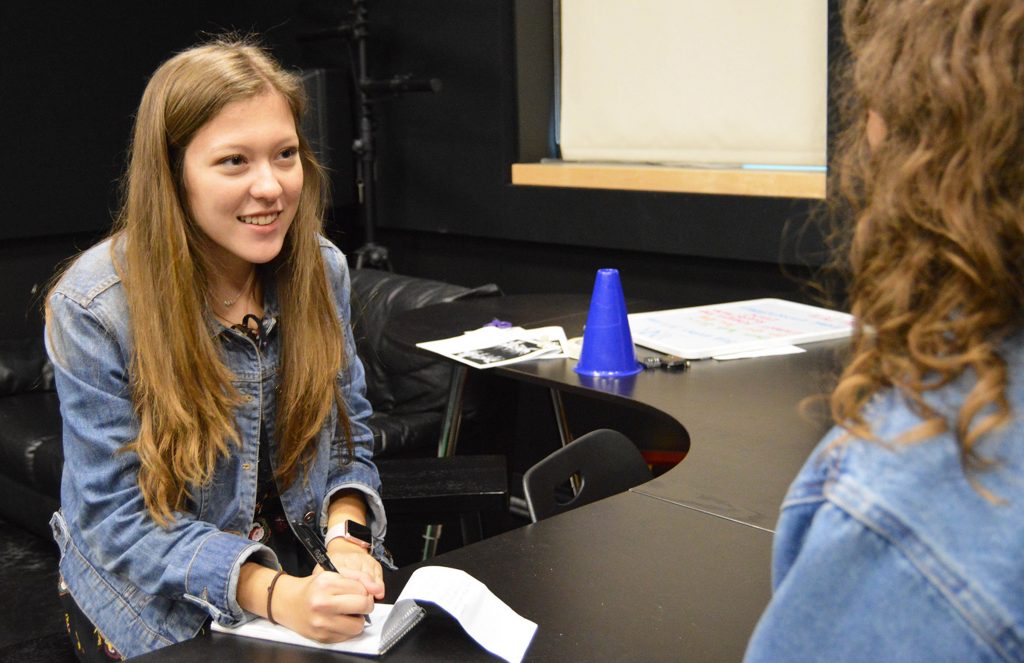 Haley Keizur of Washington knows her voice, her staff and how to use both to maximize success and potential.

“It is evident that journalism is in her blood,” said judge Patrick Johnson, MJE and adviser at Antioch (Illinois) Community High School. “From her time on staff to her evident drive to make press rights accessible to students in Washington, Haley is certainly a force to be reckoned with.”

Keizur’s portfolio was full of writing experience as her first passion, but showed her diversity in all aspects of journalism.

“It’s clear that Haley has a complex understanding of the creation and process of creating student media,” said judge Jessica Hunziker, MJE, and adviser at Castle View High School, Castle Rock, Colorado. “In terms of news literacy, Haley has an artful approach to determining what is news and how to convey those stories to her readers. Haley’s role in advocating for free expression as well as the variety of stories she tells demonstrates her commitment to journalism and student media.” 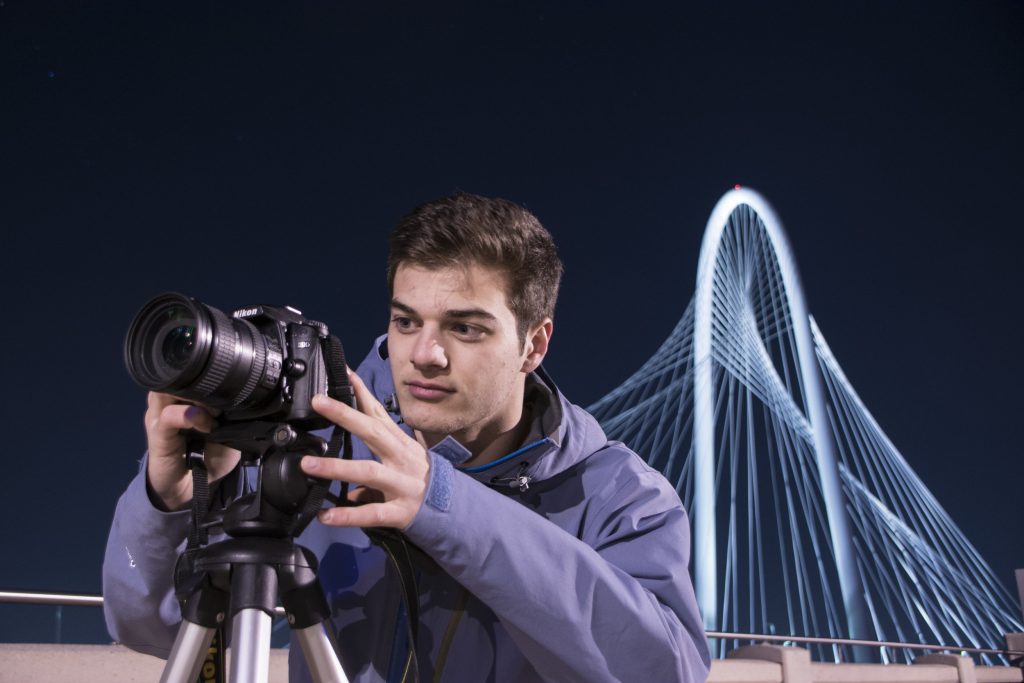 Kobe Roseman of Texas takes initiative on his own reporting by going outside the walls of his school, looking for professional/expert sources to do research necessary to tell compelling and deep stories. He puts himself in situations where he gets to report about real people and real situations.

“Kobe is a well-rounded journalist with many talents,” said judge Megan Palmer, CJE and adviser at Park Hill South High School, Riverside, Missouri. “He is a true leader on his staff and strives for continuous improvement in himself and his staff. He takes on big issues in responsible ways and is always looking for new ideas. He has obviously earned the admiration of his adviser, headmaster and others through his leadership and involvement. I’m in awe.” 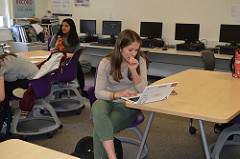 Natalie White of Illinois has won over her administration while she fought for her First Amendment rights. She challenged herself in all aspects of her media program and set an example for future Omega newspaper staff leaders to follow.

“It is clear that Natalie grew each year and challenged herself to be in charge of more aspects of student media and lead by example,” said judge Adam Dawkins, CJE, and adviser at Regis Jesuit High School, Aurora, Colorado. “So many times we see plenty of examples of what the student journalist did on his or her own and their own work across categories, but rarely do we see such wonderful examples and reflection on true newsroom leadership. Natalie gets it. She has clearly created a culture of professionalism, accountability and a family-like atmosphere where staff members are comfortable taking risks and knowing they will be supported.” 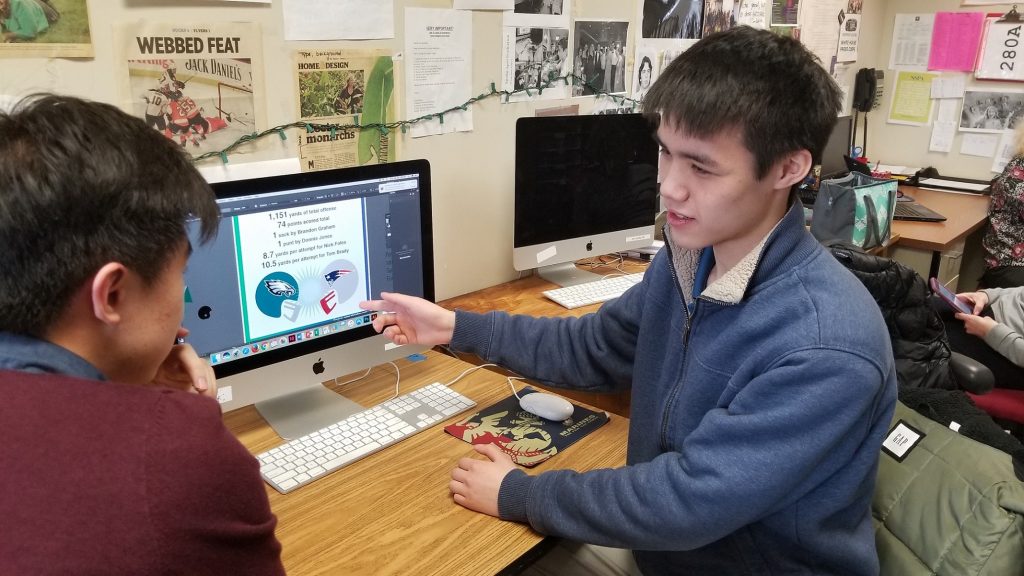 IAN ONG, Pennsylvania
Managing Editor Ian Ong explains the design choices behind a graphic to Co-editor-in-chief Eric Xue. The graphic would be published in the February 2018 issue of Conestoga High School’s newspaper, The Spoke.

Ian Ong of Pennsylvania had judges wishing he was on their staff. He inspired one of them with his editing exercise that she plans to use on her own staff applicants in the near future.

“Ian is a rock star in all possible ways,” said judge Rebekah Goode, CJE and adviser at Woodward Academy, College Park, Georgia. “His ability to translate complicated information into digestible graphics is impressive and no doubt created understanding for his readers. The law and ethics portion of Ian’s website clearly points out his careful editorial decisions based on professional guidelines.” 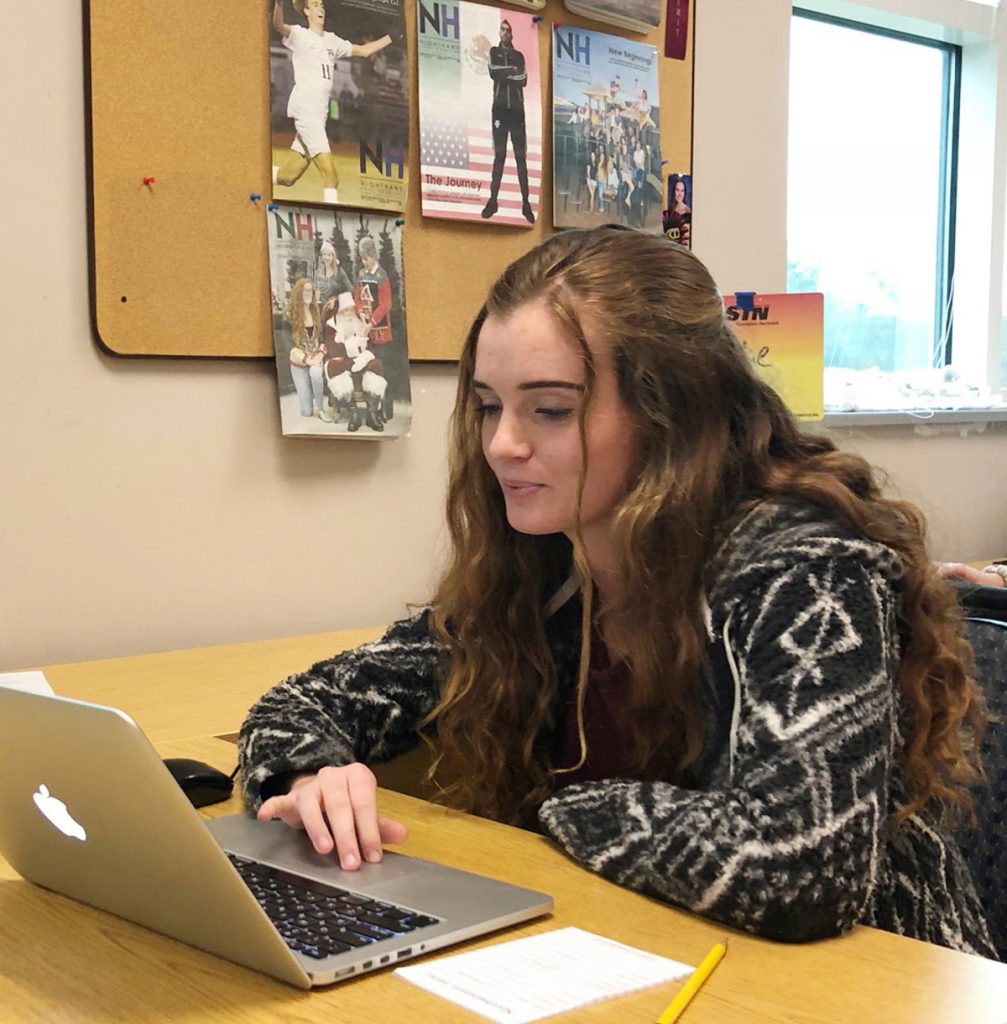 ARABELLA SAUNDERS, North Carolina
Senior Arabella Saunders works on an infographic for Nighthawk News’ Mental Health Edition with other issues of the paper displayed behind her in the newspaper room at First Flight High School.

her passion for journalism leaped off the page. She is not afraid to cover controversial and timely stories in her effort to give voice to the voiceless.

One judge commented about a story Saunders did on DACA and how the program’s departure could impact students in her community.

“Her tenacity clearly shows in the work she completed to write an objective article about the DACA recipients,” said judge Gabrielle Herbst, CJE and adviser at Beverly Hills (California) High School. “To be able to identify her own bias, and work harder because of it, allows her to do what many modern-day journalists lack; the ability to report objectively. Her tenacity in approaching both her principal and superintendent, and the Student Press Law Center, regarding various censorship issues shows what an incredibly strong and empowered young women Arabella is.” 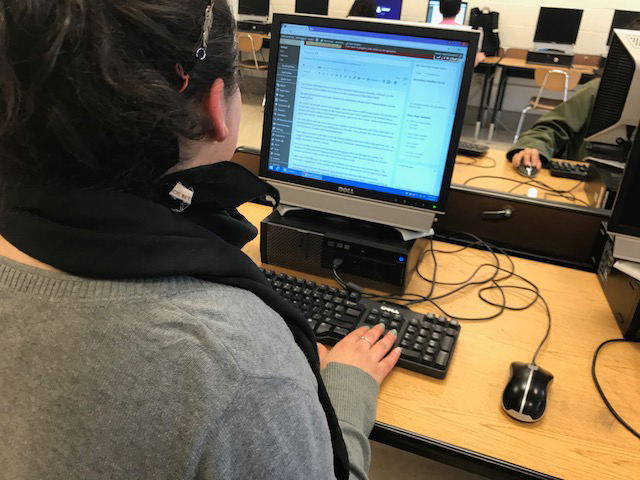 Sarah Elbeshbishi of Maryland uses data journalism to adjust her goals, and it comes naturally to her. She also is a natural at leading her school’s newspaper staff.

“This journalist of the year has a drive and passion to be successful, which is beyond admirable and an exemplar of the heart she has for storytelling and her community,” Johnson said. “From coaching writers to helping to make a change for those who needed a voice, she pushed to be successful in everything she felt the school’s newspaper needed to thrive. What I found most refreshing was her ability to engage others in her process of reporting and how she was thoughtfully able to reason through what she has done and continues to do as a journalist.”

The full list of state winners entered in the national competition is as follows: