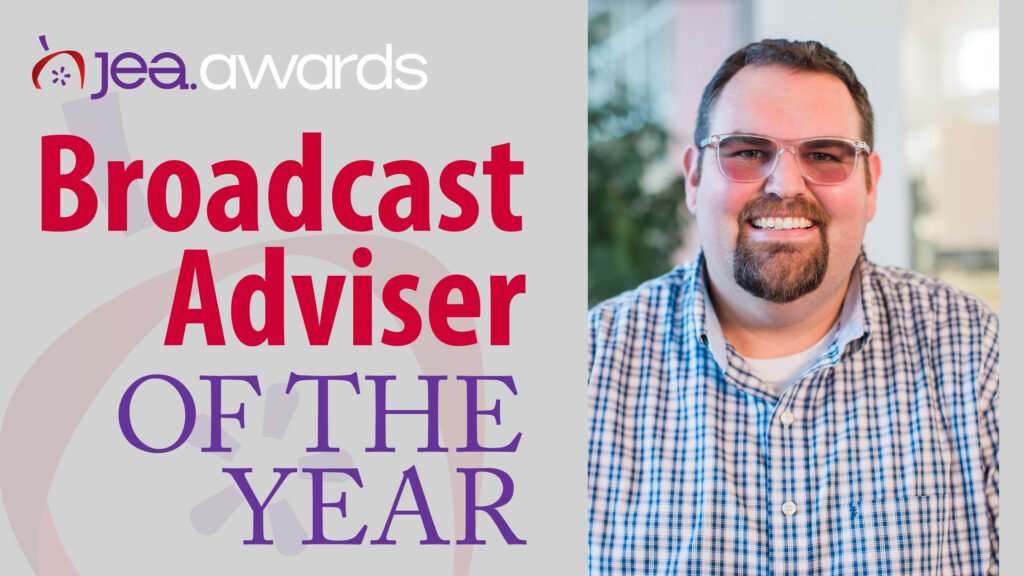 Involved in scholastic broadcast journalism since 2007, Chambers is an exemplary teacher-mentor, guiding students and fellow advisers to fulfill their potential, creating an inclusive classroom environment for diverse students with diverse talents and interests.

Chambers receives a $1,000 prize, and his school receives $500, which may be used to buy equipment for the broadcast classroom or to fund student scholarships for summer media workshops.

Advisers across the nation embrace the concept of a student-centered classroom, but few truly embody the ideas as much as thoroughly as Andrew (A.J.) Chambers, MJE.

“I care a thousand times more about my students as a person than I do the product they are going to produce,” Chambers said.

This dedication to his students goes beyond their work, beyond the product.

“Any student can sign up for the program. Literally any student. This is important to us as a program. I do not do interviews or look at grades,” Chambers said. “I feel if a student is interested enough to apply, then he or she should get a chance.”

These chances take a wide variety of forms. From helping students cultivate their voices, to encouraging them to share stories that matter to the Richland Northeast audience, to partnering with local journalists to mentor and model professionalism, Chambers provides the support his students needs to create content that rivals any in scholastic and professional media alike.

“AJ has a saying that I myself use in my own classroom: ‘What are you doing for your story that sets it apart?’ This question alone shows that he is always thinking of his students, creating the highest possible level of broadcast journalism they can do,” Richland Northeast Convergent Media adviser Michael Branham said. “Furthermore, he encourages them to take on topics most would feel uncomfortable tackling. He wants them to tell stories and not just look good in front of a camera. And by doing this, his students are able to give a voice to the voiceless.”

In addition to supporting his students in their journalistic endeavors, Chambers currently serves as the only JEA-certified mentor in South Carolina and considers this to be his most significant contribution to scholastic journalism.

“I have been able to help advisers who feel like they are drowning by throwing them a life preserver to assist in breaking down the basics of broadcast journalism and being an encouraging listening ear,” Chambers said. “It makes their lonely island not so lonely. It is in this role that I spread my legacy beyond the students in my classroom.”

While Chambers may consider his mentorships to be his most significant contribution, his students and parents alike would argue that his legacy will be his dedication to his students.

While on a tour of Richland Northeast, her alma mater, Kelly Etu Stanton, M.Ed., found that her son, an incoming freshman, had wandered into Chambers’ classroom.

“We walked around with one of the administrators and in the amazingly beautiful Convergence Media lab is where Jackson disappeared. I ran back and asked a very kind man (Mr. Chambers) if it would be okay for him to hang out, and he said it would be just fine. Jackson never joined the tour again. That was the day Jackson found his home, his family and his future,” Stanton said. “I know that my son is not the only one who has benefitted from [Chambers’s] kindness, his respect for students and understanding of their growth and development emotionally and socially at this age, and the time that he puts into this program.”

Many advisers find themselves starting out as English teachers who fall into the world of scholastic publications for one reason or another. When Patrick Moring, CJE, first began his career, he mostly taught English classes, with two small electronic media classes mixed into his schedule. Today, he teaches three large electronic media classes, one live sports broadcasting class, a special effects and motion graphics course that focuses on Adobe After Effects, and two IB film classes. To say the program has grown? That’s an understatement.

“One of the greatest things about Mr. Moring as a teacher is his drive and excitement for his students to succeed,” 2021 Rampart graduate Katelyn Zaiger said. “His goal for KRAM is that it is a student-run program. While he helps students learn camera settings, how to interview and edit, Mr. Moring lets us experiment in his classes. He is always there to guide us in the right direction but has trust in us to make something amazing. No matter the level of experience of his students, he encourages each one of us to continue to play with our own creativity.”

The growth of Rampart’s broadcast program is impressive in itself, but what is even more impressive is Moring’s dedication to uniting the school community through stories that matter.

“When I hear the statement, ‘I never would have known …,’ I know that my students are making a difference,” Moring said. “It’s why I advise. It’s why I teach. It’s why I get to work every morning and know that I love what I do.”

“It is a more important task than ever that our students learn how to effectively engage with all forms of media and become media literate citizens of the 21st century,” Kevin Patterson, CJE, said. “I believe that by producing content in broadcast courses they can develop a significantly better understanding of the content they consume.”

Now in his 11th year as a television production teacher for Seminole County Public Schools, Patterson places heavy emphasis in his broadcast classes on media literacy and the journalist’s job to report the truth.

“His students learn about integrity and truth and the important role that journalism continues to play in a democratic society, regardless of the delivery method,” Oviedo High School yearbook adviser Merrie Alicia Pope said. “He builds his staff’s interest in current events and many graduates continue the pursuit of truth when they enter a collegiate broadcast program.”

While his diverse group of staff members may not choose a media-related career path, Patterson understands that these students will “spend their lives being consumers of media and must better understand how it’s created in order to be informed consumers.”

“In creating media content, students are improving their media literacy and building on their repertoire of soft skill sets,” Patterson said. “I believe those two aspects of my course to be the most valuable way I can enable my students to be college and career ready in the 21st century, whatever their intended field of work may be.

‘“Always be recruiting’” is one of my mottos,” Lindsay Benedict, CJE, said. “The broadcast staff’s diversity consistently reflects the diversity of our school, and students who aren’t in journalism are able to see that — which I think helps draw them in.”

This welcoming environment is one of the things that has made Benedict’s program at McLean High School the success it is today.

“Ms. Benedict values inclusivity and welcomes all students into her classroom,” McLean Principal Ellen Reilly said. “Last school year, one of our students who has Down syndrome joined the broadcast journalism class. While his personality is larger than life, his speech was difficult to understand. This did not stop Ms. Benedict from making him anchor for our news show. He worked on his speech and the students provided him support and encouragement. He left that classroom knowing that he could become anything he wanted to become once he left our school.”

This level of support and inclusivity takes high school students and turns them into something more.

“The logistics that Lindsay has to deal with in supporting both print and broadcast classes, with the number of students she has, is intimidating to most teachers,” Fairfax County Public Schools multimedia engineer Marcos Salinos said. “But Lindsay makes it work, in large part because she empowers the students to function independently (alone or in groups), in preparation for the daily broadcasts. The result is always a treat for me to witness. The tech setup, rehearsals and show are the work of a small army of young, promising professionals.”

Traveling between two high schools each day, Justin Ford produces a live morning shot at Park Hill South High School and then a live afternoon show at Park Hill High School. No matter the program, the energy created in the process is Ford’s greatest enjoyment in high school broadcast journalism.

“When it’s time for the show to start, students must step up in that moment as a team, from the producers to the camera operators to the anchors.” Ford said. “When the live show is over, I see the energy created through the process of coming together as a team carry over to the students as they go through the rest of their school day. I see it carry over to the next show the next day. I see it carry over when they apply for that college they want to get into or when they pursue that next story idea.”

The energy is contagious and has the ability to inspire students to immerse themselves in the world.

“Walking into my first class,” 2020 Park Hill graduate Salome Yimer said, “I wondered why a 40-year-old man got so excited talking about unfamiliar words like ‘hook,’ ‘package’ and ‘Walter Cronkite.’ I was soon introduced to a world of creativity. I’ve learned many important life skills from Ford that I know will allow me to push further than my peers in the future.”

Under the leadership of Chris Waugaman, MJE, the broadcast program at Prince George High School embraced the idea that success comes with innovation, change and diversity. But many believe, like R.J. Morgan, MJE, the secret to success was actually Waugaman himself.

“Chris keeps his program on the cutting edge by constantly consuming best media practices himself, then challenging his students to integrate those practices into their own media outlets (and then teaching them how to do so),” said Morgan, Mississippi Scholastic Press Association executive director. “Rather than doing things the way they’ve always done them — which would be tempting for any staff as successful as those at Prince George High School — Chris’s programs are constantly innovating, constantly changing.”

Whatever Waugaman learns from his endeavors, he shares with his colleagues all around the country. After seeing Waugaman’s 2019 JEA Advisers Institute presentation on election coverage, 2020 Broadcast Adviser of the Year Jim McCarthy was inspired to secure press credentials for his students to cover a Pete Buttigieg presidential campaign stop.

“I thought of Chris more than once that night, and what I remembered from him was his message that my student had just as much right to cover this event as any other reporter in the room,” McCarthy said. “He, of course, was right.”

“My creative outlet started with iMovie,” Grant said. “For the past three years, I have worked on television commercials, Broadway Disney shows and more.  What started as a class assignment became a genuine passion and curiosity for video production on a larger level — path that would not have been forged without Mr. Waugaman’s broadcast class and encouragement.”