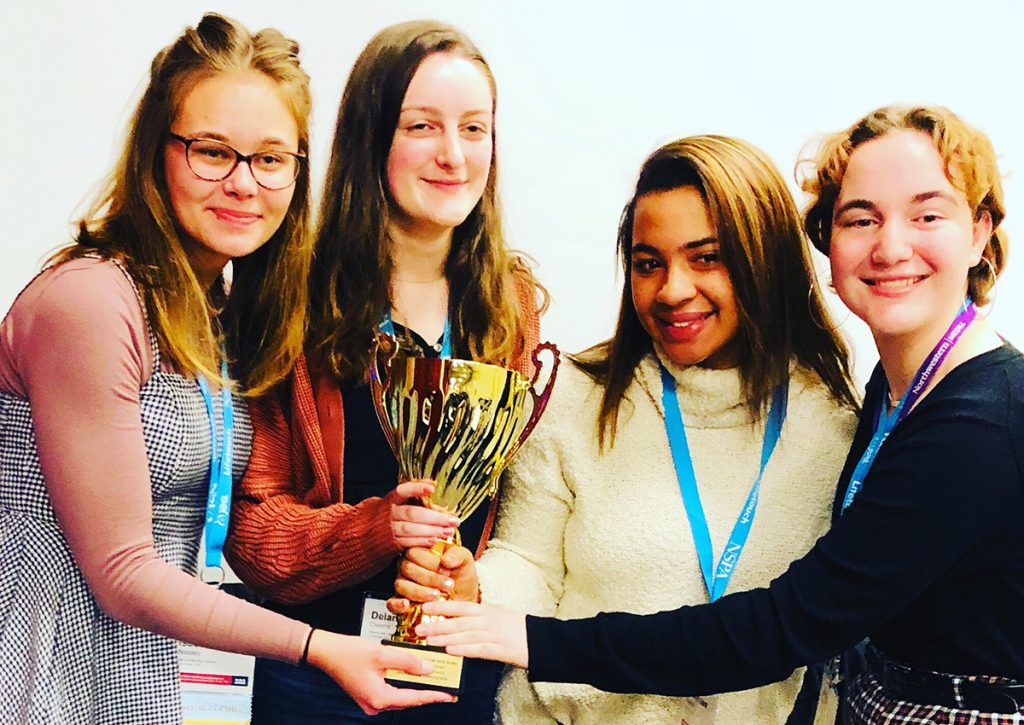 Students on the winning team represented The Chatterbox newspaper staff and The Remembrancer yearbook staff. Each brought their own expertise to the competition. Jay is the managing editor of news and features for the Chatterbox and the fine arts designer for the yearbook. Nissley is the online editor-in-chief for the newspaper. Rasheed is a sports writer for both publications, and Owens is the managing editor for visual elements. The team is advised by Samantha Gerwe-Perkins, CJE. This was Walnut Hills’ second time competing in the National Journalism Quiz Bowl and it’s second win.

To determine the initial seeding of the 44 registered teams, 43 teams of four students took an online qualifying test on Nov. 22. The next day, the top 16 qualifying teams met for four rapid-fire buzzer rounds, answering questions pertaining to current events, journalism law and terminology, and civics. The team that scored the highest of 10 questions proceeded to the next round, and for the final round, the winner had to score the highest out of 20 questions.

Hot off of last year’s success, the teams and their adviser were looking to succeed again.

“We entered last year kind of on a whim,” Gerwe-Perkins said. “So this year we were like, how would we do if we actually prepared? ”

“Our adviser has been sending us quizlets for months,” Jay said. “But we didn’t really start practicing until two weeks ago.”

Walnut Hills also boasts one of the most successful Academic Quiz Bowl teams, which the journalism teams used to their advantage.

“We borrowed the Academic Quiz Team’s buzzers and practiced at these little tables during lunch,” Nissley said.

It also helped both teams that the Walnut Hills journalism program already focuses on some of the bigger portions of quiz bowl knowledge.

“Our program is really good for this because we learn a lot about current events every week, so we’ve really been preparing for this for a while,” Owens said.

“We also got lots of advice from the seniors from last year that won the quiz bowl,” Owens said.

Even though the team prepared, the live rounds were nerve-wracking.

“It was stressful because I don’t count the questions so I never knew how many were left,” Nissley said. “In the second round, we had like zero points and they had two and we had to come back and then it was tied.”

”We happened to be trailing them the whole time and just lucked out getting something we knew,” Owens said.

Gerwe-Perkins, who advises both The Chatterbox and The Remembrancer, attributes the students’ success to their strong work ethic and good teamwork.

“I’m really proud of them; they worked really hard,” Gerwe-Perkins said. “They had a really good balance of knowing when somebody else on their team knew the answer. After the first time they practiced together, we found they had an aggressive buzzer —Mackenzie — who would be like ‘one of these kids know this.’ But they all studied and they all worked hard. All the teams did. They had study parties.”

After studying and preparing together for so long, the teams found the final round showdown to be more tame than their practice runs.

“This is how we practiced in class, on teams,” opposing team member and editor-in-chief of the Chatterbox, senior Caroline Horvath said. “So this round it actually got a lot nicer, and we were laughing instead of smack-talking each other.”

“It was stressful but it was really fun,” said Alonna Johnson, managing editor of student life on The Chatterbox. “It was really more fun than anything. I was stressed because I knew if they won they’d talk a lot about it the rest of the year. We’d have to bring our A game.”

Even though they’ve won two fall conventions in a row, the significance of this win is not lost on Gerwe-Perkins and her staff.

“It was great because I’m like definitely a sports person, so to come from not always being academic, it feels great knowing I won a quiz bowl,” Rasheed said.

“It feels good especially knowing that the team last year won,” Owens said. “We can’t wait to go home and tell them about this.”