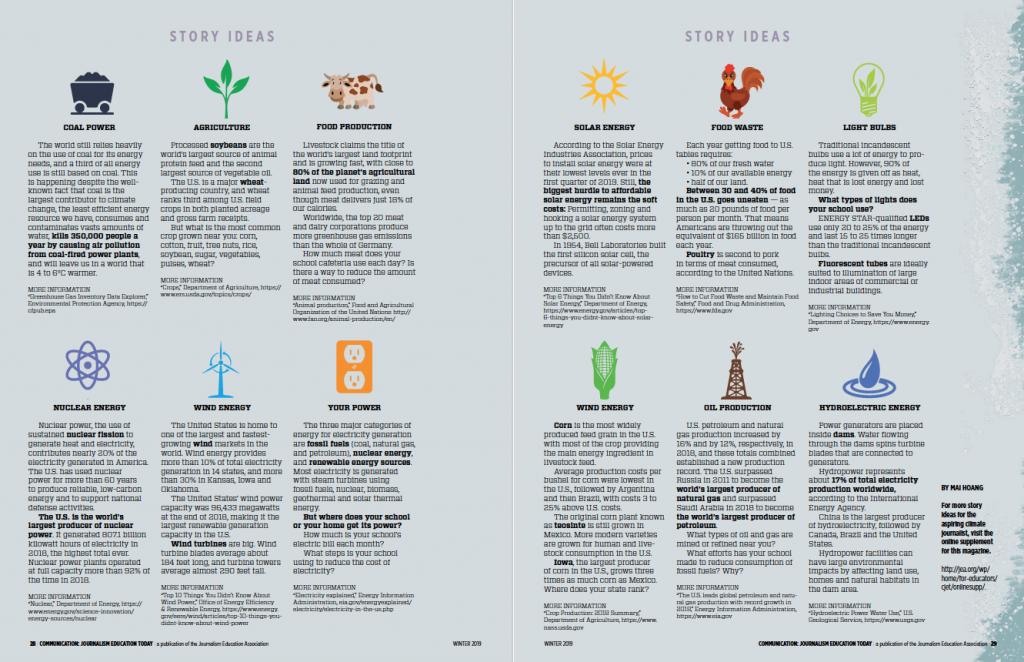 The winter 2019 issue featured a spread on story ideas related to climate change.

A quick look at climate change coverage in school newspapers, and even some local newspapers, shows that the issue is most featured in the “Opinions” section. Passionate student writers would outline facts and arguments about a national climate issue, hoping to convince the reader. Another common type of article is the “events” article, which may cover the content of a climate scientist’s speech during a school’s Earth Day, for example.

Missing still are in-depth, or “long form” articles, that give the readers a comprehensive view of climate change in their community and school. These stories, while definitely more challenging for the student writer, are also infinitely more rewarding when done well.

Below is a compilation of story ideas for the aspiring climate journalist who wants to tell stories that will have an impact. Of course, these are merely suggestions, and there are infinitely many more stories that need to be told surrounding climate change, climate impact and climate action. However, the list below shall serve as an adequate starting point for students to begin investigating.

Each story idea in this story spread includes two main sections: The Basics and The Creative. In the Basics, you will find suggestions for angles to frame your article, sample questions to ask yourself and your interviewees and suggestions for reliable sources. The Creative is for those who want to go further, increasing audience engagement via eye-catching graphics and multimedia devices.

Who are the culprits behind increasing greenhouse gas emissions and global warming? Check the EPA’s Greenhouse Gas inventory to find out. We’re tracing some of the major polluters and how you can frame articles surrounding them.

The world still relies heavily on the use of coal for its energy needs, and a third of all energy use is still based on coal. This is happening despite the well-known fact that is the largest contributor to climate change, the least efficient energy resource we have, consumes and contaminates vasts amounts of water, kills 350,000 people a year by causing air pollution from coal-fired power plants, and will leave us in a world that is 4 to 6°C warmer.

Livestock claims the title of the world’s largest land footprint and is growing fast, with close to 80% of the planet’s agricultural land now used for grazing and animal feed production, even though meat delivers just 18% of our calories.

The UN Climate Report identifies meat consumption as barrier to stay below 1.5°C. Aside from meat production, the agricultural sector worldwide contributes to global warming in other ways – producing 19-29% of global greenhouse gas emissions.

The Creative: some visualization ideas for the agriculture story

Aside from these big polluters, other sectors also contribute greatly to greenhouse gas emissions, including the transportation and chemical production industries, as outlined in the EPA report above. Any of these stories can be told using relatively similar article angles and framing questions.

Climate impacts, such as extreme weather events, heat waves, floods, droughts, will have a direct impact on human health and well-being. The burden is unequally distributed, and some communities are much worse hit than others due to their location or infrastructure.

The creative: some visualization ideas for the climate disaster story

Indirect impacts of climate change are also very important, such as changes in infectious disease patterns, air pollution, food insecurity or migration. These oftentimes prove to be the more long-lasting and devastating than the short-term effects. From 2008 to 2018, according to the Internal Displacement Monitoring Center, 265.3 million people “were displaced internally as a response to disasters.”

Furthermore, migrants are often times the more vulnerable groups of people in society, such as women and ethnic minorities. UN Development found that 80 percent of those displaced by climate change are women.

The creative: some visualization ideas for the climate disaster story

The Creative: some visualization ideas for the renewable energy story

The Creative: some visualization ideas for the climate action story