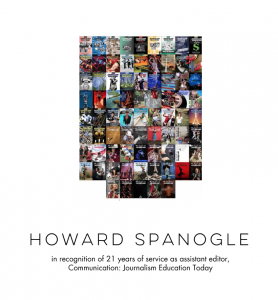 At the end of year, Howard Spanogle, long-time assistant editor for JEA’s magazine — Communication: Journalism Education Today — decided to retire. We celebrated his achievements. I produced a book for him highlighting all of the 77 issues he was a top editor for over 21 years (longer than most of our students have been alive). Sarah produced nifty little stickers what we shared at the Anaheim convention and then posted all over social media. It was just a little thank you on behalf of all of JEA’s 3,000 members.

Howard has been around the journalism education block and we knew his institutional and professional knowledge would be missed. Just look at some of Howard’s firsts.

As an aspiring student

As a newspaper adviser 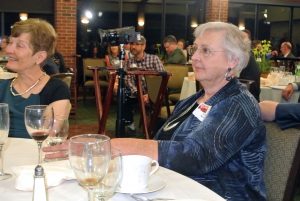 As a current retiree

This year, the changes continues. Connie Fulkerson announced her retirement effective in September 2020. Speaking of institutional knowledge, Connie IS the institutional knowledge. She has been with JEA since before JEA had an executive director. She expanded and maintained the bookstore. And talk about someone who can catch a modifier or a comma out of place. Whew.

Connie’s name first appeared in the masthead of the magazine in 2010, but she was a contributor long before then. She was (and is) ever vigilant at making sure that certifications were right and advisers were at the right schools when quoted (a challenge given the turnover in the profession). She always pushed us to think about how the JEA members would perceive things.

One challenge I have working with Connie is taking her picture. She is such a behind-the-scenes person that we have almost no pictures of her. Arrgh. 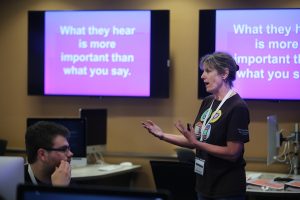 Beth Butler teachs interns about working in a newsroom during the Dow Jones News Fund Center for Editing Excellence at the University of Texas at Austin, 2019. Photo by Bradley Wilson

I’ve never been afraid of change. I enjoy it. In fact, sometimes it’s good to change even things that are working just to see if there is a better way. The change brought on by the Howard’s and Connie’s retirement opened a new door to bring in someone new, at least new to the JEA leadership ranks.

Beth Butler is not new to me. She and I have been working together for almost two decades at the Dow Jones News Fund Center for Editing Excellence at the University of Texas at Austin. Griff Singer, one of our mutual professors at UT-Austin, started the program in 1998 and he left us in charge when he retired. Every summer we work with what I consider to be the best and the brightest our college mass communication programs have to offer. And every summer, Beth starts it off by reminding students that their relationships with their co-workers will ultimately be more important than whether they catch the next spelling error. She talks about how to get along with supervisors as well as those work for you. She reminds us all of the importance of listening. “What they hear is more important than what you say,” she tells the interns.

Beth has worked at the Austin American-Statesman, the Idaho Falls Post Register, The Maui News and the Amarillo Globe-News as a copy editor, copy desk supervisor, page designer, headline writer, news editor and obituary writer. She got her bachelor’s (in advertising) and master’s (in journalism) degrees from the University of Texas at Austin.

Now, she works as an assistant professor and adjunct professor at Kent State University in North Canton, Ohio. She teaches Copy Editing, Media Writing, Newswriting, Principles of Advertising, Principles of Public Relations, Introduction to Mass Communication and Media Power and Culture. She also does a lot of work as a freelance editor.

And I have a lot of photos of Beth over the years. But that doesn’t mean she likes any of them.

Reach out to Beth. Tell her hi.