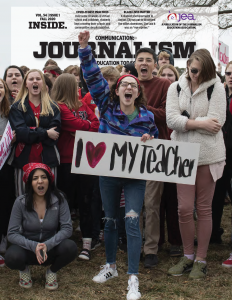 Last spring, the National Scholastic Press Association invited schools to submit material related to their coverage of COVID-19. Despite the fact that schools were closed, students had no access to servers and advisers couldn’t meet in person, some of the submissions illustrated best practices regardless of medium. | By Gary Lundgren

Prepare to be impressed.

VIEW all the contest winners.

VIEW the videos and interactive graphics mentioned in the magazine.

My life | For some instructors, being in isolation presented an opportunity. | By Shannon Oden • JEA curriculum link

In the field | Erin Ailworth, a correspondent with The Wall Street Journal, discusses how she covers breaking news. JEA curriculum link

Helping students write is the focus of the first major story in the summer 2020 issue. By Timothy Cain, CJE, the article is based on a session by Valerie Kibler, MJE, journalism instructor at Harrisonburg High School (Virginia), who shared tips and tricks to improve student writing based on Roy Peter Clark’s book, Writing Tools: 55 Essential Strategies for Every Writer, at last summer's Advisers Institute. JEA curriculum link 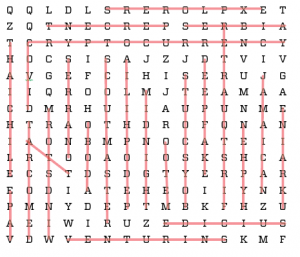 Stylebook updates | Every year, the Associated Press editors update the Stylebook. This excerpt includes some of the updates and two exercises. | By Bradley Wilson, MJE JEA curriculum link

As part of the section on the Associated Press Stylebook, JEA included a word finder. The answer key is here.

Have a little fun | Brian Wilson, MJE, shares some of his ideas for leadership and team building. | By Trisa Dyer JEA curriculum link

The first major story in the spring 2020 issue is over a piece of software that's been around for a while — Issuu. Many schools use Issuu to archive PDF files online or just to give their program an online presence. However, Issuu has evolved to be much more than just a way to put PDF files online. With the philosophy of "create once and share everywhere," as CEO Joe Hyrkin says, the software now work almost seamlessly with PDF files and within Adobe InDesign to create mobile versions of stories.

Look differently | Al Drago, a freelance photographer in Washington, D.C., shows how photographers can see even a monotonous situation in a variety of ways. | By Bradley Wilson, MJE JEA curriculum link

Words of the year — climate emergency, existential, they

Color of the year — Classic Blue 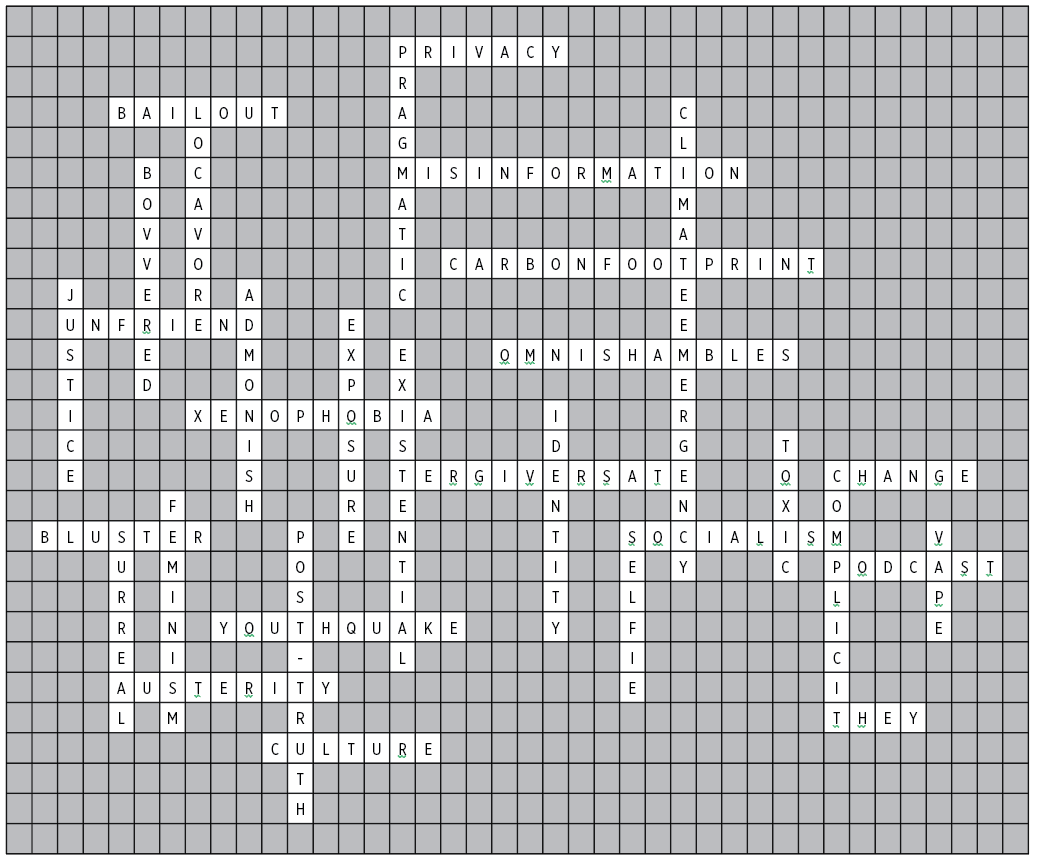 More than half of this 52-page issue is devoted to coverage of the environment and climate change. Take a look:

And to top it off, for the first time, the issue is printed on recycled paper.

WRITING SAY THIS, NOT THAT |  At this past summer’s JEA Advisers Institute, Kelly Furnas, MJE, talked about some common grammar mistakes almost everyone makes. | Susan Pavelka

THE MIRROR | Students at Van Nuys High School (California) cover everything from the homeless in their community to famous alumni from their school. | Gary Lundgren, NSPA

Watch for it in your mailbox in mid-November.

In the lead article, on the anniversary of the Stonewall riots, Adam Pawlus, executive director of NLGJA, The Association of LGBTQ Journalists, and Bethany Grace Howe, a recent graduate of the doctoral program at the University of Oregon, answer questions about how to cover the LGBTQ community in the school. And Logan Aimone gives an adviser's perspective on how to be honest, truthful and transparent.

Then various advisers and attorneys specializing in scholastic media law give advice on how to deal with takedown requests, when a student or staff member requests that material published online be taken down. 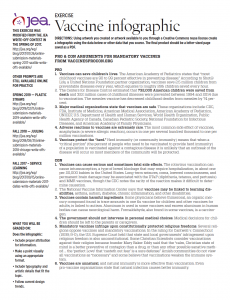 Also, Howard Spanogle takes a look at how students who compete in JEA's Write-off infographic competition learn by doing. So, here's an exercise created just to supplement this issue of C:JET. It's modified from the spring 2017 infographic contest.  DOWNLOAD IT here.

And, in a package devoted to creating quality podcasts, Jerred Zegelis discusses "J Room" and Ellen Cowhey discusses what Chris Waugaman told advisers about podcasts and audio recording during the JEA Advisers Institute.

In a peer-reviewed research article, Kristy Dekat looks back at how Kanas created legal support for students as part of what became the New Voices movement.

Watch for it in your mailbox in early September.

With bylaw changes that were approved by the Board, some Board members will be leaving their leadership positions after next year's elections. Some may choose to run again. Either way, some positions will be open for fresh faces. READ COMMENTARY BY CANDACE PERKINS BOWEN

But the Board is not the only place within JEA to see leadership changes. The flagship magazine — Communication: Journalism Education Today — will also see some changes after the retirement of two senior staff members. READ COMMENTARY BY BRADLEY WILSON 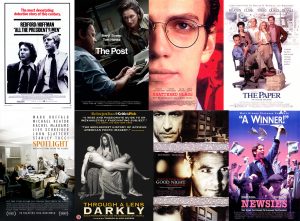 “While the temptation may be to think only of showing a film as a few easy class days, that approach limits student learning and smothers teacher vitality.” | Howard Spanogle, author, "Directors of the Screen" in spring 2007 issue

Movies in the classroom

Scholastic media instructors often find it useful to use documentaries or popular films in the classroom for educational purposes.

Instead, for each film, select discussion scenes, important results and journalism challenges. Plan appropriate questions after showing a short segment — five to 10 minutes. Consider using repeat segments later in the semester. The information about the actors and the historical background provides helpful details about the stature of each film as a major journalism film.

Being familiar with the background and the trivia details equips teachers to enhance the value of the film for their journalism students.

To that end, use each of the movie guides printed in Communication: Journalism Education Today to accent classroom instruction.

Guides provided include those for

And our feature story in this issue was "The Portable Document Format: Toward a paperless society." Back in 1978 Wilfrid Lancaster wrote about a paperless society. In 1990, one of the co-founders of Adobe, John Warnock, developed the Portable Document Format. PDF has not necessarily reduced the amount of paper businesses use, but it has made it easier to share documents electronically. | By Bradley Wilson, MJE JEA curriculum link

Building on the dream of a paperless office conceptualized five years earlier by F. Wilfrid Lancaster, PDF began as the pet project of one of Adobe’s founders, John Warnock. Initially it was an internal project at Adobe to create a file format so documents could be spread throughout the company and displayed on any computer using any operating system.

He began with a vision, living in an ideal world, a world without paper, starting with sharable tax forms, as early as 1984 along with the debut of the first Apple Laserwriter. The idea really did not move forward then, but by 1991, it moved to the forefront again.

In 1992, Adobe announced Version 1.0 of PDF at Comdex Fall, where the technology won a “Best of Comdex” award. Adobe released the tools to create and view PDF files, Acrobat, on June 15, 1993, advertising the release with an accompanying eight-page ad in The Wall Street Journal.

The article mentions quite a few resources for students and advisers, including original documents on the formation of PDF and the idea of the paperless society. Here are direct links to those references. 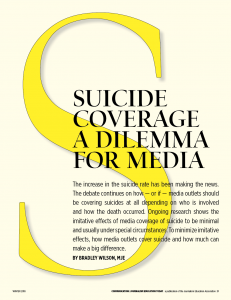 Jack Kennedy, MJE, a former JEA president and now Colorado Student Media Association executive director can be profound with the simplest of statements. The day the winter issue of C:JET hit his box was no exception.

"I just finished reading the Winter C:JET and wanted to thank you. Sometimes content just happens to fit perfectly with needs, and the wildly different focus topics of suicide coverage and typography are very timely for Colorado advisers."

"Suicide is a national health emergency and Colorado's suicide rate for young people is double the national average. I field emails and calls multiple times each month about best practices. My answers pale in comparison to this package."

As I wrote in the introduction to the package, "The increase in the suicide rate has been making the news. The debate continues on how — or if — media outlets should be covering suicides at all depending on who is involved and how the death occurred. Ongoing research shows the imitative effects of media coverage of suicide to be minimal and usually under special circumstances. To minimize imitative effects, how media outlets cover suicide and how much can make a big difference."

So, he asked if it were possible to make the package available more widely.

While we were considering how to deal with Jack's request, Katie Frazier, CJE, adviser at Mayde Creek High School (Houston, Texas) wrote on the JEAHELP email distribution list, "Over the weekend, we lost two students who were sisters (14 and 16) in an apparent murder-suicide; the girls' stepfather allegedly killed the two girls and then himself while the mother was not home."

As I wrote in the winter issue, "The increase in the suicide rate has been making the news. The debate continues on how — or if — media outlets should be covering suicides at all depending on who is involved and how the death occurred. Ongoing research shows the imitative effects of media coverage of suicide to be minimal and usually under special circumstances. To minimize imitative effects, how media outlets cover suicide and how much can make a big difference."

So, to all 3,000 members of JEA and others, here is an excerpt from the winter 2018 issue including 13 tips for media coverage of suicides, a model for Suicide Awareness Week, thoughts from advisers all over the country, case studies, sample policies, and academic research with guidance. 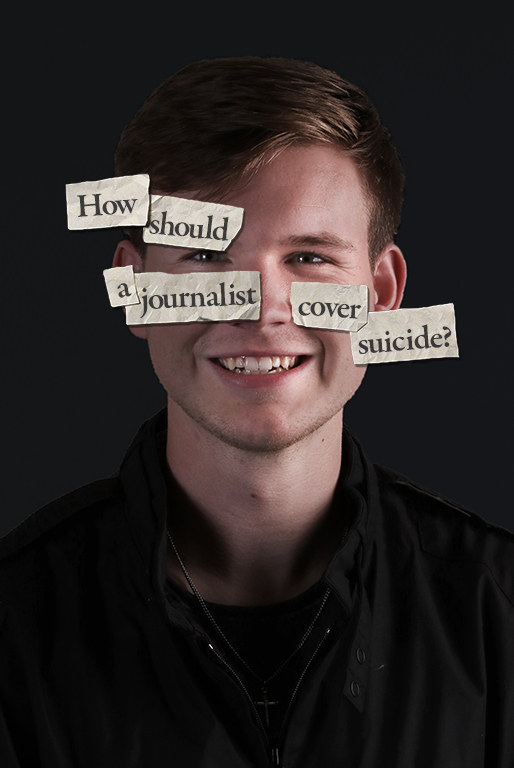 Recommendations for Reporting on Suicide

Suicide in the Media: A Quantitative Review of Studies Based on Nonfictional Stories. Stack, S. April 2005. The American Association of Suicidology. 35(2). 121-133.

The winter 2018 issue of JEA's flagship publication Communication: Journalism Education Today features a 17-package on how scholastic media can accurately, fairly and in a timely fashion cover a suicide at their school. The package features decades worth of research and, finally, 13 specific tips for such difficult coverage.

After two stories based on sessions at the JEA Advisers Institute, one by Erin Burden and one by Jenann Elias there are also two technology stories, one on TimelineJS by Nicole Smith and one on Steller by Jacqueline Rogers.

The second major package in the magazine is an in-depth package on making font choices by Bernadette Cranmer, MJE.

Not only does the package of stories include various sample of sophisticated typography from various high school publications, it includes a list of books for type nerds with commentary by Cranmer and a vocabulary list.

It also includes an exercise on typography on page 36. Here are the answers.

The information about the actors and the historical background provides helpful details about the stature of “The Post” as a major journalism film. Advisers should recognize the many details that director Steven Spielberg considered as he worked carefully to establish credibility for a film about the history of freedom of the press. Being familiar with the background and the trivia details equips advisers to enhance the value of the film for their journalism students.

“While the temptation may be to think only of showing a film as a few easy class days, that approach limits student learning and smothers teacher vitality.” Howard Spanogle, author, “Directors of the Screen” in spring 2007 issue

On page 11, students can crossword puzzle while doing background research and reading articles contained in this issue, complete the crossword puzzle. Here's the answer key to the puzzle. 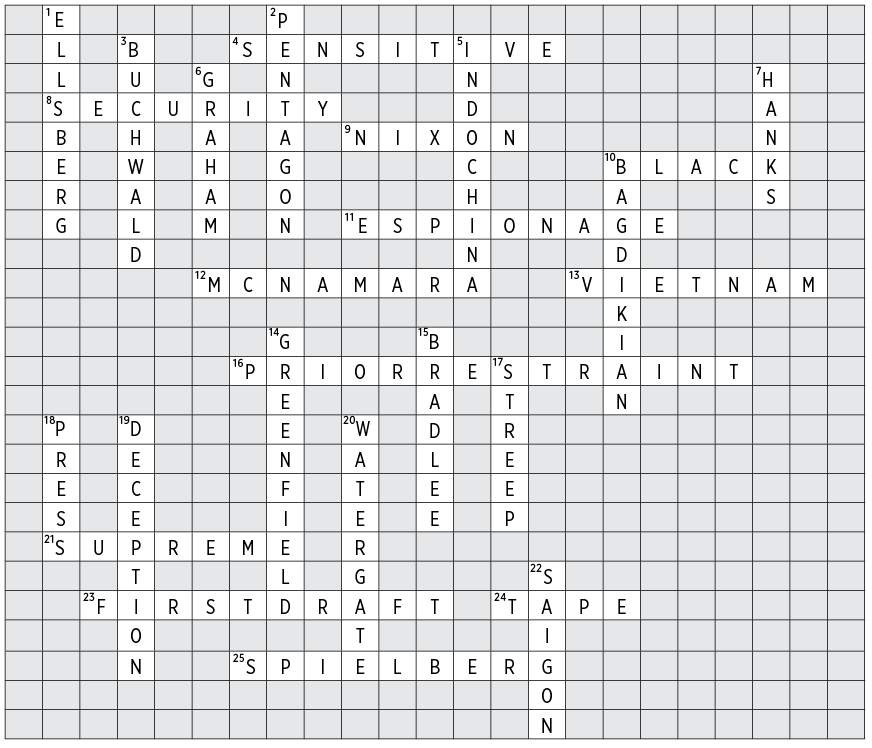 On pages 12-13, students can complete a chronological movie guide while watching the movie, ideally after having completed other exercises and having reviewed other material with the instructor. Here are the answers to the open-ended questions.

Carol Lange also published a guide to "The Post" for The Washington Post's Newspaper in Education program. VIEW IT HERE.