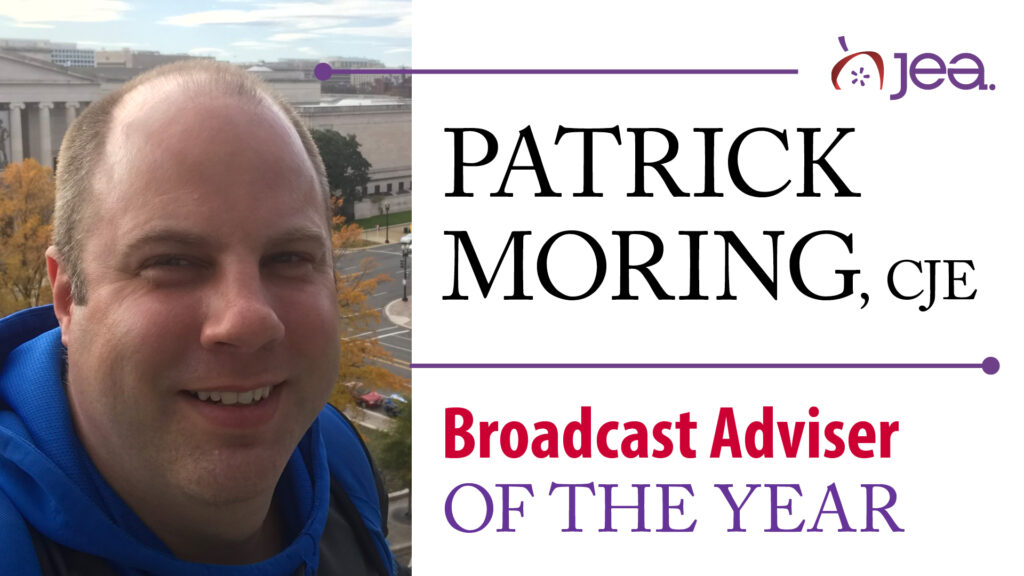 The Journalism Education Association has named Patrick Moring, CJE, of Rampart High School in Colorado Springs, Colorado, its 2022 Broadcast Adviser of the Year.

Moring receives a $1,000 prize, and his school receives $500, which may be used to buy equipment for the broadcast classroom or to fund student scholarships for summer media workshops.

“I think it is interesting to think that an inspiring person may not even realize the large impact that they have made on your life,” former Rampart High School student Jackson Champagne said. “Most adults have become so comfortable in their profession or lifestyle that they forget that the things they do on a daily basis can teach and inspire the people around them. Mr. Patrick Moring has done just that.”

Patrick Moring, CJE, has been advising broadcast video at Rampart High School for the last 14 years and has taken the video media program at Rampart from an after-school club to a full-time program, involving hundreds of students who build a weekly news show, short films and features, and one of the strongest live streaming broadcasts in all of Colorado. By doing so — and perhaps unknowingly — he has inspired not only his students, but also his colleagues.

“Patrick is phenomenal — a gem of a resource,” Rampart yearbook adviser Alexis Bailey said. “Many times this year, I have told colleagues and administrators in my building that ‘I want to be the Patrick Moring of yearbook someday.’ He is a kind, selfless, joyful human that is an absolute pleasure to be around, learn from and grow with. He is a brilliant teacher, friend and mentor to all who he encounters.”

In addition to inspiring his fellow advisers, no matter the publication, Moring has worked to protect advisers in the state of Colorado as well.

“Two years ago, I had the opportunity to testify in front of the Colorado house and senate education committees when the Colorado Student Media Association was lobbying to include the adviser protection clause to our current law,” Moring said. “It closed a loophole some districts were using to threaten advisers if the students published a story that the district did not like.

“There is nothing more important to me than making sure my students have a voice that never suffers from censorship or prior review.”

A champion for his students, colleagues and fellow advisers, Moring — in the words of his assistant principal, Michelle Tucker — is a visionary who thinks about the needs not only of the students at Rampart, but also of their families.

“His program reach extends far past the limits of our local site,” Tucker said. “As an acclaimed member of the high school sports broadcasting organization, The NHFS Network, our community, many of whom are military families, has an opportunity to share in the treasures of high school sports. Without Rampart’s participation in the network and Patrick’s dedication to supervise the journalist’s craft night after night, many families, like mine, forgo important youth experiences. Due to his direct support, my family and many others do not have to miss out on valuable, formative experiences. For that, I am evermore grateful.”

Moring’s impact on the entire Rampart High School community is incomparable, but at the core of his mission is his students.

“A good teacher can completely change a student’s life,” Champagne said, “and that’s what Mr. Moring did to mine.”

“People have lost trust in the news media. They don’t believe national media and in many cases their own local media,” Terry Cassreino, CJE, said. “A strong high school student media program, I believe, is the first step in turning this around.”

“I can tell you that the work Terry’s students do every day is nothing short of amazing. I know,” WLBT-TV anchor and reporter Howard Ballou said. “I have visited his class, met with his students, seen their enthusiasm for their work and watched their weekly newscasts. His students and their work is that good.”

Cassreino lends his expertise — built upon his experiences as a journalist and media professional — to Bruin Sports Radio, Bruin Streaming TV, The Bear Facts, Bruin News Now, JV Bruin News Now, and the The Shield yearbook. In each of these endeavors, Cassreino teaches his students to put emphasis on the community they cover, trusting them to practice ethical decision-making as they create their publications and grow as human beings.
“If a student can graduate high school and feel conﬁdent that they are a good writer and speaker, who is fair, punctual, ethical, and a good leader, what more could they ask of their institution or their instructors?” Carolyn Erwin, parent of one of Cassreino’s students said. “These are life skills that will carry the graduate throughout college and into their career, no matter the ﬁeld.”

“As teenagers, there is no better feeling than an experienced advisor treating you as if you are an experienced professional and letting you put your input on tough calls that will not only affect us, but our entire publication,” Sarah Connor and Lakin Zamorano, OneMaize Media editors said.

Spencer O’Daniel, MJE, adviser at Maize Career Academy in Maize, Kansas, is the type of adviser every student deserves — one that empowers them to feel heard and valued as the professional journalists they are. At the Maize Career Academy, O’Daniel has done just that — the OneMaize broadcast highlights the achievements of all schools in the district and is viewed in classrooms across the district, Pre-K to 12th grade.

“Our students are devoted to their work outside of school hours, regularly working at night shooting games, conducting interviews on the weekend or even shooting b-roll during their lunch period when it calls for it,” O’Daniel said. “Their investigative and data collecting process mirrors college and professional journalists and they are asked to synthesize and evaluate information from both sides of an argument to come up with a conclusion-opinion-reaction where they decide how to convey their message to the student body and community.”

“He is always learning and mentoring,” web and digital instructor at Maize Career Academy Vicki Klaker said. “He is open to learning as much from those he is mentoring as they are learning from him. Being a journalism adviser is like running one of those muddy, obstacle course half-marathons. Even though it’s hard, Spencer perseveres until he and his students make it. He puts in the work to make things happen and doesn’t expect anything to be handed to him. I admire Spencer’s strength. He’s a great role model for his students and colleagues.”

A dingy eight-by-12 closet. No walls. No partitions. No editing stations.

This is what Zack Gorman started with when he and the team at Holbrook Community Access and Media walked into Holbrook Middle High School. They wanted to start an after-school program, and instead of seeing challenges Gorman and a team of five students only saw potential.

From the early days of Holbrook High News nine years ago, to Code Blue News today, Gorman finds potential — and nurtures that potential — every single day. Part of his ability to help his students realize their potential is his emphasis on the student.

“As an educator Mr. Gorman has always been one to stress the importance of facilitating over direct involvement,” the Code Blue News team said, “thus allowing his students to become self-sufficient. This prioritization of collaboration has strengthened the team and ensured the sustainability of our program.”

The show may only be 15 minutes long, but Gorman finds his greatest enjoyment in high school journalism at the end of those 15 minutes every Friday.

“That moment is full of many emotions, which vary from week to week,” Gorman said. “The mood depends on the quality of the show. On a great week, it is an adrenaline rush full of joy and celebration. I am fortunate to see the high fives as well as the genuine laughter that is shared. I also get to witness the empathy young adults develop when another student makes a mistake costing the whole team a ‘perfect’ show.”

From an eight-by-12 closet and five students, to a five full or half-credit courses, Gorman’s emphasis on celebration, empathy and empowerment is what defines the broadcast program at Holbrook Middle High School. And because of Gorman, it’s a definition that remains full of potential.