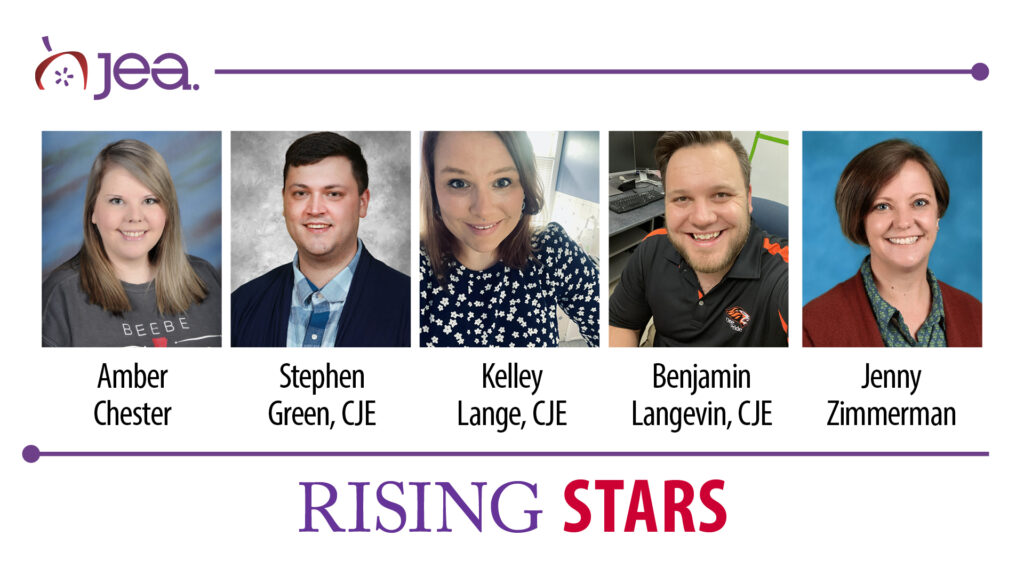 The Journalism Education Association names five teachers with its Rising Star Award to honor their commitment to scholastic journalism and media advising. They will be recognized at the Fall JEA/NSPA National High School Journalism Convention.

Rising Star awards are presented to advisers who are in their first five years of advising a school media program, have shown dedication to scholastic journalism and have had success advising at least one media program.

This class of Rising Stars stands out as they faced challenges as new teachers during the pandemic and not only managed to help their media programs survive but thrive.

After receiving a bachelor’s degree in secondary education from Arkansas Tech University in 2012, Amber Chester began her journalism career working as a Jostens Inc. sales associate. She assisted in training new and experienced advisers in Central Arkansas for five years before becoming an educator at Beebe High School in Arkansas.

“I do not come from a journalism background,” Chester said. “In fact, I wasn’t even on yearbook staff in high school. However, I have always had an interest in yearbooks.”

As a yearbook sales associate, Chester helped train new and experienced advisers, and in that time, she learned from the best how to interact and train her own students.

“I had the opportunity to get to know Margaret Sorrows, CJE, while she was advising at Bryant High School,” Chester said. “I was amazed at how Sorrows was able to inspire her students to become phenomenal journalists.”

After teaching and training with her role at Jostens’ and seeing journalism teachers like Sorrows in action, Chester decided to get her teaching certificate with a journalism endorsement.

As a rookie adviser, Chester genuinely understands the obstacles that new advisers face. In 2020, Chester’s yearbook staff received a CSPA Silver Crown and the 2021 Badger received All-American with Four Marks of Distinction from NSPA.

“In the four years as the adviser of the Badger yearbook, Amber has proven herself an extraordinary teacher and adviser,” Sorrows said. “She emphasizes journalism excellence by clearly demonstrating a commitment to journalism education, maintaining the credibility of the yearbook.”

Stephen Green, CJE, inherited a converged media program at Caney Creek High School struggling under years of neglect. To revitalize the program, he built every system, skill and institutional knowledge from scratch.

“There is one word consistently used to describe our high school by those in the area that know us: grit,” Green said. “Our students are survivors of many things — poverty, home life, natural disaster and pandemic. That applies to their journalism and how this organization functions. They want something to do and do it well.”

Over the past five years, Caney Creek Student Media’s three publications The Prowler newspaper, The Creek yearbook and TheProwler.net have one numerous local, state and national awards.

In addition to building an award-winning media program, Green coaches debate, coordinates University Interscholastic League academic competitive teams, serves as secretary for the Texas Advisers of Journalism Education and recently completed a master’s degree in journalism education. In 2021, he was named a TAJE Pathfinder.

“One of the qualities I admire the most is his willingness to share his talent, his knowledge, or his skills for whatever you are working on,” Caney Creek Student Media co-adviser Leigh Anne Treistman said. “He’s worked hard to share his vision with both staff and students and has branched out to help us be represented in several professional organizations. He makes it look easy. It’s not. Our kids are performing well under his leadership no matter which role he is in; we are very fortunate to have this kind of talent at our school.”

During her short tenure as a media adviser, Lange revamped the journalism curriculum to bring back the student newspaper and revive a failing yearbook program.

“Kelley has devoted immeasurable amounts of her time both inside and outside of the classroom to bring the Ralston High School yearbook program from barely existing to excelling,” mentor and Bellevue East High School adviser Stephenie Conley, MJE, said. “I cannot emphasize enough how Kelley continually led her yearbook staff with superior character and integrity, as well as with superior knowledge skills and abilities, proving over and over to be someone on which the students, administration and community could always go to for her expertise.”

As soon as she was hired as yearbook adviser in 2019, she began recruiting students and connecting them with educational opportunities at summer workshops and Nebraska High School Press Association. Lange immersed herself in development opportunities as well, participating in the JEA Partner Program and Mentoring Program, and attending Balfour Adviser and Student Yearbook Camp.

“I was immediately impressed by Kelley’s enthusiasm and desire to jump in the deep end,” said Marsha Kalkowski, MJE, JEA state director for Nebraska and adviser at Omaha Marian High School. “She is an obvious cheerleader for her students and her program through social media and that is truly fun to see. She advocates for her students at every turn and understands the role of a yearbook in providing resources and opportunities for students and advisers and the community at large.”

“My greatest enjoyment in advising and teaching has been to see the students get excited about a story and then run with it, tackling all of the obstacles in their way with passion while utilizing the knowledge, skills and abilities they have developed as student journalists,” Lange said. “I love seeing them do ‘journalism’ on their own, without second guessing themselves.”

Ben Langevin, CJE, has advised student journalism for the past five years at both the high school and middle school level.

“As an adviser, and former basketball coach, I see my role as a facilitator and liaison between administration and students,” he said. “Students are responsible for 100% of the writing, photography, design and coverage of both the newspaper and yearbook. I step in only when asked to and even then I lay out options and allow for students to make the decisions they see fit. If they don’t have ownership of the paper, I am robbing them of the opportunity of learning and finding the joy that developing and producing good journalistic work brings.”

Langevin encourages his students to find all sides of an issue and make sure every voice is heard.

“His students are confident that they have a voice because he not only allows it, but demands it, and gets the best from each young journalist in his room,” Walsworth Yearbooks sales representative Tracy de la Feuilliez, CJE, said. “When a school in his same county was met with First Amendment and censorship issues, Ben stood up for the school, backed their decision and showed strength to help overturn the school board’s decision to censor the yearbook’s content.”

Langevin encourages students to use their voice in other areas as well. One of his students applied and was selected to attend the Student Press Law Center’s New Voices Student Leaders Institute this summer and another was named a Florida Scholastic Press Association Student Journalist of the Year finalist.

“When I first met Jenny, she and her staff were close to completing the 2021 Hilltopper —Jenny’s first yearbook,” Zimmerman’s mentor Brenda Gorsuch, MJE, said. “What a terrible year to begin advising a yearbook staff! She and a handful of students were forced to work remotely to gather most of the content for the book. Photographers were unable to attend school events, and most interviews had to be done by email or phone. Most of the advisers I work with wanted to quit after 2021, but Jenny was unfazed. After all the challenges, she was even more determined to establish a successful yearbook program at North Buncombe.”

Gorsuch described previous editions of the yearbook as a scrapbook with photographs but little to no text. She said Zimmerman was determined to turn the yearbook into an award-winning, journalist publication.

“She constantly pushes our staff to do our best and to always make sure we’re putting our best foot forward,” 2023 Editor-in-Chief Lorena Alamo said. “She doesn’t stray from the opportunity to give us the constructive criticism we need and emphasizes the importance of it as we all have room to learn and grow.”

When she took over, Zimmer developed a three-year plan that included areas of theme development, coverage, photography, writing and design. In 2022 — only one year later — the yearbook staff received a Tar Heel Award as one of the state’s best yearbooks and two broadcast students won major awards.

“Jenny and her students are truly overachievers,” Gorsuch said. “What Jenny thought would take three years, became reality in one year. She convinced her staff to take on the challenge of producing a journalistic yearbook. In a very short amount of time, Jenny has become an accomplished publications adviser.”