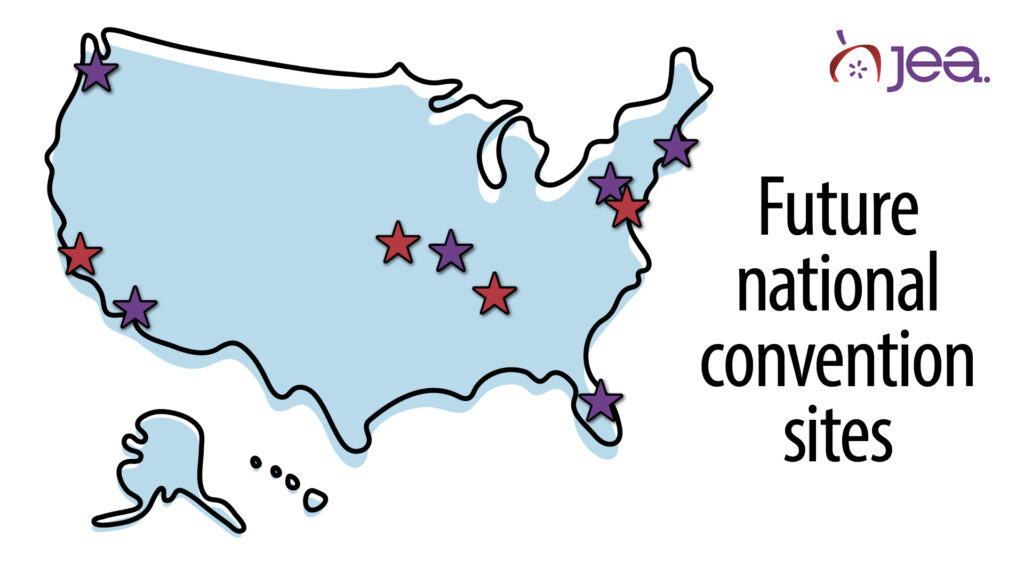 The JEA/NSPA National High School Journalism Convention will return to missed convention sites in Seattle and Philadelphia in future years.

While only one national convention was canceled due to the pandemic in 2020 and 2021, three conventions moved to online platforms, leaving the on-site convention locations vacant and respective contracts in danger of defaulting.

JEA and NSPA leaders worked with the contracted hotels and convention centers to renegotiate the national convention contracts without incurring penalties. The negotiations and new contracts saved JEA and NSPA millions of dollars.

Another scheduling issue developed in early 2021 when the fall 2024 national convention site, the Marriott Wardman Park in Washington, D.C., closed permanently. The Wardman Park contract became void, but JEA and NSPA had also contracted the Omni Shoreham Hotel as an overflow hotel and that contract was still active.

“JEA and NSPA leaders worked together through each contract negotiation to preserve our organizations’ funds and also preserve our relationships with incredible convention venues,” said JEA Executive Director Kelly Glasscock, CJE. “We were able to accomplish both goals for the benefit of advisers and their students. The JEA/NSPA National High School Journalism Convention has a strong future in great locations as a result of those behind-the-scenes discussions.”

The Seattle contract has moved to spring 2025. The Philadelphia contract has moved to fall 2024 to fill the vacancy of the Washington, D.C. Wardman Park. Additionally, The Washington Hilton will become the main convention hotel, with the Omni Shoreham Hotel serving as the overflow hotel for a fall 2028 Washington, D.C. convention date, and JEA Advisers Institute is contracted to meet at the Omni Shoreham Hotel in 2023.

“Advisers are putting plans in motion now to attend conventions in St. Louis and San Francisco, but we know in the bigger picture it’s helpful for members to see the long term schedule,” said JEA President Sarah Nichols, MJE. “So much happened behind the scenes in the past two years, and we want to make sure everyone knows how the location changes came about. The strategic negotiations from JEA and NSPA directors positioned us to have smooth and successful conventions for years to come.”

The contract adjustment of Nashville from spring 2020 to fall 2029 and the shift of Orlando from fall 2020 to fall of 2030 were announced previously.