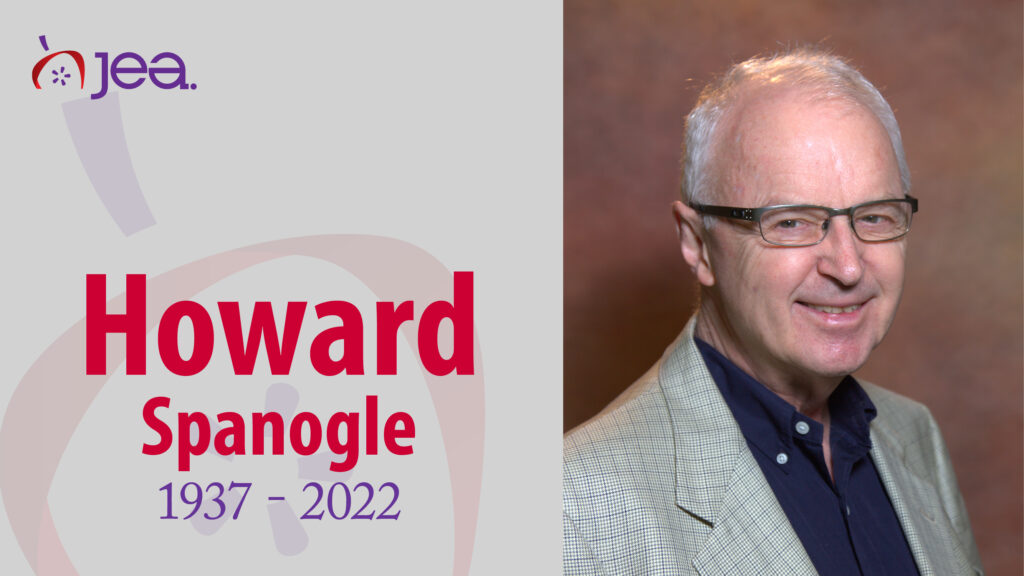 As former JEA Executive Director Linda Puntney, MJE, said, “He was a force to be reckoned with.” And, she added, “He is also a mentor and a friend.”

From 1982-1989, he and student staffers produced Teenagers Themselves, three books containing more than 300 student media experiences. The books gave the nation insight into what students of the time were thinking and drew publicity from the Phil Donahue Show, the Chicago Sun-Times, the Chicago Tribune, The Oprah Winfrey Show and Good Morning America.

In 2015, he helped organize an Echo alumni reunion; about 200 former students returned to celebrate their time on the student newspaper.

Spanogle received JEA’s highest award, the Carl Towley Award, in 1993 and the Medal of Merit in 1983.

In the summer of 2000, Spanogle started as copy editor of JEA’s flagship magazine — Communication: Journalism Education Today. As noted in a celebration on his retirement in 2019, he edited 77 issues, 3,148 pages of copy and the work of 1,271 contributors in 652 story packages. Later, he donated funds to make an online index of the articles and, ultimately, a way to access PDF copies of individual articles.

“Magazine readers should not underestimate the impact Spanogle had on the magazine over the years,” Bradley Wilson, MJE, editor, said. “He influenced everything from word choice to choice of articles. As so many others have said, I learned so much from him about the power of words and attention to detail. He never could settle for second best or for less than perfect. He was always so patient working with me and hundreds of magazine contributors to make the magazine the best it could be.”

He is survived by his wife of 63 years and 10 months, Juanita Grace Long Spanogle.

A memorial service has not yet been planned.