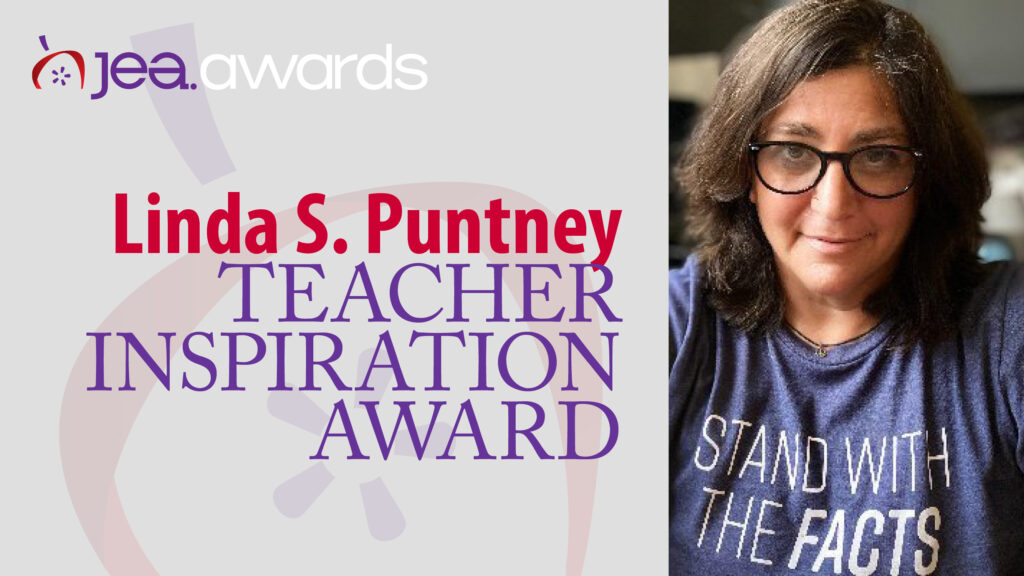 This award recognizes a teacher who, through the teaching and/or advising of journalism, inspired others to pursue journalism teaching as a career and who has made a positive difference in the teaching community.

Kraft will be formally recognized July 11-14 at the JEA Advisers Institute.

“A teacher who genuinely impacts a student’s life is one who not only imparts knowledge and wisdom, but someone who also takes an interest in their student’s life and does whatever they can to lift them higher,” Sheridan Hendrix, higher education reporter at the Columbus Dispatch, said. “That teacher is someone who understands the challenges their student might face and works with them to overcome barriers. And they are someone who is passionate about their work, instilling that same love for the subject in their students. Dr. Nicole Kraft is the perfect combination of those things.”

An award-winning reporter, editor and magazine journalist, Kraft worked as a sports writer for the Associated Press, an editor at Hoof Beats magazine, and a design editor and special projects reporter at the Napa Valley Register. She has also spent years in academia, teaching at multiple universities, winning teaching awards from the Association for Education in Journalism and Mass Communication and Tech Advocate.

Kraft has made an impact in her 25 years as a journalist, not only with her storytelling, but also with her teaching.

“Like any other time I didn’t know what to do with my life, I went to Dr. Kraft’s office hours,” Owen Milnes said. “This time, I went after turning down two offered reporting jobs because they just didn’t feel right to me. She was flabbergasted as to why I turned them down, because to her, I had everything it took to succeed in journalism. It was because of her that I had those traits. I sat across from her at her desk and said to her, ‘I just want to be a reporter,’ and she looked at me and replied, ‘No you don’t.’ I was confused. Of course I wanted to be a reporter, it’s what I had been for the past two years and it was a bit late to change majors and find something new. She elaborated further: ‘If you really wanted to be a reporter, you would’ve taken one of those two jobs and figured it out from there.’ I didn’t have a response, but deep down, even if it took me a while to realize, I knew she was right. She continued, ‘You are a natural teacher. You really have something there, don’t give up on the teaching thing.’ That message struck a chord.”

Milnes, currently a reporter at a local business publication, volunteers with The Ohio State’s journalism department, but is currently on a path to follow in Kraft’s footsteps as a journalism educator.

Former student Michael Lee also found himself inspired to pursue scholastic journalism education as a result of his time as Kraft’s student.

“After I graduated from Ohio State, I decided to pursue a master’s degree in journalism at Northwestern University in hopes of teaching college journalism in the future,” Lee said. “And a large part of my reason to do so was because of the warmth and passion Nicole had towards her students — including me. Attending [office hours] and watching her walk me through stories I’d written for her class, and watching her do the same with other students, inspired me to pursue a path where I could do the same — teaching and molding the next generation of young journalists.”

In addition to inspiring Milnes to pursue a career in journalism education, Kraft has inspired scores of journalism students and working reporters with her teaching style and dedication to both her students and the craft.

“Not once did I ever feel I was simply being lectured to or another number in her class,” former student Devin Smith said, “but as if I was the most important student she has ever had whenever I was blessed to share time with her. In a world in which it is sink or swim, especially on a university level, Dr. Kraft took the most impetus to make sure everyone could swim with what they had, and helped to improve all aspects of our journalism careers in the most hands-on way possible.”

Anecdotes from Kraft’s students paint a picture of an educator that does not set out to inspire, but rather does so by simply being herself: powerful, honest and warm. These traits, in addition to her expertise in both education and the field of journalism, make her a worthy recipient of the 2022 Linda S. Puntney Teacher Inspiration Award.