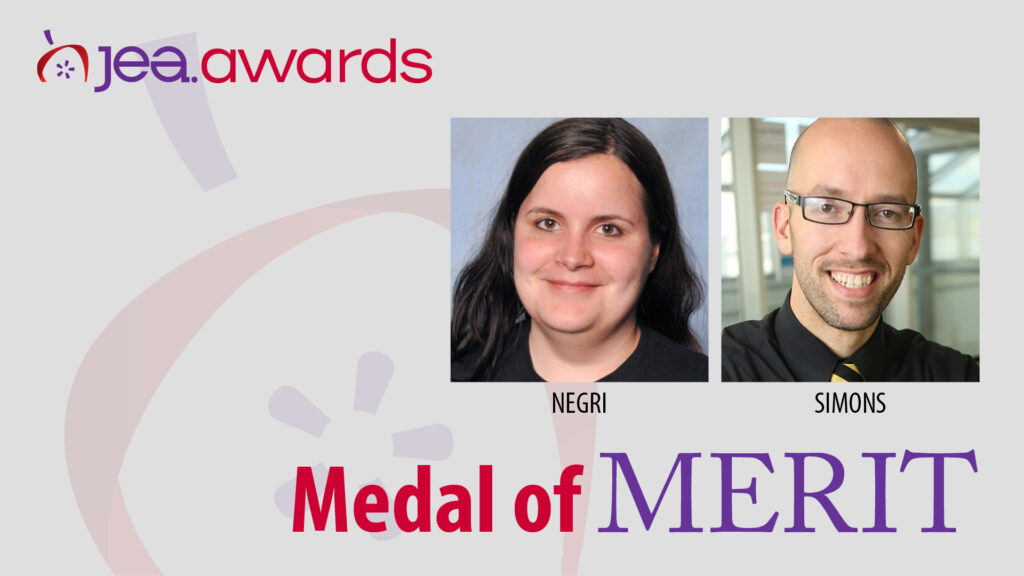 Two individuals who have contributed significantly to the Journalism Education Association and to scholastic journalism throughout their careers are 2021 Medal of Merit recipients.

The yearbook adviser at Bellaire High School, Negri not only contributes her time and talent to her own students, but also to students around the state, playing an ongoing role in lobbying for passage of New Voices in Texas and serving as the contest director for the TAJE and secretary of the Association of Texas Photography Instructors.

The hardships produced by the pandemic created a feeling of uncertainty for scholastic journalism programs and organizations across the country. Despite those obstacles, Negri found a way to serve her organization.

“Each year Andrea gets thousands of entries that she organizes and routes to judges (that she finds), and even a worldwide pandemic couldn’t stop her from directing the contest. In fact, she even improved the contest during the pandemic,” Interscholastic Press League Conference Director Jeanne Acton said.

As a “go-to person,” they do not come more reliable than Negri.

“She’s one of the people our members contact most with questions,” TAJE President Alyssa Boehringer said. “After our executive director, she’s the one they call or email the most. She creates more content for social media than our social media people. She’s the first face many people see as they come off the escalator at the Texas Association of Journalism Educators fall convention. She’s greeting them with a smile, giving them their contest materials and begging them to volunteer to judge one of dozens of on-site contests so that Texas journalists will have the best convention experience possible. And they can’t say no to her.”

Negri spends countless hours creating and organizing experiences from student journalists across the state, all while getting her master’s degree in journalism education so that she can become an even better teacher, adviser and mentor.

“Andrea is one of those people you know you can just count on,” ATPI Executive Director Mark Murray said. “And even if her plate is full she is always willing to help where help is needed. We don’t recognize folks like this as often as we should, but they are what help our organizations thrive.”

“It’s no exaggeration to say he can do (and does) it all,” Faust said.

“He’s a resource to many, generous beyond belief and involved in supporting others through convention sessions, his listserv responses, a powerful yearbook podcast and more. Anyone really watching would consider him the ultimate servant leader,” Herff Jones Inc. representative Dan Mueller, CJE, said.

Simons is equally and enthusiastically involved with JEA, National Scholastic Press Association, CSPAA and the New Voices New York campaign, but his true passion for scholastic journalism lies in working directly with students and advisers, helping them to fall in love with their publications.

“His questions and suggestions encourage them to rethink and revise rather than accepting their first attempts,” Mueller said. “I truly believe he wants to make the world of scholastic journalism a better place — and I have watched him achieve that goal in city after city, year after year.”

While he technically only advises his own students on the Tesserae staff, Simons is a mentor to every single student and adviser that crosses his path. His passion for the craft is impressive, to say the very least, but what’s even more impressive is the way he chooses to share that passion with others.

“Mike is a lover of people, a lover of students, and a lover of this crazy world we call yearbook,” Faust said. “He is the animated, passionate, thoughtful, driven, enthusiastic, dedicated and devoted example of exactly what a publications adviser should be.”