JEA honors Kizner as Administrator of the Year

JEA honors Kizner as Administrator of the Year 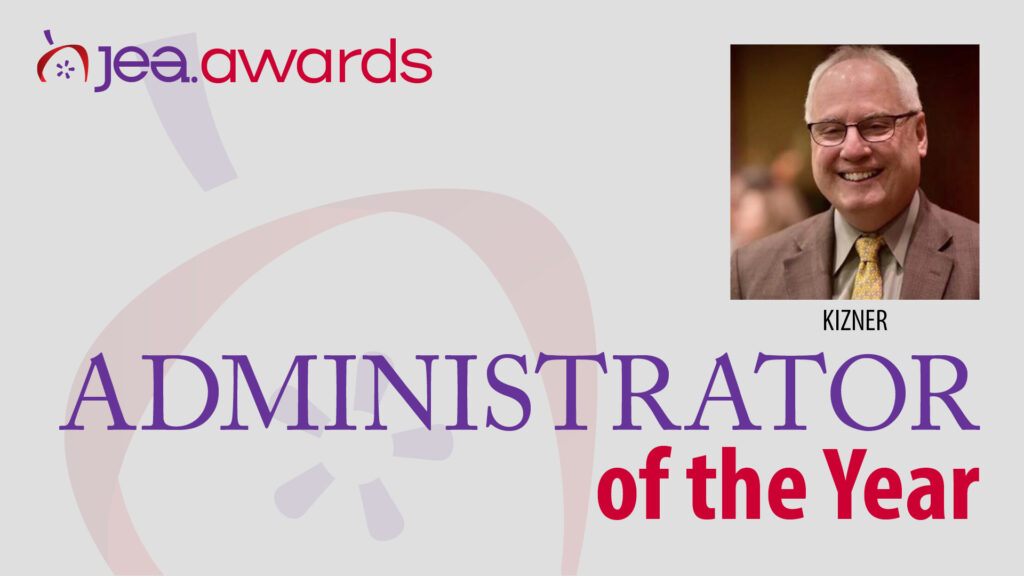 JEA presents the award to administrators who have shown a dedication to journalism education.

“So often these administrator awards from journalism associations are given to principals or superintendents who have helped a journalism program get through a trying moment,” Harrisonburg (Virginia) High School adviser Valerie Kibler, MJE, said. “I feel it’s just as important to recognize an administrator who hits the ground running in support of scholastic media. When that strong foundational relationship is built, the work that we do in the journalism classroom can only flourish.”

Advisers and scholastic journalists alike know that successful programs are built on relationships. By creating foundational relationships built on trust, Kizner demonstrates exceptional leadership for students, staff and families in his counties, showing them that superintendents can be partners in education, not figures of fear.

“Dr. Kizner has been incredibly involved in SCPS’s media programs, and not in a bad way,” 2020 editor-in-chief of the Talon newsmagazine at Colonial Forge High School Aynsleigh Escher said. “Instead of excessive censorship, Kizner has allowed free media coverage. Instead of avoiding interviews, Kizner welcomes every opportunity to speak with student media. Instead of sitting back and watching students’ first amendment rights get trampled, he attends rallies in the students’ defense.”

Kizner’s support of student journalists goes beyond speaking with students and allowing free media coverage. He believes that all students in Virginia should have the same rights as those in his school system. As a result, Kizner has become one of the most vocal proponents of the Virginia New Voices legislation.

“As in everything else he does, Dr. Kizner went above and beyond,” Colonial Forge yearbook adviser Tiffany Kopcak, CJE, said. “He wrote and submitted testimony. He agreed to come testify at the state house hearing — an hour away from our county. At the state house, Dr. Kizner waited for hours with us, chatting happily with students. He spoke clearly and eloquently, in contrast with the lobbyists from The School Superintendents Association, who were against the policy.”

In 2014, when he was serving as superintendent of Harrisonburg City Public Schools, Kizner made the commitment to travel with Harrisonburg High School media students to the Fall JEA/NSPA National High School Journalism Convention in Washington, D.C. Not only did he agree to chaperone, but he worked with Harrisonburg High School principal Cynthia Prieto and print editor-in-chief of the Newsstreak, Mia Karr, to develop a presentation for a session at the convention entitled “How to Get Along with Your Administration.” Collaborations such as this are what makes Kizner an exceptional superintendent, administrator and role model.

“In my 33-year career, I’ve rarely experienced such a supportive superintendent when it comes to scholastic media,” Kibler said. “In fact, he is one of the most student-centered leaders I’ve ever known. Dr. Scott Kizner gets it and this country could use a million more superintendents just like him.”