Atkinson of Kansas named the 2021 JEA Journalist of the Year

Atkinson of Kansas named the 2021 JEA Journalist of the Year 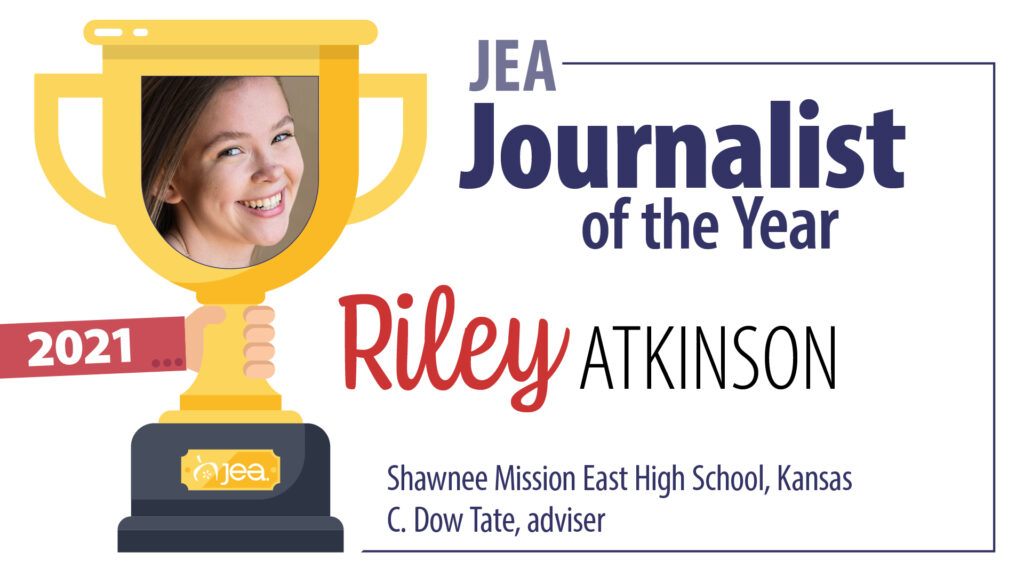 By Joe Humphrey, MJE, Journalist of the Year coordinator

Riley Atkinson’s high school journalism journey started on an espresso-stained, saggy sofa in the back of the newsroom at Shawnee Mission East High School in Prairie Village, Kansas.

“I sat there when I first learned how to export an InDesign document, how to tighten a three-hour-long board meeting into 500 words and how to bounce back after tough critiques,” she said in a personal narrative as part of her JEA Journalist of the Year application. “Class periods flew by while I tried to perfect my new love of storytelling. That couch watched my voice shake and my notepad fill with scribbled-down quotes during my first interview.

“The version of me that the couch saw was nowhere near a leader,” she continued. “But as the interviews progressed, the stories got tougher and I climbed my way up the editorial ladder, I started to become the opposite.”

She grew more confident, shedding a shy personality and blossoming into a storyteller and leader that today the Journalism Education Association is recognizing as its 2021 Journalist of the Year.

Atkinson is online co-editor in chief of and a copy editor for The Harbinger at Shawnee Mission East. She previously served as assistant online editor and the A&E online editor. Adviser C. Dow Tate praised Atkinson for her work ethic, her leadership and a willingness to seek out feedback and grow from it.

“Riley’s leadership started before she got the online editor title,” Tate said. “In (spring 2020), when the school district froze grades and so many kids checked out mentally, she led a core group of staff members to not miss a beat turning out three 32-page publications and keeping the website fresh with new content that provided some connection to a community splintered by COVID-19.”

As editor, leading a staff of more than 70 students, Tate said Atkinson strives to provide “some normalcy and connection for the school in very disconnected times.”

“Whether she’s leading a masked-up group of writers and editors for a deadline night in socially-distanced lawn chairs in a Prairie Village neighborhood or a Saturday morning Zoom story idea brainstorming session, Riley’s driven to keep this staff together and on deadline.”

In addition to her work on campus, Atkinson writes for a local magazine, Mission Hills Living. Owner-publisher Lindsay Dandoy praised Atkinson’s professionalism and storytelling for a series of profiles on young achievers.

“Riley has a knack for developing articles that are interesting and engaging to her readers,” Dandoy said. “Riley composes stories in a way that allows the reader to feel as if she has known the individual for years.”

“Every part of your portfolio demonstrates that you are the kind of editor every school publication should have,” said Bretton Zinger, MJE, of Massachusetts, one of 22 Journalist of the Year jurors. “You produce outstanding work, but you also coach young staffers and develop systems and procedures that push the program in the right direction for after you are gone.”

While that old couch is gone now and Atkinson will soon be too (she’s headed to the University of Arkansas to study advertising and public relations), juror Leslie Thompson, CJE, of Colorado, noted the following in her feedback: “The legacy you leave at The Harbinger will last for a long time.”

From an incredibly competitive field of entries, judges also selected three runners-up, who each will receive $850 scholarships.

Eddy Binford-Ross of Oregon was named one of Oregon’s most impactful people of 2020 by The Corvalis Advocate for her reporting on protests. She is a runner-up for the 2021 JEA Journalist of the Year award.

Eddy (Elizabeth) Binford-Ross is editor in chief of the Clypian at South Salem High School in Salem, Oregon, but her work covering protests in Portland last summer had a reach far beyond the Pacific Northwest campus. It appeared in national media and even sparked a feature in The Washington Post, who documented her reporting in the face of tear gas and stun grenades.

“When most of the high school students were off for summer break, Eddy was doing what a journalist must do to document the news, including covering protests and riots,” adviser Brian Eriksen, CJE, said. “This is not something that she did just one time, it was coverage that took place from May of last year and continues today. This coverage included not only live reporting but also included long hours, late nights and early morning editing of stories and pictures.”

Contest juror Jack Kennedy, MJE, of Colorado, hailed the Oregon Student Journalist of the Year for professionalism and the depth of her reporting on tough issues.

“I know long, in-depth pieces are out of fashion, with our tendency to see student readers as incapable of paying attention for more than a few moments, but the importance of the topics you have reported on and your inclusion of many of the options that online reporting has provided kept me riveted to those longer stories,” Kennedy said.

Binford-Ross plans to attend Georgetown University in Washington, D.C., where she wants to write for The Hoya and intends to fight on behalf of journalists.

“I want to work on … legislation solidifying specific press protections into statute and helping to further ensure respect for and understanding of our First Amendment rights,” she said. “Hopefully, my work in D.C. will bring positive changes to the community, just like it did here. Although, preferably, with a lot less stun grenades and tear gas.”

In Texas, Grant Johnson leads the broadcast program at a brand new school. “I could have stayed … with the well-established program but realized the special opportunity that I had to build something from the ground up,” he said.

Johnson is a 2021 JEA Journalist of the Year runner-up.

“He studies the news. He messages, networks and builds great relationships with industry professionals to hone his craft,” she said. “As a student of journalism, Grant takes what he learns and transfers that knowledge to his fellow students.”

Johnson’s work has been honored by multiple organizations, including the National Scholastic Press Association, University Interscholastic League in Texas, Quill and Scroll, and the Association of Texas Photography Instructors.

Juror Rebekah Goode of Georgia said Johnson’s portfolio would get him hired in most local newsrooms.

“And he hasn’t even been to college yet!” Goode said. “From his emotional backstory to the energy he gives in every aspect of journalism, Grant is giving us his all. He is multi-talented, curious and more than capable.”

Johnson, who plans to major in broadcast journalism, said personal tragedies in his own life helped him find his own passion for storytelling.

“There is nothing like walking through a house of a family who lost everything to a lightning strike, hearing the story of a childhood cancer survivor as he recounts his experience or listening to someone who lost their loved one in a drunk driving accident to inspire compassion in others,” Johnson said.

California’s Anna Vazhaeparambil describes her portfolio as a culmination of moments “from the literal sidelines of my community — the sidelines of volleyball games, school assemblies and even national politics.”

Vazhaeparambil is a 2021 JEA Journalist of the Year runner-up.

Anna Vazhaeparambil is co-editor of the Harker Aquila at The Harker School in San Jose, California. She got her start as a sports writer and made improving that section a priority.

“I noticed a large gap in our reporting, primarily of our junior varsity athletes and many of our female sports teams,” she said. “While we would cover every single football game, for example, there would only be one or two articles written about softball or girls water polo.”

Correcting those blind spots became a clear goal, and one example of the need for diverse reporting and fair, inclusive representation that she would extend to her later work as a political reporter.

“From heavy-hitting political stories to play-by-play sports and election night reporting to covering the emotion and energy of a protests, you are tenacious and intrepid,” juror Ava Butzu of Michigan, said.

“While the portfolio shines in all areas,” he said, “the amount of work dedicated to running and improving her staff is incredible. Anna is clearly a top-notch leader, and the organization and effort put into her job will pay off for this staff well beyond her time there.”

Adviser Ellen Austin, MJE, credits the editor for her leadership in the early days of the COVID-19 shutdown.

“I asked the leadership team whether they wanted to dial things back or proceed ahead. In a time of crisis that hit teenagers especially hard, Anna led the charge to say we needed to do more, publish more, create more content in order to help inform, comfort and unite our community in this once-in-a-century challenge,” Austin said.

“She’s who I love writing stories with, she’s who I always go to for a laugh and she’s my journalism partner-in-crime,” Rammohan said. “It’s special to watch younger reporters mature and flourish, but I think it’s almost more significant to watch a close friend and peer grow from a fledgling writer into a talented, headstrong leader.”

The JEA Journalist of the Year competition starts at the state level, with possible winners from 52 qualifying contests (one per state, plus Washington, D.C., and an international division) eligible for the JEA competition and scholarship. This year, JEA received 33 entries.

A 22-member jury of volunteers evaluated entries based on the 11 areas outlined on the competition rubric. Each participant was endorsed by a JEA member adviser. Click on the links below to view each state winner’s portfolio.

JEA Journalist of the Year finalists and state winners were recognized April 10 in a video presentation during the Spring JEA/NSPA National High School Journalism Convention.