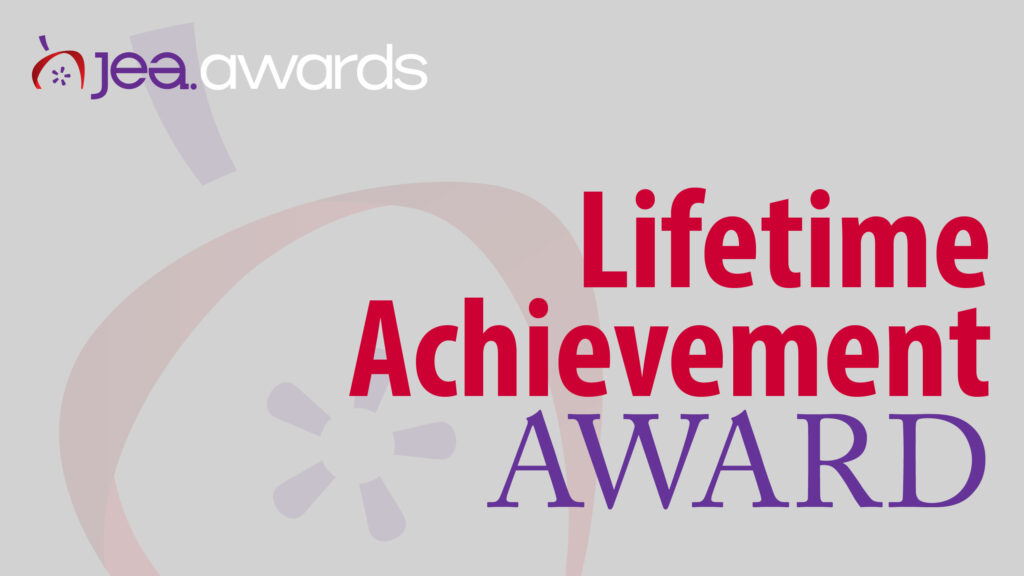 Pam Bunka, Jack Denker and Lori Oglesbee-Petter are advisers who have contributed significantly to scholastic journalism throughout their careers. They will receive the Journalism Education Association’s Lifetime Achievement Award and be recognized in a video presentation April 10, as part of the Spring JEA/NSPA National High School Journalism Convention.

Bunka spent 42 years advising yearbook, newspaper and online news at Fenton High School in Fenton, Michigan, before her retirement in 2019.

“Pam is a slam dunk choice for this honor just based on the many awards both she, as an adviser — Golden Pen from MIPA is a big deal — and her staff earned,” Casey Nichols, MJE, said. “But honestly, knowing Pam she’d prefer the recognition for the day to day teaching and learning that took place in her classroom. She’s a great and influential adviser on a national scale, but even greater on the Fenton High School level where she compiled a lifetime of achievements impacting student lives.”

Since her retirement, Bunka has continued to impact student lives, devoting her energy and experience to the Michigan Interscholastic Press Association, serving as yearbook chair, building membership, responding to listserv queries, and most importantly, undertaking to gather samples of exemplary student work for 40 individual categories, with visuals and explanations of what makes the work standout.

“Pam is driven whole-heartedly to put her students and her colleagues before herself, before any program or award,” said nominator and Grand Blanc High School adviser Ava Butzu. “It’s no surprise that she was a college cheerleader — and while she still fits into that cheer uniform, she has taken on her own uniform as a cheerleader for MIPA and for scholastic journalism.”

Denker has spent a career as a professional in both journalism and education. For the last 27 years, Denker advised both yearbook and newspaper — 15 at Nebraska City High School, Nebraska City, Nebraska, and 12 at Fremont High School, Fremont, Nebraska. He also served on the Nebraska High School Press Association executive board for three years and has often served as an informal mentor to many and a supportive friend to the advisers in his region.

“In all honesty, Jack Denker has been a bit of a burr in my saddle,” said nominator and Omaha Marian High School adviser Marsha Kalkowski, MJE. “I realize now that Jack is an organizational force to be reckoned with. I am jealous of his record-keeping skills and his professionalism. He is setting a powerfully positive example to his students. His word is as good as gold, and his reputation is hard to beat.”

Denker’s professionalism and dedication inspired his students to achieve more than they thought possible.

“I worked closely with Jack throughout my time on the Rustler, and I can say without a shadow of doubt that credit for my success must go to him,”  former student Austin Knippelmeir said. “He demanded a lot of me and called me out when I let my work ethic slip throughout times as a part of the Rustler and that push gave me the motivation to get better and better each year.”

“Lori Oglesbee has earned a long list of titles and descriptors,” said nominator and Association of Texas Photography Instructors director Mark Murray. “Dedicated adviser. Fierce advocate for student First Amendment rights. Crown and Pacemaker recipient. Yearbook Adviser of the Year. JEA board member. SIPA board member. Workshop and convention presenter. Signature laugh. Big personality. But nearly anyone who has followed her career as a teacher and journalism adviser in Louisiana, Arkansas and Texas would agree on one thing: She has a big heart.”

Oglesbee, who advised at McKinney High School, McKinney, Texas, and Prosper High School, Prosper, Texas, has spent a career devoted to scholastic journalism; teaching not only her own students, but thousands of others, serving as a keynote speaker and presenter at more than 150 media workshops, universities and conventions across the country.

“Lori is not the ‘shut up and mind your own business’ type — either on the giving or receiving end,” Bobby Hawthorne said. “She believes to the marrow in the redemptive power of journalism, both as a teaching tool, as a life experience and as a civic moral obligation, and she has spent her career pursuing the loftiest goals and promoting the highest standards.”

Oglesbee uses her big personality and big heart to harness the power of journalism and inspire all of her colleagues, friends and students.

“I was in her classroom practically every day, whether that was to practice UIL prompts with her, write or edit stories for our school newspaper, or just to talk,” former student Neha Madhira said.  “I fell in love with reporting, and Ms. O helped me find and strengthen my voice. She is a true warrior.”