McCarthy named the 2020 Broadcast Adviser of the Year

McCarthy named the 2020 Broadcast Adviser of the Year 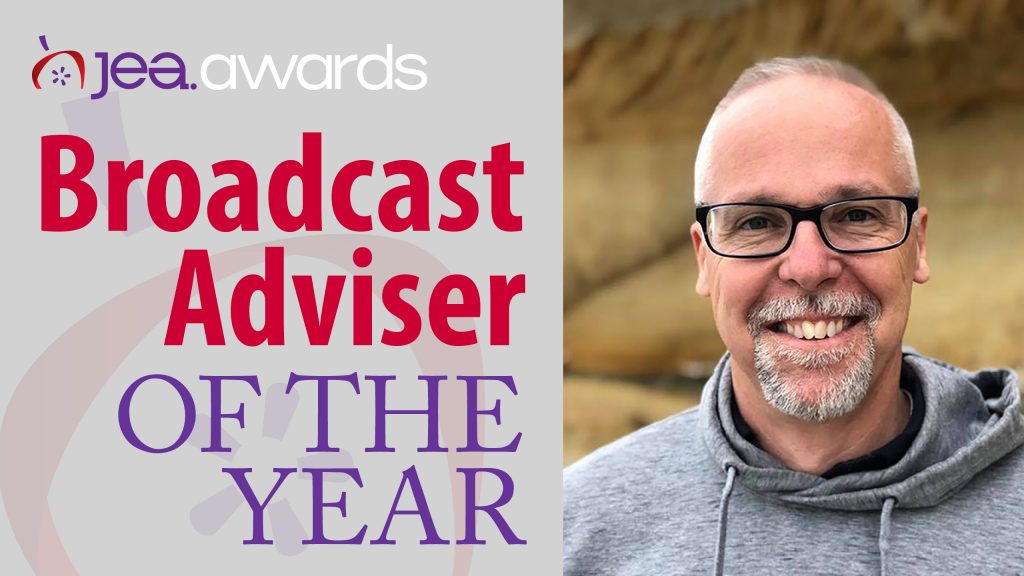 The Journalism Education Association has named Jim McCarthy of Joseph A. Gregori High School in Modesto, California, its 2020 Broadcast Adviser of the Year. Involved in publications since he began teaching in 1998, McCarthy describes himself as “very project oriented,” a mindset that has not only served him well, but also the members of the scholastic journalism community at large.

JEA leaders surprised McCarthy with the announcement during a virtual faculty meeting, Sept. 24.

The honorees will be recognized during a virtual awards ceremony on Nov. 21. McCarthy will receive a $1,000 prize, and his school will receive $500, which may be used to buy equipment for the broadcast classroom or to fund student scholarships for summer media workshops.

Insau’s school also will receive $500 for broadcast equipment or to fund student scholarships to summer workshops.

Together with 2015 Broadcast Adviser of the Year, Don Goble, McCarthy developed a video program at the Gloria Shields Workshop from the ground up.

“Jim is enthusiastic about sharing his ideas and experiences with others,” Goble said. “It’s never about himself or his program, but always about improving scholastic broadcast journalism and developing his students’ skills. Jim’s contributions to several scholastic journalism listservs, online communities, and professional organizations shows a clear track record of doing so.”

A champion of student press freedom, McCarthy empowers his students to work with and not against administrators as they pursue stories important to school communities all over the country.

“My students are taught to respect the balance between the First Amendment and the SPJ Code of Ethics,” McCarthy said.

It is this sense of importance and responsibility that helps administrators see the value in scholastic journalism.

“It is the hard-hitting news stories that I recall have had a lifelong impact on the student journalists and thousands of students and staff that tune in to watch each week’s episode of JNN,” said Jeff Albritton Stanislaus County Office of Education assistant superintendent.

McCarthy’s greatest joy in advising comes from what he calls the “shared birthday” of publication dates, when the students’ hard work is finally broadcast with the school community. It is no wonder that his students — past, present and future — value the trust he had in them.

“Mr. McCarthy always knows when to take a hands-on approach to educating students, but more importantly he knows that, as an adviser, he is not in charge of what JNN would be; that is left to his students,” said Katherine Swartz former student and 2018 NSPA Broadcast Journalist of the Year. “I never had a teacher in high school who gave me the independence and trusted me in the way Mr. McCarthy did.”

High school students are not the only students that benefit from McCarthy’s passion and expertise. Fellow adviser and JEA Northern California president Rod Satterthwaite, MJE, has come to see McCarthy as both a teacher and an invaluable resource for broadcast journalism in the region.

“Sitting in on one of his sessions is like taking a master class on teaching broadcast journalism,” Satterthwaite said. “He is a thought leader in the field in so many ways and gives readily of his knowledge, taking the time to mentor fellow advisers and help students from other schools improve their craft. He is the Broadcast Adviser of the Year we all need.”

The word most often used to describe 2020 Distinguished Broadcast Adviser Christina Insua is inspirational. As broadcast adviser at Christopher Columbus High School in Miami, Florida, Insua has inspired not only her students, but parents, professional journalists, administrators and colleagues.

“From the beginning, Ms. Insua instilled in me a passion for the craft,” Politico News Developer Andrew Briz said. “I wasn’t a reporter for fun. I was doing it because I believed in its purpose: the ability to tell stories that brought some good into the world.”

Joe Humphrey, MJE, former adviser at Hillsborough High School in Tampa, Florida, got to see this inspiration as both a colleague and a parent.

“Columbus students produce some of the best storytelling, and that is the result of Christina’s journalism background and ability to inspire students,” he said. “I was able to witness this all first-hand last summer when my son and I attended the CCNN Live broadcast journalism camp for middle school students.”

Insua reaches her students because she cares about them, not just as reporters, but as people.

“She was there for my son the day he underwent surgery,” said Jiliann De Villiers, parent of a former student, “lifted his spirits when life was kicking him down and was instrumental in helping him find his passion for broadcast journalism.”

“I had to change students’ perception of the class; we were going to work and learn about journalism.”

This was the first step Terry Cassreino, CJE, and Special Recognition Broadcast Adviser, took in his scholastic journalism journey at Saint Joseph Catholic School in Madison, Mississippi. But before he could lay the foundation for a massively successful program, Cassreino had to recruit both students and supporters.

“He started developing a pipeline of talent by teaching English in the school’s seventh and eighth grades,” Mississippi Scholastic Press Association Executive Director R.J. Morgan, CJE, said. “Then he lobbied local businesses and media outlets to help him fund a new broadcast program.”

Cassreino has used his previous experience as a journalist to set a high standard for his students while at the same time fostering a culture of teamwork.

“When watching the professionalism of Bruin News Now, it is easy to forget that it is written, produced, anchored, reported and edited by students,” said Ronnie Agnew, executive director of Mississippi Public Broadcasting.

“I would argue,” Morgan said, “there may not be a scholastic broadcast program in the country that serves its audience better or in more ways than Bruin News Now.”