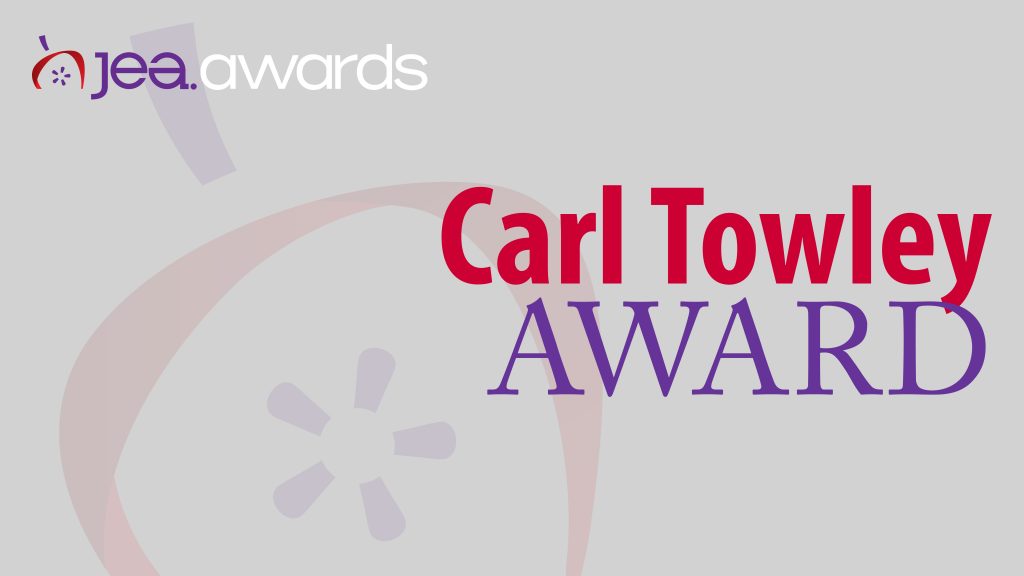 “Connie knows JEA like no one else,” retired Texas journalism teacher Wayna Polk, MJE, said. “During my nine years of serving in an elected position on the JEA board, Connie was my person.”

During her 32 years with the organization, Fulkerson has served in numerous ways including administrative assistant, bookstore manager, copy editor for multiple publications, awards coordinator and convention program designer and scheduler.

“Every one of those who have known and worked with Connie over the years know that she can be considered a potent glue who has helped hold JEA together for decades,” said Mary Kay Downes, MJE and adviser at Chantilly (Virginia) High School. “Modest and self-effacing, Connie is an outstanding example of a dedicated servant-leader that large organizations need in order to keep their focus and do the best work for their members.”

Beyond just the job description, Fulkerson, in the words of former JEA Executive Director Linda S. Puntney, MJE, is “the heart of JEA. Fulkerson has been historian, copy editor, AP style guru and convention program creator.”

As Fulkerson prepares to retire, she also has prepared to leave behind a detailed manual, covering every aspect of her role in JEA.

“Her institutional knowledge of the inner workings of JEA and its programming is unsurpassed,” said Nancy Y. Smith, MJE and chair of JEA’s National Student Media Contests.

“Being a hero doesn’t mean Fulkerson is in the limelight,” Puntney said. “Rather, she works tirelessly behind the scenes to make things nearly perfect for everyone. That’s the way it has always been.”

Fulkerson has served as a mentor, a jack-of-all-trades and an adviser whisperer.

“Think about all the ways we have interacted with Connie over the years,” said Mark Murray, executive director of the Association of Texas Photography Instructors. “Directly, she has communicated with all of us who have volunteered to speak at the national convention. We’ve worked with her when we purchased things from the JEA Bookstore. And we probably talked with her if we called the office with a question. She has been instrumental in almost all of our dealings with JEA.

“Can anyone even think of JEA without thinking of Connie?”

During his time in office, JEA Past President Mark Newton, MJE, relied on Fulkerson as his sounding board for insights on programming, policy, performance and budgeting — all key to JEA’s success as an organization.

“She is JEA,” Newton said, “and, without a doubt, she is deserving of this incredible honor because she is incredible.”

Fulkerson will be recognized during the Fall JEA/NSPA National High School Journalism Convention in November. She retires from JEA headquarters staff Sept. 18.