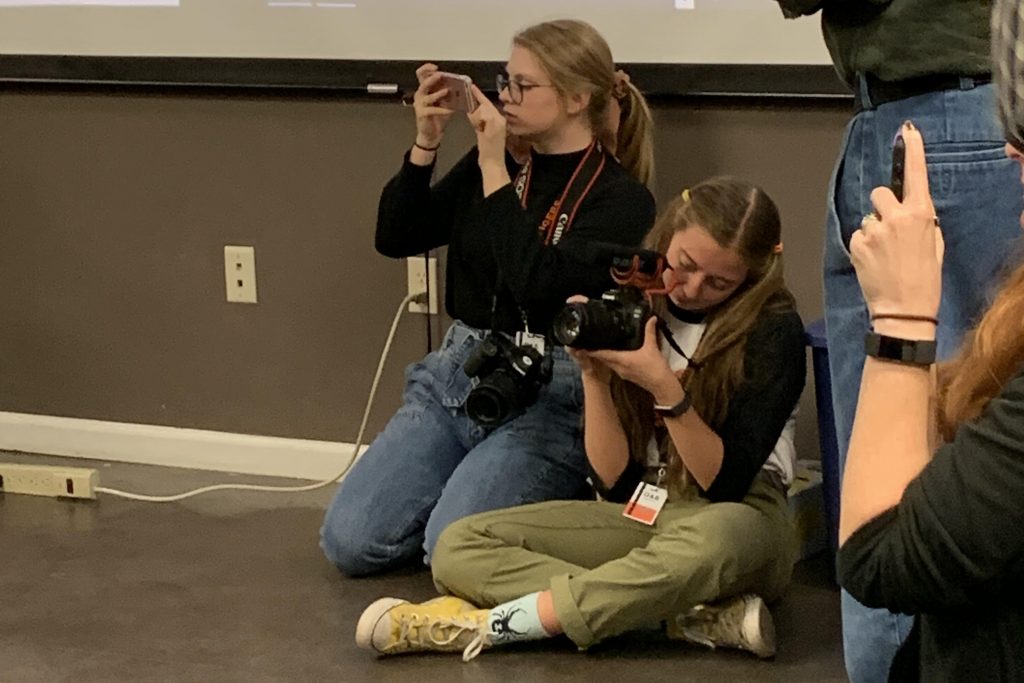 Seniors Delaney Kidd and Annika Sisac report from campaign headquarters on Nov. 5, 2019. The Orange & Black student journalists were waiting for results on a local bond measure, which would fund a new Grand Junction High School. The bond measure failed.

The Journalism Education Association and Quill and Scroll International Honorary Society for High School Journalists have named the Orange & Black staff at Grand Junction (Colorado) High School as winner of the 2020 Student Journalist Impact Award. The staff is advised by Megan Fromm, Ph.D. and MJE.

The Orange & Black staff produced a 28-page special issue to alert the community about the dilapidated condition of Grand Junction High School. After obtaining a baseline structural report from the district through an open records request, students discovered that the building has an anticipated life-span of zero to five years. The foundation of the school is sinking, and needed repairs are too costly because of asbestos and old wiring. Old uranium mill tailings under the school give off varying levels of radiation.

The staff’s in-depth reporting exposed problems including mice and cockroach infestations in the building, and plumbing and heating/cooling systems antiquated to the point of being unable to be replaced. In their Impact award entry, they noted that any repairs are like putting Band-Aids on a major wound.

Grand Junction principal Meghan Roenicke wrote in her letter of support, “Our student journalists took it upon themselves to create awareness within our community regarding the condition of our building in an issue dedicated to shedding light on the condition of the soil, the environmental hazards contained within the building, and the safety concerns of having over 70 entrances and exits. Their diligence in investigating, revising and reporting the facts and concerns of students helped shape the political conversation of our entire community in the 2019 election.”

The Orange & Black staff reported that the building has the most non-secure entrances of any school in the district. The school of 1,400 students is located in the heart of the city and has seven buildings. They said that exterior doors often remain unlocked open and vulnerable to security breaches.

Roenicke said she was interviewed multiple times over eight weeks as the students investigated and produced the special issue. “The sense of pride and empowerment sparked by the recognition of not only our building conditions, but also our journalistic programming inspired staff and students alike. Students throughout our school staged a walkout to protest the conditions of our school, and staff became motivated to campaign for a new building.”

Superintendent Diana Sirko, Ph.D., said that the work of the student journalists described the condition of the 63-year-old school in such graphic and understandable detail that it inspired the Board of Education and a committee that had been assembled to study the issue to move from discussion to action.

“While we narrowly lost the election, any advances we made during the election can be traced back to the students’ descriptions,” Sirko wrote. She said that those descriptions are still remembered and quoted by many community members who are encouraging the district to go, again, for a new school.

Although the bond vote failed, steps have already been taken to address the concerns brought to light by the Orange & Black reporting.

“Since the original publication, the school board has approved an additional $2 million to improve the security and condition of our entrances and bathrooms,” Roenicke said. “While this is not the extent of the work that needs completed, we would not even have these improvements if not for the initiative of the students of the Orange & Black.”

Erin McIntyre, publisher of the Ouray County Plaindealer, also supported the staff’s entry. “It wasn’t until student journalists reported on the conditions of the school building that the school district —  and the community — started the conversation over whether the school needed replacing,” McIntyre wrote. “In their reporting, students learned to ask for public records, to advocate for the release of information and consider the purpose of their reporting.”

McIntyre noted that the Daily Sentinel, the largest newspaper in western Colorado, elected to reprint two of the stories from the Orange & Black special issue, giving the student journalists a bigger audience.

“Those of us who worked at the Sentinel at the time, including myself, discussed whether it was better to reprint what they had already published or embark on our own project,” McIntyre wrote. “They had already done the work, and it was solid. Why not let the students who spend 40 hours a week in the building tell the story themselves?”

The editor’s note that accompanied the student work in the Sentinel read, “We hope you’re as impressed and enlightened by the work of these students as we are. If their work is any indication, the future of journalism is bright.”

The staff of the Orange & Black is the 22nd recipient of this award. The JEA Student Journalism Impact Award was created in 1993 to recognize a secondary school student or team of students who, through the study and practice of journalism, have made a significant difference in their own lives, the lives of others, the school they attend and/or the community in which they reside. The Impact Award recognizes student writing that brings issues to the forefront and from the walls of the high school to the world at large.

This is the second year JEA and Quill and Scroll have teamed up to judge entries and present the award.

“The students at Grand Junction performed that most valuable of journalistic functions: They identified a problem, thoroughly researched how it came to be, presented the information in easily digestible, but clearly understood, forms, and spurred a community to act on and improve the situation,” Quill and Scroll Executive Director Jeff Browne, MJE, said, “And even though the voters of Mesa County eventually failed the students at GJHS, the effect of the stories remains, and the community the students empowered remains committed to improving the education of their children and peers. Bravo to Dr. Fromm and the journalists of the Orange & Black.”

The award will be presented April 16, which would have been the opening day of the JEA/NSPA Spring National High School Journalism Convention in Nashville, Tennessee. The convention was canceled due to the COVID-19 pandemic.

Quill and Scroll, founded in 1926, encourages, supports and recognizes individual student initiative and achievement in scholastic journalism, regardless of the medium. It is headquartered at the University of Iowa in Iowa City, Iowa.