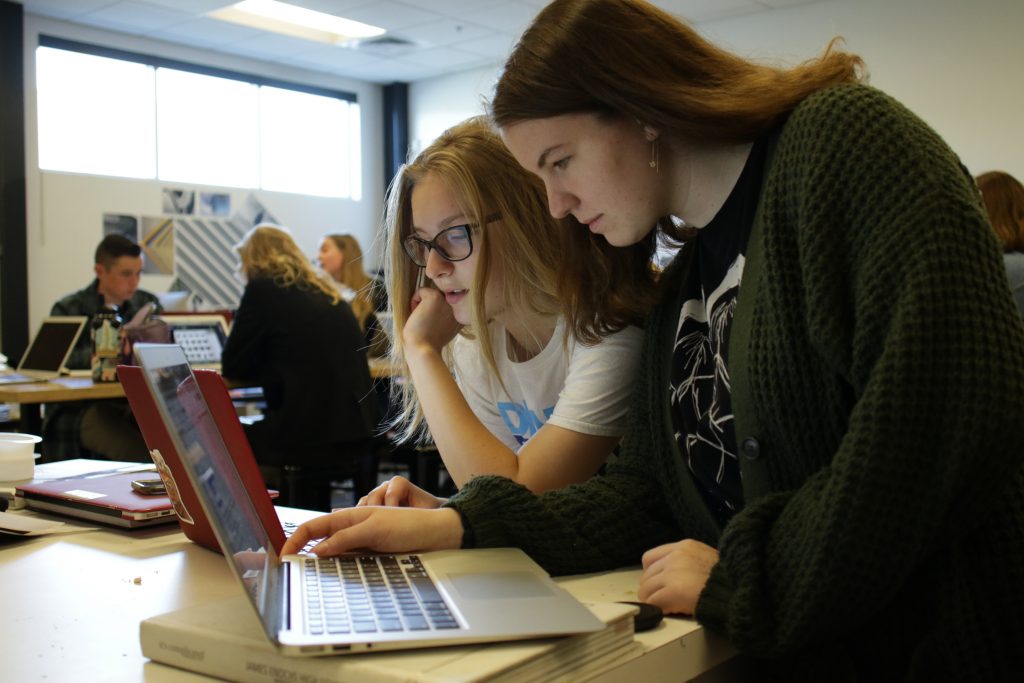 Senior Mikaila Barker and junior Amber Bacardi, The Chronicle editors-in-chief, write a follow-up to “Invisible Wounds,” a new story that will be published in the staff’s 2019 yearbook. While “Invisible Wounds” was centered around shedding light on the glaring issue that was mental health on campus, the follow-up story is aiming to address how students can get help and help one another. Photo by Cara Brinkman

The Journalism Education Association and Quill and Scroll International Honorary Society for High School Journalists have named The Chronicle staff at Classical Academy High School in Escondido, California, as winner of the 2019 Student Journalist Impact Award.

After the death of one of their classmates, the staff of The Chronicle knew it needed to do something to help the school and community learn more about mental health and the impact on their generation.

What followed was an in-depth look driven by information collected in 370 student survey responses, which accounts for almost half of their student body. “Invisible Wounds,” a full-page spread, presented information that the school and community not only listened to, but used as a driving force to take action and make change.

“The changes started small, with suicide hotline posters hanging on bathroom stalls and lining every hallway,” the staff said. “Then we saw an increase in both the administration and teachers encouraging students struggling with their mental health to go talk to our social-emotional counselor.”

While those changes were initially small, the community continued to make adjustments.

“After the staff’s diligent journalistic work uncovered the need for on-campus discussion and education about mental health, our next step was integrating those needs into the existing schedule,” Principal Dana Moen said. “In past years, homeroom was a time set aside every Tuesday for announcements and turning in quarterly assignments. However, because of the information acquired through the survey, homeroom is now a program that alternates between in-class discussions and assembly-type presentations held by the lead counselor. Featured subjects during these weekly meetings include stress management, depression, anxiety, and healthy relationships.”

The staff of The Chronicle is the 21st recipient of this award. The JEA Student Journalism Impact Award was created in 1993 to recognize a secondary school student or team of students who, through the study and practice of journalism, have made a significant difference in their own lives, the lives of others, the school they attend and/or the community in which they reside. The Impact Award recognizes student writing that brings issues to the forefront and from the walls of the high school to the world at large.

This is the first year JEA and Quill and Scroll have teamed up to judge entries and present the award.

The award will be presented April 25 at the opening ceremony of the JEA/NSPA Spring National High School Journalism Convention in Anaheim, California.

Quill and Scroll, founded in 1926, encourages, supports and recognizes individual student initiative and achievement in scholastic journalism, regardless the medium. It is headquartered at the University of Iowa, Iowa City, Iowa.