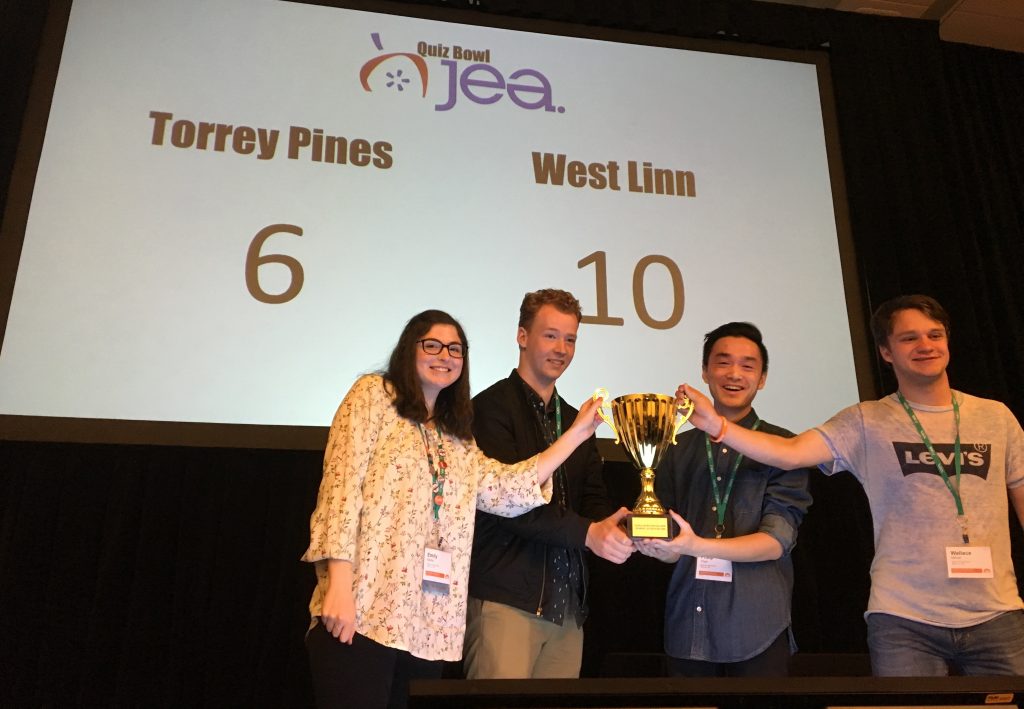 The team isn’t new to the JEA Quiz Bowl. Both Martin and Chan were on the West Linn team in April 2017 when they lost to the Seattle 2017 champions Torrey Pines High School from San Diego in round two. In fact, adviser Glenn Krake, CJE, said it’s what drove them to bring home the trophy this April, breaking Torrey Pines’ two-year spring winning streak and leaving the California team four points short of the win.

To determine the initial seeding of the 25 registered teams, teams of four students took a test April 13. The next day, the top 16 qualifying teams met for four rapid-fire buzzer rounds, answering questions on current events, civics, and journalism law and terminology. The first team to 10 correct answers won each round. Martin helped her team to the No. 1 seed during the test that Friday, but didn’t get to participate in the Saturday competition because she had earned the honor of Oregon Journalist of the Year and chose to participate in an event related to that.

Competing Quiz Bowl teams came from Arizona, California, Colorado, Indiana, Kentucky, North Dakota, Missouri and the Republic of China (Taipei American School). While it often ends up that no more than one team from any state competes in the Bowl, there were 14 teams from California in the San Francisco Quiz Bowl. In fact, three of Sacramento Country Day School’s five teams made it to the buzzer rounds, and the West Linn team got to compete against all three before beating the No. 2 seed Torrey Pines 10-6 in the final round.

Though Krake said he didn’t want to say the cliché “I’m really proud of them,” he then said he was genuinely proud of his students.

“It’s super important to stay on top of current events and journalism terms, and the like. Staying aware of current events and understanding media will help you in your profession even if you don’t go on to be a professional journalist,” Martin said of her reason for competing in the Quiz Bowl. That, and she and Callaghan wanted to go out with a win their senior year. In fact, it’s been a banner year for West Linn, also bringing home six individual awards and placing fourth in Best of Show for a tabloid newspaper (16 pages or fewer). 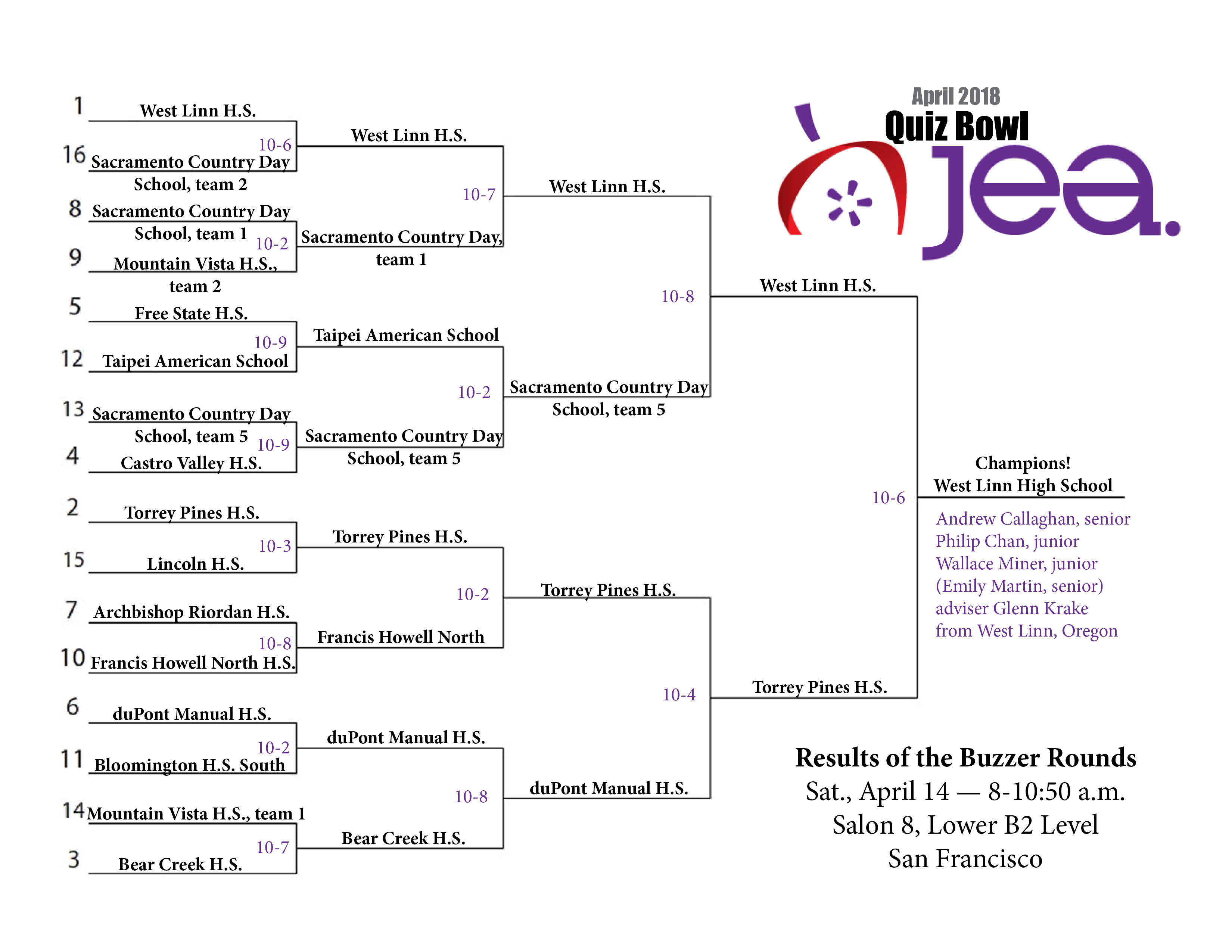 Runner-up Torrey Pines, came into the buzzer rounds as the No. 2 seed. The school fielded championship teams in the spring of 2017 and 2016. The team included seniors Anvitha Soordelu, Sumin Huang, Sammy Hallal and junior Eve Gross-Sable, all representing the student newspaper, The Falconer. Mia Boardman Smith advises the newspaper, yearbook and literary magazine. Opinion editor Hallal and co-editor-in-chief Soordelu were on the winning team a year ago in Seattle, while co-editor-in-chief Sumin and copy editor Gross-Sable rounded out the team of legacy and new team members this April.

“I was a lot less nervous (this time) than I was before, like I wasn’t shaking,” Hallal said, adding that because it wasn’t his first time competing, he felt more prepared and comfortable competing.

They may not have taken home the championship trophy, but they dominated the first three rounds with clear wins at 10-3 against 15th seed Lincoln High School (Portland, Oregon) in round one, 10-2 against 10th seed Francis Howell North High School (St. Charles, Missouri) in round two, and 10-4 against sixth seed duPont Manual High School (Louisville, Kentucky) in round three.

The next quiz bowl will be in November during the JEA/NSPA Fall National High School Journalism Convention in Chicago.