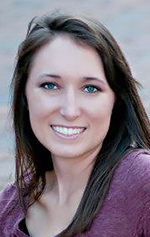 The scholarship is given to current scholastic media advisers who intend to earn a secondary administrator’s credential/license and seek a position in administration.

Carlson, who has been advising award-winning publications for the last three years, has also been instrumental in initiating student leader presentations at Florida Scholastic Press Association conferences as another way to empower students and share their expertise with other students.

Through her time as a student journalist and as an adviser, Carlson formed a belief that “students have the right — and responsibility — to determine which content is necessary and useful to their audience. They also have a responsibility to produce content that is balanced and professional, that reflects viewpoints rather than pushing them.”

As a future administrator, Carlson aims to serve as a knowledgeable support system for publication staffs and advisers, something she has observed and experienced in her current school’s administrative team.

“I can see why administration would like to know what is being published; if something controversial is going to run, they like to be prepared to respond to any inquiries,” she said. “Our administration is a good example of this and has shown me that, even if they may prefer a topic not run, they are willing to let students have a voice.”

Carlson, who comes from a family of educators and administrators has a unique lens into the significance of scholastic journalism.

“I was able to advise my alma mater’s publication when the previous adviser — my adviser — retired. Now, I have seen the power of scholastic journalism from both sides,” she said. “Now, I have seen how immensely leadership matters both inside and outside of school. Now, I have a purpose: to progress to the administrative level of high school.”

Carlson is pursuing a doctoral degree in educational leadership at the University of Central Florida.