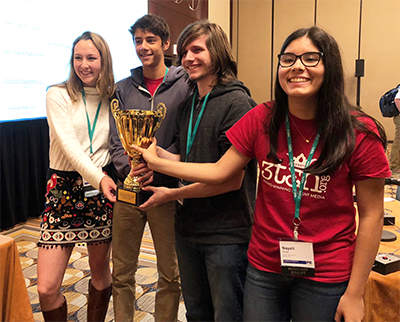 Decatur High School Quiz Bowl champions (from left) senior Molly Weston, junior Maxime Tirouvanziam, senior Jack Brock and sophomore Nayeli Shad. Brock is the only member of the team who had previously competed in a JEA Quiz Bowl. The team rode their No. 1 ranking all the way through the competition, taking the Quiz Bowl trophy and bragging rights back to Decatur, Georgia. Photo by Leo A. Mercer

Students on the winning team represented the convergence journalism program at their school, and each brought their expertise to the competition. Weston is editor-in-chief of the magazine Carpe Diem. Tirouvanziam is sports editor and Shad is copy editor for both the magazine and their website 3ten.org. Brock is the broadcast managing editor of The Dec and also competed in the JEA Quiz Bowl on a Decatur team a year ago in Indianapolis. Unlike Brock, this was adviser Ben Skillman’s first time attending a JEA/NSPA convention. He has been teaching for 15 years but is in his first year advising convergence journalism.

Weston said that her team didn’t prep much for the competition, but then Skillman chimed in that Weston had learned much of the civics information in her AP studies at the school, and his students had learned journalism terminology and history at the school as well.

“It’s important to note that even if I stay out of the way, that what we do day to day is good enough for students to be successful,” Skillman said. “We don’t teach to the test – or the Quiz Bowl – but of course exposing our students to this information is important.”

Despite the team’s modesty around studying themselves, they do suggest that future competing teams, “Study the court case history,” Tirouvanziam said. “And look at headlines before the competition,” Weston added.

To determine the initial seeding of the 31 registered teams, teams of four students took a test Nov. 17. The next day, the top 16 qualifying teams met for four rapid-fire buzzer rounds, answering questions about current events, journalism law and terminology, and civics. The first team to 10 correct answers won each round. 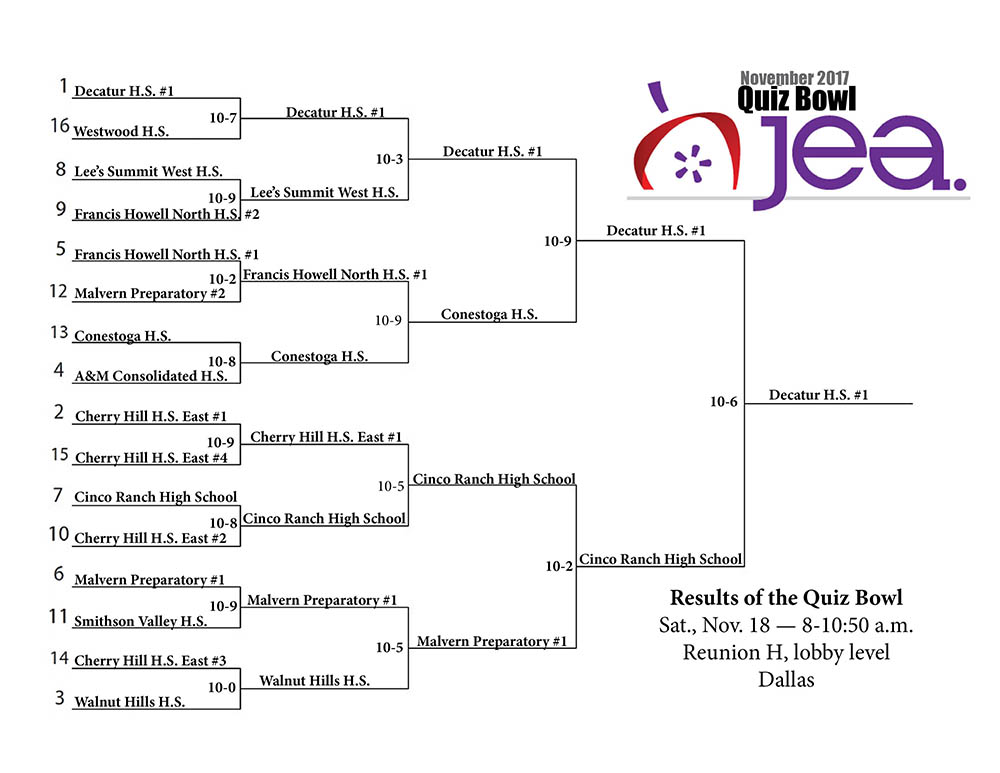 Based on the test the day before, Decatur came in as the No. 1 seed going into the Quiz Bowl buzzer rounds, ultimately beating the No. 7 seed from Cinco Ranch High School in Katy, Texas, in the final round.

This was also the second time for Cinco Ranch to field a JEA Quiz Bowl team. They redeemed their round two loss of 10-6 against Malvern Prep in April 2017, by beating Malvern Prep in round two 10-2 this fall in Dallas, making it all the way to the final round against Decatur High School.

“I remember watching my friends compete in last year’s quiz bowl at the Seattle convention. I found it very interesting and exciting, so it influenced me to sign up to be on the quiz bowl team for the Dallas convention. Initially, I wasn’t totally nervous,” Cinco Ranch senior Angelica Arinze said, “but as we progressed through the tournament and we consistently won, I started getting more nervous because it became more high stakes and every answer meant a lot. Though we didn’t end up winning, I was incredibly grateful for signing up to compete because it was a great way to not only survey our journalistic knowledge, but also learn things that I had no idea about.”

The runner-up team from Cinco Ranch consisted of staffers for the County Line magazine and website, all seniors: Arinze, Brynne Herzfeld, Samuel Teas and Ana Medina. County Line adviser Ed Larsen said he is proud of his students success as runner-up.

“Our students had a blast, and our run to the finals was thrilling. This is only our second year to compete in J-Quiz Bowl, so I am incredibly proud of what the students accomplished in Dallas,” Larsen said. The 30 participating teams came from California, Georgia, Kentucky, Michigan, Missouri, New Jersey, Ohio, Pennsylvania, Philadelphia and Texas.

“I’ve never experienced intensity like that before, and the experience was exhilarating. When we lost in the final round, I was honestly relieved regardless of the outcome,” Teas said.

The next JEA/NSPA National Journalism Quiz Bowl will be in San Francisco, April 12-15, 2018. Online registration opens in January.