The Journalism Education Association has named Joseph Lister of West Chester, Pennsylvania, the 2017 Aspiring Young Journalist Award honoree. JEA presents this award to junior high/middle school students to acknowledge and reward their work, and to encourage them to continue their journalistic studies in high school.

Bryn Valdez of Parker, Colorado, was selected as runner-up. 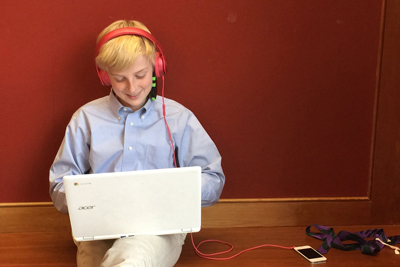 Joseph served as a reporter for The Blackfriar Chronicle newspaper at Malvern (Pennsylvania) Preparatory School for all three years of middle school. While this publication served the high school grade levels of his school, he was the only middle school student who kept showing up for staff meetings, eager to take on reporting assignments.

Taking what he learned from working with The Chronicle, he served for two years as editor-in-chief for Malvern in the Middle. Because the school did not have a journalism program at the middle school level, Joseph took it upon himself to launch one last year, piloting a print and online publication. He found a faculty member to advise, recruited other middle school students to be editors and reporters and applied his experience.

His adviser, Kate Plows, CJE, wrote: “His upperclassmen peers are cheering him on as he works to create a sustainable program for the lower grades, and we are looking forward to exploring how our publication might support more middle school reporters in the future.”

Joseph’s school has been in a constant state of flux with initiatives and pilot programs for learning, and he took notice. He used this as a catalyst for story angles, using the new publication as a mouthpiece to inform the community. According to his adviser, he gained the trust of administrators who will speak to him on record about these changes and school climate issues.

“I can’t stress enough how much courage and independence it took for a sixth grader to show up, and quickly begin contributing to his high school newspaper,” Plows wrote. “Every time I doubted whether Joe could handle the workload or sophistication of contributing to a high school level publication, he had another story in drafts that proved me wrong. Joe has double-bylines with high school seniors, and the older students consistently put his name first for his contributions.”
In addition to garnering respect from the upperclassmen, Plows thinks Joseph will be the first-ever freshman section editor for their high school newspaper next year.

Judge Kristi Rathbun, CJE, wrote of Joseph, “His work demonstrated the spirit of the award with the initiative he took to be a part of his school community’s media program. He demonstrates strong reporting and a willingness to embrace multiple elements of student media — online, social, print.”

Bryn Valdez served for two years on the Eagle Eye View yearbook at Sierra Middle School, first as a copy and design editor, then as editor-in-chief.
Her adviser, Jed Palmer, CJE, wrote: “Bryn has proven to be a strong leader as one of our editors-in-chief this year. She is a firm presence in our staff room and the students respond well to her. She also has a very strong work ethic, and she volunteers her time after school, weekends and breaks without me asking. She frequently catches detailed corrections I may miss, and she has managed to bring that same focus and attention to the writing in our book, helping other student writers as we develop a consistent voice within the copy.”

The awards were presented April 9 at the JEA/NSPA Spring National High School Journalism Convention in Seattle.