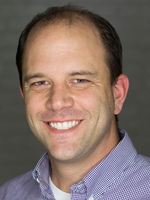 Glasscock has an extensive history with both JEA and Kansas State University. Graduating in 2004 with a degree in print journalism, he said he was first introduced to JEA in college when he traveled to conventions as part of a student-support team for the executive director and headquarters staff.

“Working and teaching at the JEA conventions during my college days influenced me to become a teacher,” Glasscock said. “That experience is 100 percent responsible for my becoming an educator.”

And it was the JEA Listserv that led him to his first teaching position.

“I saw on the Listserv an adviser looking for someone to teach photography,” he said. “I applied and taught at Andover (Kansas) High School for three years.”

In August 2010 he accepted a teaching position at Derby (Kansas) High School, where he advised both the yearbook and the newspaper, and in 2014 he returned to Kansas State as associate director of Collegian Media Group, where he advised the Royal Purple yearbook and Manhappenin’ magazine and managed a student staff of IT support technicians and one web developer.

Glasscock enhances his teaching experience with his passion for photography. His first job after graduating from K-State was as a staff photographer for the Jackson Hole (Wyoming) News and Guide. He continues to work as a freelance photographer providing images for The Wichita Eagle, Powercat Illustrated, The Associated Press, Getty Images and Wichita State University.

Glasscock said he intends to draw on all of his experiences as instructor and executive director.

“My reticulated path to this position is one I am both proud of and will draw from to best serve our members and guide the corporation to achieve its mission,” he said. “Though I have a journalism grounding through my higher education degree and work experience in newsrooms, my time spent as a scholastic journalism educator and adviser gave me first-hand knowledge of the struggles and battles our association members wage daily.”

Jean Folkerts, interim director of the A.Q. Miller School, said Glasscock is a welcome addition to the school.

“We are delighted to have Kelly Glasscock join the A.Q. Miller School of Journalism and Mass Communications faculty and to provide a direct connection between the School and JEA,” Folkerts said. “Kelly truly understands the need for students and the public to recognize the importance of credible information in a democratic society. He will help the School and its faculty recognize how high school students can contribute to our understanding of how to provide an excellent advanced education as students move into the college setting.”

Glasscock will officially begin his executive director and instructor duties on Aug. 1, 2017, but will be visible April 6-9 at the JEA/NSPA Spring National High School Journalism Convention in Seattle and at the JEA Advisers Institute in July. He also will be working closely with Interim Executive Director Linda S. Puntney to ensure a smooth transition.

JEA President Mark Newton said he was impressed with Glasscock’s breadth of experience in scholastic media. “As a former high school journalism teacher and media adviser, Kelly will bring a deep background of perspectives to this position,” Newton said. “Every single member of the committee was impressed with Kelly’s background and skill-set, as well as his demeanor and vision.”

The decision to hire Glasscock was unanimous.

“The committee was quite inspired by Kelly and so was our headquarters staff and all of the K-State officials,” Newton said. “We’re all excited for Kelly to become the next leader of our organization.”

Former executive director Kelly Furnas wrote in a letter of recommendation that Glassock is the consummate professional. “He is smart,” Furnas wrote. “Smart about journalism and smart about business.”