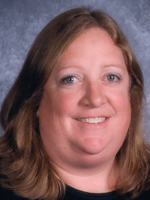 What started as a routine Monday morning staff meeting turned into a surprise announcement for Nancy Y. Smith, MJE. The adviser from Lafayette High School in Wildwood, Missouri, was named the 2016 H. L. Hall National Yearbook Adviser of the Year by the Journalism Education Association.

Smith will be honored at the April 8 awards luncheon during the 2017 JEA/NSPA Spring National High School Journalism Convention in Seattle.

Smith has advised the yearbook staff for 22 years at Lafayette High School, advising the newspaper staff for one additional year.

In the past year, Smith has been awarded JEA’s Medal of Merit and the National Scholastic Press Association’s Pioneer Award. In 2014, Dow Jones News Fund named her a Distinguished Newspaper Adviser.

“In the four years I’ve known Mrs. Smith, I’ve come to respect her more each day,” wrote senior Nick Horstmann, who is yearbook editor-in-chief and newspaper cover editor. “Whether her interactions with students or her motherly compassion, she has the full trust of her students and helps each of us reach our full potential.”

Her service to the profession started with a focus on the St. Louis area in 1993 and since 2010, she has been JEA’s Contest Committee chair. Her primary job, though hardly her only one, is to coordinate the Write-off competition at national conventions. Smith has overseen a shift to a digital format that has modernized the program and made it more efficient.

When Smith joined the Lafayette faculty, she was charged with building a journalism program. She started with a single period with 13 newspaper students. Now she advises four publications (yearbook newspaper, online news, digital media) and teaches two introductory classes as a full-time journalism teacher. In 2010 journalism moved into its own dedicated classroom.

“Nancy Smith not only represents all that is good about being an adviser, she also will represent with integrity, knowledge, humor and passion for all of us in the classroom and JEA,” Jim McGonnell, a former Dow Jones News Fund Adviser of the Year wrote. 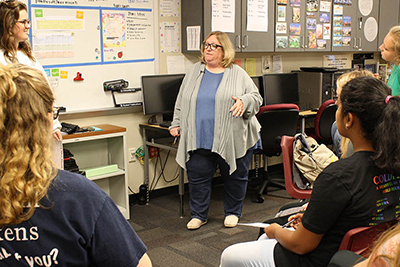 In the award application, Smith calls herself a scholastic journalism “lifer.”

“What other career would give me the chance to guide students as they produce the official record of the school year, a fun and interesting memory book and a great example of the best of their journalistic skills in photography, design and writing?” she wrote. “Where else could I manage a huge budget that relies on the trust and confidence of the student body? In what other classroom do teachers help a student learn how to make other students feel better about themselves or to smooth the ruffled feathers of a secretary?”

Smith was chosen by a panel of five veteran scholastic journalism leaders including 2016 recipient Renee Burke, MJE, of Boone High School in Orlando, Florida, who presented the award at the staff meeting. The award is sponsored by Balfour, Herff Jones, Jostens and Walsworth yearbook companies.