The Journalism Education Association has named Benjamin Rascon Gracia of Westfield, Indiana, the 2016 Aspiring Young Journalist Award honoree. JEA presents this award to junior high/middle school students to acknowledge and reward their work, and to encourage them to continue their journalistic studies in high school. 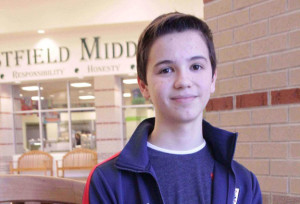 Madeline Bogard of Missouri City, Texas, was selected as runner-up.

Rascon Gracia served two years on The Scrapbook yearbook staff at Westfield (Indiana) Middle School, serving as assistant copy editor in 2014-2015 and copy and accuracy editor in 2015-2016. His adviser, Allie Staub, wrote, “Benjamin understands and recognizes the great responsibility that he and his fellow staffers had to uphold the journalistic integrity that’s required when producing a yearbook.”

Rascon Gracia also was named 2016 editor-in-chief, which is given as an award at the end of the year, rather than a position named at the beginning.

“He goes into each yearbook spread to make sure all students are identified properly and that names are spelled correctly,” Staub wrote. “I am able to not only trust Benjamin with important, sensitive information, but to trust in him knowing that he would do the work with it the same way I would, if not better and more efficiently than I could.”

Rascon Gracia has written a post for the Walsworth Yearbooks blog, “You can write a story even when you’re stumped.” Also, a yearbook spread he took photos and wrote copy for was featured in the Walsworth Online Theme Gallery in 2015.

“I think Benjamin had an excellent command of design and journalistic writing, as well as photography,” said judge Renee Burke, MJE, of William R. Boone High School, Orlando, Florida. “His writing was superior to all the contestants; his rationale for choosing his pieces was detailed.”

Madeline Bogard served as a news editor for The Spirit” yearbook and the SJPII Times Online newspaper in 2014-2015 at St. John Paul II Catholic School in Houston, Texas. She served as editor-in-chief of video production for the journalism program in 2015-2016, where she helped launch a new broadcast news program at the school, “Halo News,” a weekly newsmagazine program.

Her adviser, Beverly Kimmitt, wrote, “As editor-in-chief of video production, Madeline was an initial anchor of our broadcasts. Her calmness and camera presence has provided an example to the other students as we embarked on our initial broadcasts. Her leadership has helped the class achieve a higher level of creativity in working on the yearbook and news stories for our online newspaper. She is truly a well-rounded journalist able to achieve in both print, online and video journalism formats.”