JEA names Turner its Broadcast Adviser of the Year

JEA names Turner its Broadcast Adviser of the Year

In a surprise presentation at her school, the Journalism Education Association named Michelle Turner of Washington (Missouri) High School the 2016 National Broadcast Adviser of the Year. 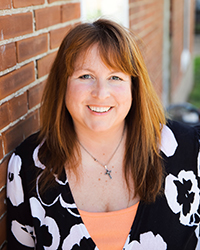 Turner will be officially recognized at an awards luncheon April 16, 2016, at the JEA/NSPA Spring National High School Journalism Convention in Los Angeles. Gil Garcia of Stephen F. Austin High School in Austin, Texas, was named a Distinguished Adviser and also will be honored.

The Broadcast Adviser of the Year program is designed to honor outstanding high school advisers and their exemplary work from the past year and throughout their career, including service as members of JEA and to the profession.

The Roy H. Park School of Communications at Ithaca College is the sponsor for this award.

“A teacher, sounding board and constant cheerleader for her students, Ms. Turner has made it her career and her passion to introduce hundreds of kids to the joys of a journalism education,” wrote Washington High School alumna Emily Rau, anchor and reporter at KMOV-TV in St. Louis.

Turner teaches and advises the Blue Jay Journal TV, the advanced broadcast course, in addition to several photography classes. In the past, she also advised the yearbook staff.

Turner is the Missouri Interscholastic Press Association 2015 Missouri Journalism Adviser of the Year. She also was honored as a co-winner of the Taft Award in 2015 by MIPA for her dedication to improve the state journalism association that was founded in 1923. In 2014, she was named a Special Recognition Adviser by JEA in the National Broadcast Adviser of the Year program.

“We work to become that television show that the local mayor trusts when our students call for an interview,” Turner wrote of her student’s program. “We strive to teach our students to tell stories that are fair and accurate, yet with compassion so that when a grieving parent wants to tell their story so no other child is lost to drug abuse, she doesn’t see our students as teenagers with a camera, but budding young professional reporters with a heart. We have to be willing to honestly report the losing sporting seasons within our schools, and not just the winning moments.”

Distinguished Adviser Gil Garcia is in his ninth year teaching and advising at Austin High School. In that time he built the broadcast program from nonexistent to a four-year sequence and among the most-sought electives on campus.

His students have won numerous local, regional, state and national awards and earned a visit to the White House in one competition.

The Journalism Education Association is the largest scholastic journalism organization for teachers and media advisers. It is headquartered at Kansas State University, Manhattan, Kansas.