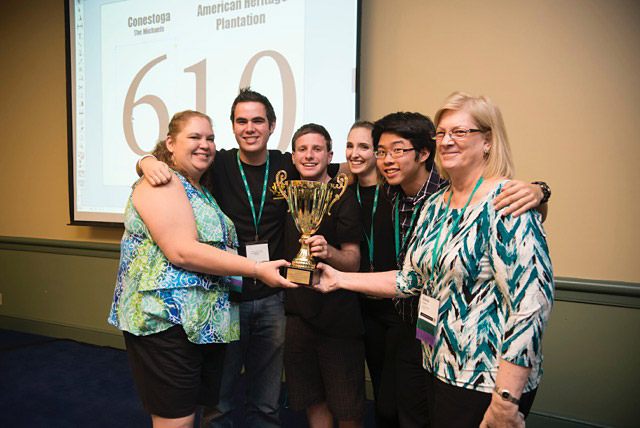 Students on the winning team represented several publications, and each brought his or her expertise to the competition. Turner is the editor-in-chief of both The Patriot Post newspaper and the Expressions literary magazine. Krimsky, who was celebrating his birthday the day of the competition, is sports editor for the Patriot Post. Chou is editor-in-chief of the online newspaper iPatriotPost, and King is co-executive producer of the student broadcast program, WAHS Broadcast.

“My kids and I all loved it, and we still would have even if we had lost. It was fun,” Adams said. “I know my kids in the audience are going to pay more attention to AP style because of it.”

The first team to 10 correct answers won each round. AHSP started the buzzer rounds as the No. 2 seed, beating out the No. 15-ranked Kingwood (Texas) Park High School team, 10-8; the No. 7-ranked Cherry Hill (New Jersey) East High team, 10-6; and the No. 11-ranked Scotch Plains (New Jersey) Fanwood High School, 10-7, before taking on Conestoga High School from Berwyn, Pennsylvania, in the final round. AHSP students won 10-6 against CHS, which had two teams of students going into the buzzer rounds seeded at No. 1 and No. 5.

“Just the fact that we won made me incredibly proud and excited as the team exceeded my initial expectations,” Krimsky said. “The fact that we won on my birthday just made it that much sweeter and was another gift from my friends on the newspaper staff.”