Because all good storytelling starts with the curiosity to ask questions, JEA is excited to announce the New York Times best-selling title “A Curious Mind” by Brian Grazer and Charles Fishman as the Fall 2015 One Book. 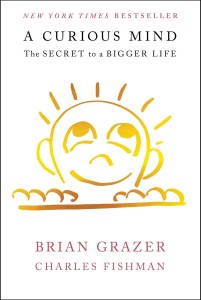 “A Curious Mind” by Brian Grazer and Charles Fishman

Co-authored by Academy-Award-winning producer Brian Grazer and laudable business journalist Charles Fishman, “A Curious Mind: The Secret to a Bigger Life” takes us behind the scenes of Grazer’s “curiosity conversations” with some of America’s most intriguing personalities. These conversations led to his creation of movies such as “Apollo 13,” “Splash,” “8 Mile” and “A Beautiful Mind” and TV shows including “Friday Night Lights” and “24.”

Grazer’s films and TV shows have been nominated for 43 Academy Awards and 149 Emmys. In 2007, he was named one of Time’s 100 Most Influential People in the World. His co-author, Charles Fishman, is the acclaimed author of “The Walmart Effect” and “The Big Thirst.” He is a three-time winner of the most prestigious prize in business journalism, the Gerald Loeb Award.

For decades, film and TV producer Brian Grazer has scheduled a weekly “curiosity conversation” with an accomplished stranger. From Andy Warhol to Princess Diana or Michael Jackson to Barack Obama, Grazer has met with anyone willing to answer his questions for a few hours.

“A Curious Mind” is Grazer’s exploration of the joys of curiosity and its power to transform our lives. The book discusses the importance of fostering curiosity and the impact of the digital age on seeking answers. This book—and its lessons on the power of curiosity—are eye-opening to say the least.

To help create a sense of community, JEA leaders and members will conduct a series of online chats and discussions in the upcoming months, culminating with an informal book club meeting at the organization’s fall convention Nov. 12-15 in Orlando, Fla.

The JEA Bookstore will offer a special sale on the One Book: $21.50 for nonmembers and $19.35 for members using the bookstore discount code at checkout, plus shipping, at the JEA bookstore at http://store.jea.org/a-curious-mind-the-secret-to-a-bigger-life.html. Members should login to the members-only area jea.org/membersarea/ before ordering to get the discount code.

We hope you follow your own curiosity and join us in reading “A Curious Mind.” Look for additional information coming this summer.