During the past school year, hundreds of high school journalists throughout the country worked hours to complete their portfolios for state Journalist of the Year contests, and the 31 state winners who entered the national competition were recognized April 19 at the closing awards ceremony of the JEA/NSPA Spring National High School Journalism Convention in Denver. 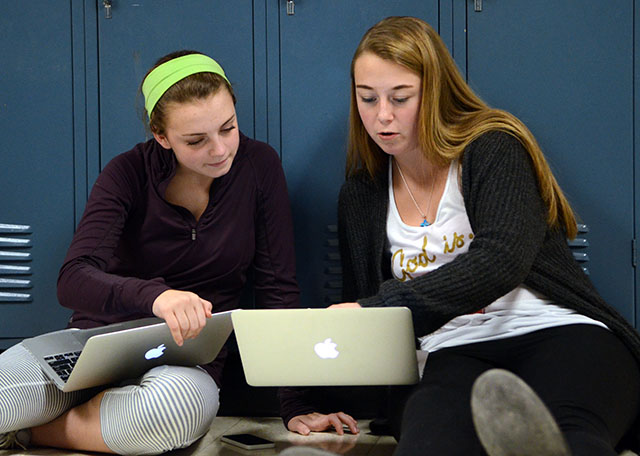 When the final results were announced, Julia Poe of Shawnee Mission East High School in Prairie Village, Kansas, was named the 2015 National High School Journalist of the Year.

Poe will receive a $3,000 Sister Rita Jeanne Abicht Scholarship as part of her recognition from the Journalism Education Association. Her journalism adviser is Dow Tate.

Six other state winners were named national runners-up. Each will receive an $850 Sister Rita Jeanne Scholarship. They are as follows:

Named in honor of JEA’s longtime treasurer, the late Sister Rita Jeanne Abicht, the scholarships recognize some of the top high school journalists in the country. Portfolios are judged in the month leading up to the JEA/NSPA spring national convention, and scholarship funds are paid directly to the recipients in honor of their work on scholastic media.

The national applications this year were all submitted digitally for the first time. The competition attracted dozens of entries in some states and none in others. The 21 members of the scholarship committee were impressed with the depth of experience contained in the state-winning entries. Candidates took the updates of the contest and used technology to their advantage by developing online portfolios.

“Julia is terrific in every way,” said Awards Committee member Jack Kennedy, MJE and executive director of the Colorado High School Press Association. “Her ability to shine among so many outstanding student journalists at Shawnee Mission East is a testament to her talent, personality and work ethic.”

Journalism has led Poe through her high school career. She is a four-year member of The Harbinger online staff, where she has been editor-in-chief her junior and senior years. Reluctant as a freshman, Poe found confidence in her storytelling abilities. Always trying to uncover the unique stories that she felt her community needed to know, she connected with those around her.

“Julia cares deeply for her school and community, and that is greatly reflected in her coverage and content choices,” said committee member Claire Burke, CJE and adviser at Charles E. Smith Jewish Day School, Rockville, Maryland. “I was so moved by the two suicide stories I read — almost to tears — and I can’t imagine many other high school journalists are daring to take on such an ambitious story package. She raises awareness in her community, and I can only imagine that the discussion following the suicide package has or will embolden change. Kudos to Julia for having such an innate sense of what is important in her community.”

Although writing is her forté, she worked to expand her skills, and learned more about photography, video and broadcast. Her desire to know more about sports broadcast led her to commentating during football games and conducting sideline interviews, which gained the respect of the players.

As a leader of her staff, Poe wants to leave a legacy in addition to setting an example. Her adviser, Dow Tate, writes about her leadership: “Julia has a Michael Jordan effect about her. She makes others around her better. She marshaled the forces of more than half the staff to turn out a courageous special section on suicide. She worked through the pressure, doubts and discussions that most high school students falter under before even publishing a single story on the controversial topic.”

About the national runners-up

Andrea Johnson of Arkansas is described by her adviser, Susan Colyer, MJE, as a convergent journalist who possesses the ability to write, film and photograph using whatever technology is available.

“Clearly, the candidate has a passion for journalism that will lead her to collect many more press passes throughout her years in college and beyond,” said judge Lizabeth Walsh, MJE, and adviser at Reno (Nevada) High School.

Jackson Brook of California was a standout to the judges because of his maturity and professionalism with controversial topics.

“The level at which he considers the full scope of the topics he reports on, and the depth with which he is able to cover subjects, is a phenomenal tribute to the power of scholastic journalism,” said judge Colleen Simpson, CJE, of Scituate, Massachusetts, and a JEA state director. “I hope, for the sake of the long term and the future of in-depth reporting, he continues on this path.”

Gabe Rodriguez of Colorado leads a convergent program, with experience in all media.

“The student journalist has a breadth of experiences and knowledge in his career,” said judge Renee Burke, MJE, of Orlando, Florida, and a JEA state director. “It’s amazing at how many student publications he plays a role and does it all well.”

Rodriguez is co-editor-in-chief with Kaitlin Zenoni, who writes about her VISTAj leadership partner, “Across all media, he contributes and demands the best from not only the staff, but from himself. He brings passion to the program that I wish I possessed.”

Daniel Bodden of Missouri is also a 21st century journalist, as he leads and works with multiple media to tell stories.

“Being editor-in-chief is clearly more than just a title to this winner,” said judge Brenda Field, CJE, of Glenview, Illinois, and a JEA state director. “It’s wonderful to see how he has taken ownership of his responsibilities, including that of understanding the wants and needs of his staff and audience.”

Mia Karr of Virginia details for the judges in her self-analytical essay how she will find a way to get to the school when classes are canceled because of bad weather. It is that important to her to make a deadline.

“Karr truly gets it when it comes to being an editor-in-chief — I would love to have her on my staff, and I would have loved to have written for Karr as a staff writer,” said judge Mitch Ziegler, CJE, and adviser at Redondo Union High School, Redondo Beach, California.

Karr’s adviser, Valerie Kibler, CJE, wrote, “What always amazes me about her is the calmness with which she approaches her job. She works beautifully with the younger staff members and takes the time to patiently teach them what they need to do to improve their writing.”

Nicholas Fiorillo of Washington led the charge to update his school’s traditional newspaper to a newsmagazine format. He also implemented the use of 21st century reporting tools of social media and live streaming.

“I was amazed at the breadth of the content of this student’s portfolio. He seemed to have worked as a journalist in every sense of the word,” said judge Judith Murray, MJE, and adviser of Parkview Magnet High School in Little Rock, Arkansas. “His photography was well done, with a shallow depth of field; his broadcasts were well done with clear, defined questions; and he was well prepared and dressed for the interview. The design of the pages was among the best that I have seen.”

The full list of state winners entered in the national competition is as follows: