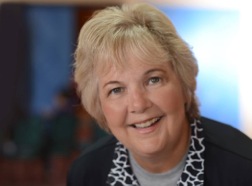 The surprise announcement and award presentation to Sorrows was made in front of the Bryant teaching staff by 2013 recipient Brenda Gorsuch, MJE, of West Henderson High School, Hendersonville, North Carolina.

JEA, the largest national association of scholastic journalism teachers and student media advisers, has presented the award for 20 years, and Sorrows is the 22nd recipient.

Sorrows will be officially recognized April 18 at the JEA/NSPA Spring National High School Journalism Convention in Denver. JEA also will honor five others as Distinguished and Special Recognition yearbook advisers.

A $1,000 award for the winner’s school, and $500 awards for Distinguished Advisers’ schools may be used to buy equipment for the yearbook classroom or to fund student scholarships to summer workshops. The Yearbook Adviser of the Year also will receive a personal $500 prize.

During her 36 years of teaching, Sorrows has advised 30 yearbook staffs and 36 newspaper staffs. In her 24 years at Bryant, she has helped the school’s journalism program grow from virtually nonexistent to having three teachers.

“Ms. Sorrows’ work ethic is second to none,” Bryant Principal Jay Pickering wrote. “She is consistently working after hours to assure her students meet deadlines. It is my opinion that there is a direct relationship between her leadership and the department’s success.”

“Margaret advises, teaches, trains and encourages her students to produce some of the best student media in the country — but she doesn’t do any part of it for them. Hornet is a book students and advisers alike beg to get their hands on (if they are strong enough to lift it!). Students make all of the decisions and do all of the work,” wrote JEA Vice President Sarah Nichols, MJE, of Whitney High School, Rocklin, California.

Sorrows is also a frequent convention presenter and summer workshop instructor. Both she and her students are most noted for their excellence in photography.

Arkansas native and noted scholastic journalism leader C. Bruce Watterson wrote, “Best of all, Sorrows does not suffer from a lack of energy, charm and graciousness, which is undeniably home grown. In workshop settings, late at night, I’ve watched her encircled by students in crowded dorm lobbies. Regardless of the lateness of the hour, regardless of how fatigued she probably felt, she seemed to come alive, filled with enthusiasm for her ring of prospective professional journalists. Passers-by felt the synergy. What an inspiring sight and yet another intrinsic hallmark of her character.”

Named a Distinguished Yearbook Adviser by JEA in 2007, Sorrows is also a former Arkansas Adviser of the Year (1984) and runner-up as the state’s teacher of the year (1999).

“Even to this time in Margaret’s career, when awards for both the publications and for her personally abound, she maintains that sense of humility rooted in doing the right things for the right reasons,” wrote John Cutsinger, CJE, a former Arkansas adviser who now is a creative accounts manager for Jostens. “Whether leading a conference presentation or sitting in one (yes, she is a life-learner who constantly sees her professional growth as an important part of her journey), Margaret is secure in knowing how to live the yearbook good life.”

Sorrows, who holds a master’s degree in journalism from the University of Arkansas-Little Rock, is a JEA Certified Journalism Educator. She is a past president of the Arkansas Scholastic Press Association, and has served on judging boards for state and national organizations.

“By teaching at workshops across the country and serving as a board member of the Arkansas Journalism Advisers Association, her influence doesn’t end. She has reached many more students than the thousands who have been in her program over the years,” wrote Allen Loibner-Waitkus, Arkansas Scholastic Press Association director.