Eight student journalists have been selected to serve as partners for 45words, a student-run journalism organization dedicated to promoting student First Amendment rights. 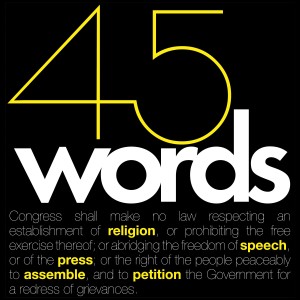 45words is named for the 45 words in the First Amendment, which grants five basic freedoms to all U.S. citizens. This student-run organization’s mission is to support free speech for students, to encourage First Amendment awareness, to connect with student journalists across the country and to help students fight censorship. Created by the Journalism Education Association’s Scholastic Press Rights Committee, 45words has student partners from across the United States representing schools from California, Texas, Missouri, Virginia, Pennsylvania, Indiana and Florida.

These secondary school students were selected from applicants nationwide. Their mission is to promote First Amendment awareness by opening dialogue with other students around the country via social media and at local and national student media conventions. They can be followed on Twitter at http://twitter.com/45words; the Facebook group is 45words.