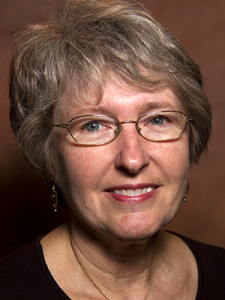 This is JEA’s highest honor and is presented to a JEA member whose work is unusually beneficial and of superior value to the national JEA and to scholastic journalism.

Barrington began her teaching career in 1969 and retired from the high school classroom in 2006. She continues to teach at the college level, most recently at Mount Mary University in Milwaukee.

She began as an English language arts teacher, but soon added journalism and publication advising to her interests, and her combination of successful classroom work and state and national leadership in student media education clearly impressed the JEA Awards Committee.

At the state level, she has been director of the Kettle Moraine Scholastic Press Association’s summer journalism workshops since 2005, and took over as KEMPA director in 2011. At the national level, Barrington co-founded the JEA Mentoring Program in 2007 and continues to serve as the committee co-chair. She served as the JEA liaison to the National Council of Teachers of English from 2004-2011.

Julie Dodd, MJE, one of Barrington’s nominators, praised her accountability as being exemplary, from her record keeping to reports to attention to detail. As Dodd wrote, “Her work is critical to the smooth operation of the program.”

Peggy Gregory, MJE, from Phoenix, Ariz., co-chairs with Barrington on the Mentoring Committee and echoed Dodd’s comment. “Linda is one of those remarkable, well-rounded people who works long hours with no complaints, to make sure every T is crossed and I dotted,” she wrote. “She has affected many students’ lives in her state and nationally through a thriving mentor program.”

A third nominator, Stan Zoller, MJE, and a long-time Illinois adviser, focused on Barrington’s work with KEMPA. He wrote that he struggled to find the right word to describe Barrington – dedicated … passionate … hard-working … — but he settled on the word “mentor,” whether used as a noun or verb, as the best way to sum up Barrington’s contributions.

Zoller worked with Barrington for a decade on the KEMPA board, and he wrote that it has been her vision and excitement that has kept KEMPA’s workshops and other support programs constantly improving.

There was no finer choice for the Towley Award, wrote Zoller, than Barrington. Her civic responsibility, service to the community and dedication to humanity have served as models for him over many years.

Many student media advisers throughout the nation will agree.

The Journalism Education Association Inc., is the only independent national scholastic journalism organization for teachers and media advisers. It is headquartered at Kansas State University, Manhattan, Kan.