Cindy Todd, yearbook adviser at Westlake High School in Austin, Texas, has been named the H. L. Hall National Yearbook Adviser of the Year by the Journalism Education Association. 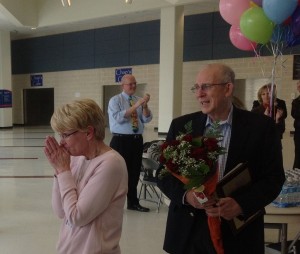 “Although Cindy is admired and revered by her staff,” former Westlake Principal Linda Rawlings said, “her heart is in the classroom, and her legacy lies in her relationship with the kids.”

Besides working for JEA, Todd has also been an active participant in the Texas Association of Journalism Educators. She is a past president of that group, and in 2008 she was the Texas High School Journalism Teacher of the Year.

Her students have high praise for her.

“Mrs. Todd creates an atmosphere and work environment like no other in my 13 years of education,” David Oliver, the current head photographer of the El Paisano, said. “Every day for my four years of high school, yearbook has been the class I look forward to. Her relentless dedication toward her students and the publication is something all teachers (journalistic ones or not) should strive for.”

Todd works with 86 students on yearbook this year in five classes, which include Journalism Yearbook, Yearbook 1, Yearbook 2, Yearbook 3 and Independent Journalism.

“I prefer this arrangement,” Todd said, “because it requires collaboration between rookies and veterans, and it offers older staffers opportunities for mentoring.”

Besides teaching at Westlake, Todd also instructs journalism students across the country. Last summer she taught in 12 workshops in six states. She has also worked with other yearbook staffs in daylong workshops, and she used Skype to help one staff develop its yearbook theme.

Todd said she thinks the word is appropriate for her as an adviser because “year after year, staff after staff, this is how my students make me feel. I am inspired by their creativity, generosity and enthusiasm. I am inspired by the fact that they let me become a part of their busy lives.”

“She is one amazing individual,” current Principal John Carter said, “and I can think of no one as deserving as she.”