Throughout the years, JEA has published a number of resources for instructors regarding coverage of elections — from localizing the national election to student government elections — in its magazine — Communication: Journalism Education Today. Here, you can access some of those resources all in one place. JEA members get the magazine as a benefit of membership. Watch for more coverage in the upcoming issues of C:JET. 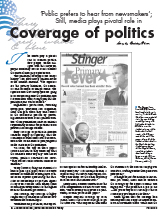 Walking into the White house and asking to shoot the president is typically a ticket to jail. But for Dirck Halstead, nearly every day for roughly the last 30 years has begun just that way, minus the militant intentions.

From John Kennedy to William Clinton, Halstead has held the title of White House photographer, a coveted position only a few photographers have had the honor of holding. Halstead has the privilege of being the first.

I arrived at the fairgrounds the same as I do every year. I did not notice anything unusual about the state fair until I turned the corner by the Bill Riley stage and there they were: CNN, NBC, ABC and CBS. All the national broadcasting trucks and their satellites were parked in front of my eyes. I knew then and there I was in business.

Both my friend Lily and I were avid followers of current events and politics. We both believed that, although not all of us could cast a vote, we should be able to know what our prospective leaders believed. So, even as we were assigning articles for our first issue, it was settled. Issue by issue, we would profile the major candidates in an attempt to educate the students at our school, trying to turn apathy into genuine interest.

CLICK HERE to read the complete stories as part of a PDF file originally published in the fall 2000 issue of Communication: Journalism Education Today. 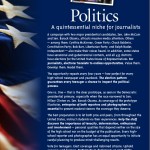 A quintessential niche for journalists
By Howard Spanogle

Develop them. Model them.

Attending the activities surrounding the inauguration of Speaker of the House Nancy Pelosi in January 2007 with teachers and classmates was my first time taking photographs with the professional press. With credentials hanging around our necks, the pros took fellow photographer Rena Hunt and me under their wings in the press area within minutes of joining them, graciously offering to let us try out some of their own lenses on our cameras.

The political beat is a valuable prize on metropolitan newspapers. And in a presidential election year, reporters on that beat work overtime to find stories that do more than simply report the sound bites from the latest staged press event. Veteran reporters Rob Christensen of the Raleigh News & Observer and W. Gardner Selby of the Austin American-Statesman reveal their approaches to the political beat.

The Manheim Township High School newspaper Hi-Lite has been involved in covering the campaigns of U. S. Sens. Hillary Clinton and Barak Obama. Because of the importance of the Pennsylvania primary, both Clinton and Obama held rallies in Lancaster County, where our school is located. My co-editor-in-chief and top photographer entered through the press entrance and received front-row access to the Clinton rally at Millersville University of Pennsylvania.

After receiving press credentials for a Hillary Clinton rally in nearby Scranton, Pa. on March 10, reporter Jeff Shucosky and photographer Jordan Nicholas from Wyoming Valley West High School, Plymouth, Pa. covered the candidate’s speech in the town where her father is buried. There Clinton spoke about her local roots during a rally at Scranton High School.

The bright lights and big stars, ranging from Chelsea Clinton to Martin Luther King, III, surrounded us on every side. I was elbowing the guy from Time to my left and the guy from the New York Times, with his telescopic lens, to my right for a good shot. The three titans — Hillary Clinton, Barack Obama and John Edwards — came out, and the stage lit up with flashes with the sound of shutters making me feel as though I was with an artillery battalion shooting machine guns in Iraq.

The Rise
By Pete Souza

Photographers, like reporters, face challenges when covering politicians, not the least of which is access to the candidates and officeholders or the staged photo-op. “I love photographing politicians,” photographer Jesse Kalisher said. “They are dynamic folks, full of energy. More than that, every nuance has the chance to tell a story. And that’s ideally what I’m after — a gesture, a glance, something which helps tell a broader story of a politician’s life.”

In the 1800s, as photojournalism was beginning to take form, as popular values intersected with patriotism to create a folksy melange, candidates or officeholders were seen in the obligatory scene rife with the symbols of American culture — eating hot dogs, with or near a flag, greeting Indians. … These symbols are meant to reinforce people’s sense that the person pictured is “one of us,” a regular fellow who believes in the things we believe in , in addition to being a patriot whose civic duty calls him from on high.

Big crowds, long lines and a lot of noise were highlights of the scene at Barack Obama’s speech in Tampa, Fla., outside the St. Petersburg Times Forum. It was quite overwhelming for a first-time photographer assigned to capture visuals of a presidential candidate’s speech in his hometown

CLICK HERE to read the complete stories as part of a PDF file originally published in the fall 2008 issue of Communication: Journalism Education Today. Click here to purchase the Fall 2008, Vol. 42, #1 issue of the JEA magazine 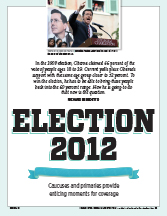 When participating on a panel of political report­ers Feb. 18, Torre Jessup explained he was 198 days away from the official start of the Democratic National Convention in Charlotte, N.C. As the district director of the 2012 Host Committee, Jessup is thinking about engaging the community, the $100 million to $200 million economic impact, the $36.5 million money-raising task and organization of 10,000 volunteers. Also, he mentioned a “small matter” of preparing for 150,000 media participants who will attend the first-day media party at the Charlotte Motor Speedway Sept. 3.

Voices of experience
By Bradley Wilson and Malena Carollo

At the Jan. 24 Institute on Political Journalism at Georgetown University, college newspaper editors and reporters spoke with Richard Benedetto and Jessica Taylor about their analyses of the presidential election and both the House and Senate races.

A photographer’s perspective
By Joel Quinones

Covering Rick Santorum’s visit to Texas was a daunting task because I’ve done nothing like it. With Santorum sweeping the Colorado and Minnesota caucuses and the Missouri primary the night before, I knew there was going to be heavy coverage of his campaign so I was nervous.

CLICK HERE to read the complete stories as part of a PDF file originally published in the summer 2012 issue of Communication: Journalism Education Today. Click here to purchase the Summer 2012, Vol. 45, #4 issue of the JEA magazine

Lessons, printables, and activities on the U.S. electoral process provide great teaching ideas for fall, especially during 2012, an election year. Explore election requirements for the federal government with your students. You’ll also find great ways for students to get involved in local politics, like holding classroom debates or writing letters to representatives. Units on civil rights and women’s history will benefit from resources on the American suffrage movement

Welcome to the Lynn University Presidential Debate Curriculum Web Portal. This website contains activities related to the debate that you can use in your classroom. These activities are intended to go along with and complement whatever you have planned in your classroom and to aid you in teaching students about aspects of the upcoming presidential debates.

Each activity is grade-level specific, most have been tied to Florida’s New Generation Sunshine State Standards, and some are linked to the Common Core Standards which are used by many states as well. This alignment can be found in the matrix contained in the curriculum documents.