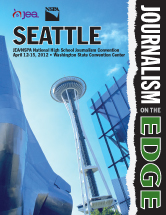 But Sizemore, the editor in chief of MSNBC.com and our Thursday keynote speaker, writes in her foreword to "Journalism Next" that there's a new wrinkle for journalists in the 21st century.

"While you're absorbing these individual lessons, the entire industry will face its own series of defining moments," she writes. "And each increment of that change will create yet more opportunities for you to learn and grow."

Here at the Seattle JEA/NSPA National High School Journalism Convention, we have another name for this defining moment in the journalism industry: We call it the "edge."

It's an exciting place to be. It means that the ground before you hasn't quite settled. It means your path isn't set in stone. And it's wonderfully appropriate to be talking about the edge here in Seattle, geographically located on the northwestern edge of the nation but also on the leading edge of many innovations.

Forty years ago two teachers and a magazine writer started a coffee company at Pike Place Market. Now that company, Starbucks, has 17,000 such stores and has revolutionized the industry. (That original Starbucks is still in operation, but expect a long line if you plan to order a caramel macchiato.)

In the 1970s, a pair of childhood friends with a passion for computer programming made a business from their shared skills. When Bill Gates and Paul Allen founded Microsoft, they launched an industry of software development. (Whether it’s Word or PowerPoint, Windows or Xbox, Microsoft’s edge slices through every aspect of American life.)

Just more than 20 years ago, cutting-edge band Nirvana released the album “Nevermind,” bringing the Seattle sound to the masses and changing the musical landscape forever. (An exhibit featuring rare and unseen artifacts and photography from the band is featured at the EMP Museum, the site of Saturday night’s entertainment hosted by the Washington Journalism Education Association.)

Exciting things happen here on the edge. What exciting idea will you come away with that will revolutionize the journalism industry?

The convention we’ve organized is a map you can use to navigate to the edge without going off a cliff. With keynotes from Sizemore and Dan Savage, hundreds of instructional breakout sessions and workshops, live contests and awards, you’re sure to find the innovation and inspiration you’re looking for.

We’ve brought you here, to the edge. Taking the next step is up to you.