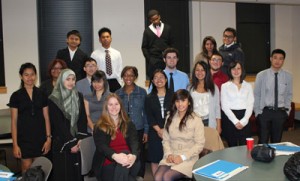 Dressed for success, the Arrow newsmagazine staff from Renton (Wash.) High School, pauses for a group photo before heading into the community to sell advertising in September 2011. JEA has named the Arrow staff its 2012 JEA Diversity Award winner. (Photo by Derek Smith, adviser)

JEA’s Diversity Award honors a scholastic journalism teacher, student media adviser or scholastic journalism group demonstrating a commitment to cultural awareness and encouraging a multicultural approach with its student media staff, media production and/or community. The honoree must be in the forefront in promoting diversity in the scholastic media arena and must have taken steps to break down walls of misunderstanding and ignorance.

The Arrow succeeds where many scholastic news outlets fail: It mirrors the diversity of its student body. As of the 2010 census, Renton has become the most diverse city in the Puget Sound region. Renton High School’s student body reflects that ethnic, racial and religious diversity where 87 languages are spoken within the district. Students are classified as Asian, Pacific Islander, black, Hispanic, white, Native American and Native Alaskan, and many students are biracial or multiracial.

Elizabeth P. Stewart, director of the Renton History Museum and secretary of the Renton Historical Society, said, “Arrow magazine celebrates [their] differences in an unselfconscious way, by dealing head-on with challenges and commonalities. I believe that these students and their work set an example for a community still coming to terms with what it means to be a majority minority city.”

Students used artifacts in the Renton History Museum to chronicle their understanding of the 100 years of history of Renton High School. The student work was added to the larger work “Among Friends: Renton High’s 100 Years,” which “created bridges between generations, between races and between ethnicities by exploring shared experiences,” Stewart said.

Diversity dominates even the academic aspects of this program, which is advised by Derek Smith. Arrow Editor-in-Chief Queenelle Gazmen and Managing Editor Joseph Varnadore, wrote, “Some of us are here for credit recovery – we need to graduate, plain and simple – some because we are crazy, because our Advanced Placement English classes are not enough.” 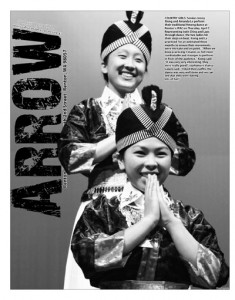 Of the 22 journalists in their newsroom, Gazmen and Varnadore said nine are Asian or Pacific Islander, three are black, four are Hispanic, two are Middle Eastern and four are white.

Arrow is an urban publication for an urban school. When recruiting for new members, the newsmagazine staff looks for people from different walks of life, whose multifaceted and sophisticated stories feed their community with inspiration and ideas.

In an effort to promote student voice and celebrate their diversity, the students distribute the Arrow to 1,200 individuals inside the school community and another 800 to the wider community.

Stephanie Varnadore, Joseph’s mother, is pleased her son can participate in a place where his voice and passion are honored. “I know that the growth I see in him is multiplied in every student, ” she said. “Arrow is empowering this diverse group of students to think deeply about the issues they face and to go out and take on the world.”

For the past 10 years, J Camp’s purpose, mission and outcomes clearly demonstrate diversity outreach and a multicultural approach to student journalism. More than 450 high school students – from 41 states and the District of Columbia – have benefited from its programming.

As AAJA Executive Director Kathy Chow notes, “Each year, students spend six days during the summer under the guidance of a multicultural volunteer staff of veteran journalists.”

J Camp has consistently throughout its history offered “training to talented high school students” and afforded them the opportunity to learn journalism skills.

“J Camp … offered me the chance to really discover diversity within journalism,” said Nourhan Elsayed of St. Petersburg, Fla. “At J Camp, I was surrounded by 30 other aspiring journalists from every cultural background possible. I was able to hear opinions and perspectives I’d never had the opportunity to hear before. I was immersed in a diversity experience that is unparalleled to any other experience I’ve ever had.”