Kim Green, MJE, yearbook adviser at Columbus (Ind.) North High School, learned in a surprise ceremony at her school Jan. 9 that she was the Journalism Education Association’s 2011 Yearbook Adviser of the Year. Kelly Furnas, JEA’s executive director, and H. L. Hall, JEA’s Yearbook Adviser of the Year Committee chair, presented a plaque to Green recognizing her achievements at a faculty meeting after school. 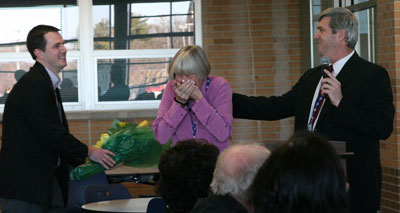 Green’s students often major in journalism in college. Former students have worked for USA Today, the Indianapolis Star, the Baltimore Sun, the Minneapolis Star-Tribune, the Washington Post and ABC Sports.

Besides teaching award-winning publications at Columbus North, Green has also taught workshops around the United States during the summer months. One of her workshops last summer was teaching journalism advisers from other schools at the American Society of News Editors Reynolds Institute at the University of Missouri in Columbia, Mo. She also serves as JEA’s Certification Commission chair.

This is not the first time Green has been recognized for her advising skills. The Dow Jones News Fund named her a Distinguished Adviser, and she is a former journalism teacher of the year in Indiana. 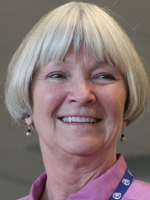 “I work with my students to become good citizens and to help them realize everyone has a story to tell,” Green said. “Their job is to give a voice to the voiceless and to discover that the First Amendment is a living fact of their lives.”

She also said her students have bought into the motto of “Leaving it better than you found it.”

“All of her students take with them a deeply ingrained sense of justice, love of the truth, and an everlasting desire to be better men and women,” David Clark, principal at Columbus North, said in a letter supporting Green’s nomination for Yearbook Adviser of the Year.

A $1,000 award for the winner’s school, and $500 awards to the Distinguished Advisers schools may be used to buy equipment for the yearbook classroom or to fund student scholarships to summer workshop. Green also will receive a personal $1,000 prize.

Winners will be recognized April 14 at the JEA/NSPA Spring National High School Journalism Convention in Seattle.