JEA names past president as recipient of top award

JEA names past president as recipient of top award 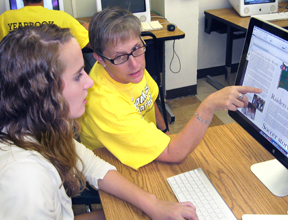 Throughout her 28 years of service at Pella (Iowa) Community High School, former JEA president Ann Visser, MJE, has been a dominant advocate for high-school journalism. From establishing two award-winning publications to embracing the modern-technology generation with a highly regarded website, Visser has made her mark on not only her students but also her community.

“I’ve done four years of hard time with Ms. Visser, and I’ve got to be honest, I haven’t been taught anything,” said Nathan Kooker, a current student and one of four editors for the school’s newspaper, The Pelladium. “Rather, I’ve experienced it all. Ms. Visser fosters a realistic learning environment where, free from textbooks, lectures and routine, I am immersed in the functioning of not a publications class but an actual newspaper. My reporting, design and especially ethics have developed from the real-life trial and error of completing the finished product.”

“After my first year on The Pelladium staff as a sophomore, I debated coming back for my junior year because putting out the newspaper every month was hard and occasionally stressful,” he said.

“The thing with Ms. Visser is she wouldn’t let you get away with just turning something in, as I often tried to do that year. She would push you to do a better job and help you see what you could do a better job on during the next month. She cares so much about making sure her students are doing their best work that she won’t let you not do your best work.”

Oppenhuizen added, “Needless to say, I came back my junior and senior years, and it was one of the best decisions I ever made. I realized how much I liked journalism and decided to major in it in college.”

The ability to balance the responsibility of producing well-respected publications with the presence to establish a feeling of family among her staffers has set Visser ahead of the pack. What separates her from many educators is that she not only gains the respect and admiration of her students, but she also gains lifelong friendships.

“Ms. Visser taught me so much more than I could ever expect out of a high-school journalism class, and a lot of that is because she let us be journalists. It was a real world experience, and we were creating publications that people respected and read on a regular basis,” said Devon O’Brien, a 2008 graduate.

“I don’t think that anyone else could have given me the skills and experience that I have now. I’m always so proud when I can tell people in the newsroom here (at Iowa State University) that I went to Pella High School and Ann Visser was my high school journalism adviser.”

“I can only hope we had a handful of teachers with the same passion and dedication Ann has for her students and publications. She is truly committed to what she does and instills so much pride in her students for what they accomplish. This award is so very well-deserved,” Superintendent Mark Wittmer said.

From the moment Visser joined the faculty at Pella Community High School, she jump-started the journalism department and transformed it into one of the most respected and popular activities for the students. Since 1983, the number of participants in the journalism program has grown so much there are two class periods for each publication, with two sections in each for print and website members and an introductory course to give anyone interested in journalism the opportunity to gain experience before diving head-first into the actual newsroom. With completely computer-generated publications, Visser’s program has kept pace with technological changes since the year Microsoft Word was first released.

“She made journalism seem really fun as it should be,” said Oppenhuizen, a graduate of Iowa State University.