Sarah Nichols, yearbook adviser at Whitney High School in Rocklin, California, has been named Yearbook Adviser of the Year by the national Journalism Education Association. Kelly Furnas, JEA’s executive director, and H. L. Hall. Yearbook Adviser of the Year committee chair honored Nichols in a surprise ceremony at Whitney High, Jan. 19. Nichols will also be honored again at the spring JEA convention in April in Anaheim where she will address her journalism colleagues from across the country. 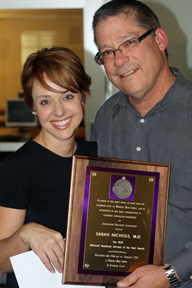 All the books Sarah has advised at Whitney High School have received Pacemaker awards from the National Scholastic Press Association and Gold Crown Awards from the Columbia Scholastic Press Association. Both awards are the highest the organizations give. Sarah has also revised NSPA’s Yearbook Guidebook, and she has been an active member of JEA’s Student Press Rights Commission and its Certification Commission. She has been instrumental in getting students more involved in supporting their First Amendment rights, and she was instrumental in developing the slogan “I’ve Got Mine, Do You Have Yours,” a phrase that has encouraged journalism teachers across the country to be recognized by JEA as certified or master teachers.

She is also a member of JEA’s digital media committee and JEA’s student journalist of the year scholarship committee. She has also served the Journalism Education of Northern California as past president and board member. Before moving to California she taught in Indiana where she served as secretary of the Indiana High School Press Association. She has received NSPA’s Pioneer Award, and was also named a Distinguished Adviser by JEA in 2006.

Sarah has a B.A. degree in journalism from Indiana University and an M. Ed. degree from Indiana Wesleyan University. She has also completed Multimedia 101, 102 and 103 coursework through RTNDF’s Broadcast Journalism project as a way to help her students apply multimedia skills to yearbook.

Casey, her husband, was the national adviser of the year in 2004. Sarah and Casey are the only husband and wife to win this highest honor.