Look at a breaking news story from Rhode Island

For a complete archive of the Providence Journal stories, numerous multimedia presentations and videos, CLICK HERE 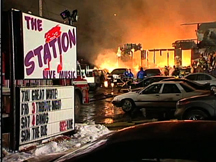 In the years since the fire, the Providence Journal has published literally hundreds of articles on The Station nightclub fire that occurred in 2003. Look at the first few paragraphs of the stories printed right after the fire. Discuss: What criteria of news stories do the first two stories follow? What follow-up stories would you want to write? What sources would you need? Do you anticipate any problems getting the information for your stories? Why/why not? The next two stories take more of a feature approach. How can you tell? Why?

WEST WARWICK – Fire broke out in a crowded nightclub here late last night and dozens of patrons were reported seriously burned or injured.

The fire occurred at The Station at 211 Cowesett Ave. at about 11 p.m. The West Warwick Fire Department requested dozens of rescue squads from neighboring cities and towns, as well as private ambulances to take the injured to area hospitals. Buses were also being sought to take lesser injured people to the hospital.

Casualties were being taken to Rhode Island Hospital and Kent County Memorial Hospital. The extent of injuries was not immediately available last night.

Rescue workers set up a triage area across Cowesett Avenue at the Cowesett Inn restaurant, where the injured patrons were taken for initial treatment and evaluation.

The building was fully engulfed in flames as the injured were being helped from the scene.
A rock concert was advertised in yesterday’s Journal at the nightclub. A band called Great White, featuring Jack Russell and Fathead were the advertised acts.…

WEST WARWICK – A deadly fire ripped through a West Warwick nightclub last night, killing an unknown number of patrons and burning and injuring scores, many critically.

One West Warwick fire official at the scene reported at 1:20 a.m. today that there were multiple fatalities. Bodies “are stacked in there like cordwood,” he said.

Emergency-response crews flocked to the still-burning club from all over the state and nearby Massachusetts, their fire and rescue trucks clogging a long stretch of Cowesett Avenue. In a chaotic and gruesome procession, victims came staggering out of the Cowesett Inn across the road, where rescue workers set up a triage center to evaluate and treat victims; some victims were horribly scorched. Rescuers carried stretchers bearing dozens of badly injured victims.…

After Thursday night’s deadly fire at The Station in West Warwick, bereavement and bewilderment abound among those who bring bands to the public in Rhode Island.

“A fire is bad enough,” says John Chan, owner of Chan’s Fine Oriental Dining in Woonsocket, which includes a night club. “Loss of life of this magnitude is a club owner’s nightmare.”

The club owners aren’t suspending operations, however. So the shows go on.

The four club owners interviewed by The Journal yesterday said they were surprised by what apparently started The Station fire: pyrotechnics. None of the club owners say they permit such things on their premises.

Michael Kent, owner of 10 nightclubs in Rhode Island, including the Strand, the Complex and Deja Vu, reports he permits no combustible materials whatsoever in his clubs.

“We don’t screw around with fire,” Kent says. “People have the right to go to a public place and not have their lives threatened.”…

In the startling video shot by WPRI-TV cameraman Brian Butler, the pyrotechnic tubes ignited by the band Great White gush upward furiously, fountains of brilliant sparks that within seconds merge with the ceiling panels and walls of the doomed Station nightclub.

“Right there!” Victor H. Cipriano’s hand shot forward, index finger targeting a point on the left of the screen, where the energy of the glowing sparks had found new fuel at the angle between wall and ceiling. Probably no one inside the throbbing club realized that the little flicker of fresh fire was the beginning of a terrible end.

“Whatever that covering stuff behind the stage was, it was not flame retardant,” he said. “It looks like that foam board. A lot of such products are petroleum-based. Naturally that’s going to take off. I don’t know what the material was made of, but it’s evident that it was something highly flammable.”…