Linda Drake, journalism and Spanish teacher, at Chase County High School, is the 2008 national Yearbook Adviser of the Year. 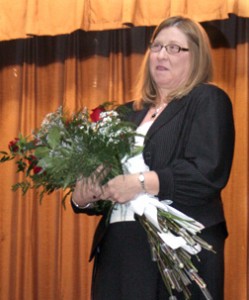 The Journalism Education Association announced Drake’s selection in a special ceremony at her school Jan. 16. H. L. Hall, chair of JEA’s Yearbook Adviser of the Year Selection Committee, and Linda Puntney, JEA’s executive director, presented Drake with a plaque to recognize her achievements.

Drake has advised the yearbook at Chase County in Central Kansas for the past 28 years.

Former students and others lauded her accomplishments in letters submitted as part of her portfolio.

“Many great teachers pour their lives into their students dedicating hours upon hours,” Corrine Patterson, a former student, said. “In Mrs. Drake’s classroom, she’s gotten the 25th hour out of every day in her relentless efforts to help students. I dare anyone to keep pace with her. Her sleepless nights aren’t for her own benefit.”

“I have never known another adviser who was so willing to help new and struggling advisers as Linda,” Patrick said. “She not only contacts new advisers, she mentors them constantly throughout their first years, often traveling across the state to personally meet new teachers. Even for us ‘old’ advisers, Linda is always willing to share handouts, CDs, books and good advice.”

The Chase, the yearbook she advises, has received the All Kansas Award for 14 of the 16 years that award has been presented. It has also received the Pacemaker Award from NSPA.

Drake has also received national recognition in the past. JEA has previously named her a Distinguished Yearbook Adviser, and the Dow Jones Newspaper Fund has recognized her as a Distinguished Newspaper Adviser. In addition, Drake received JEA’s Teacher Inspiration Award in 2007.

Drake will speak to journalism advisers from around the country at JEA’s spring convention in Phoenix.