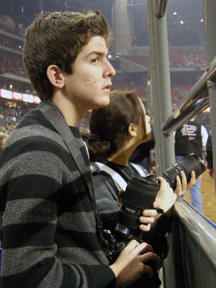 Alex Benito shoots pictures at a Houston-area rodeo. Benito was the sixth Texan to be named JEA’s National High School Journalist of the Year.

It began two years ago. I sat at my desk, cursing the scientific world for its failure to have perfected the human cloning mystery. I desperately wanted, no needed or so I thought, to clone Marcelino Benito, the 2006 National High School Journalist of the Year. Accepting the inevitable, I began a new school year for the first time in four years without his talent, presence and leadership on the publication staffs.

What I did not expect was the impact his younger brother, Alejandro, Alex to his friends and peers, would have the next two years on the journalism department at Cypress Falls High School in Houston. The accumulation of experiences ended in Alex being named the 2008 National High School Journalist of the Year, thus placing his name and Marcelino’s in the history books as the only siblings to have ever won the award, which results in the $5,000 Sister Rita Jeanne Scholarship from the Journalism Education Association.

During Alex’s sophomore year his talents and interests in photojournalism began to appear through staff assignments and on the pages of the newspaper and the yearbook.

“Because of photography I have been able to make my mark as an individual,” Alex said. “Through photography I am finally able to tap into my own talents and skills” – skills he furthered honed as a wire service photographer for EFE News Service. Following in his brother’s footsteps Alex began working for the international service as a novice professional photographer.

“Alejandro wasn’t the first Benito I had an opportunity to work with,” said Fatima Famon, managing director, EFE Photo Service. “I thought Marcelino’s work to be very impressive and couldn’t realistically imagine there could be much better out there, especially from a young high-school student. I’m pleased to admit I was very wrong. It is his personal drive and competitive nature that pushed him forward and allowed him to equal and even surpass Marcelino’s photography skills.”

Alex’s personality shows in his photos. When viewing his photos, one sees the intense serious side of Alex as he captures the pain and the agony on an injured player’s face.

“It’s as if the photos I take come to life with every simple push of the shutter button,” Alex said.

However, his contagious laughter and unique humor clearly surface in his candid and feature shots of students and of friends – “sweet photos” as Alex refers to them.

“His pictures uncannily tell the story of whatever event he happens to be covering,” Famon said. “In his first time covering a professional sporting event, the results were impressive.”

“I enjoy the aspect of being able to tell a story, to stop time, be it for only one second, and capture a moment which lives on forever,” Alex said.

As a senior, Alex accepted the challenge of editor-in-chief for Cypress Falls’ first online newspaper, The Wingspan Online.

“I remember working on the first edition of the inaugural online paper,” Alex said. “The memories consist of late nights on weekdays and even a Saturday morning.”

I had explained to Alex at the concept of the pilot program, he would be the person writing the majority of the stories and doing most of the work.

“An idea I wasn’t too happy with,” Alex said. “I went through with it anyways. Despite the stressful and rigorous schedule, I don’t regret my decision to become editor.”

The online paper was basically a one-man show, “The Alex Benito Show,” with guest appearances by the newspaper and yearbook staff contributing a few stories and photos when needed.

“With the small staff I had available, I was the one who did most of the writing and all of the designing,” Alex said. “The online paper allowed me the opportunity to become a convergent media journalist, in that I wrote my own stories and captions, designed the pages, took photos and even video. My greatest achievement in scholastic journalism has been my transformation from both an inexperienced photographer and columnist to editor-in-chief and professional photographer.”

THE JOY OF TWO BROTHERS

At the April convention in Anaheim, where the award was announced, brothers Alex and Marcelino sat in the back, nervously waiting for those attending the awards ceremony to find seats so it could begin promptly on time, they hoped. Alex, appearing calm and somewhat indifferent to the chaos happening around him. Marcelino, more nervous than when he had been a candidate.

“I sat shaking,” Alex said. “Every time they called a name and it wasn’t me, it was like the next one could be me, maybe? Marcelino, who had been through the process, began to pick up on the clues around him.

“Then I started thinking, it could very well be him,” Marcelino said. “But I didn’t want to get ahead of myself.”

When they announced Alejandro, “I had to turn to him and say, ‘I think that’s you,’ ” Marcelino said.

“They hadn’t even finished his last name,” Marcelino said, “before his butt was out of the chair and running to the front of the auditorium. The photographer didn’t even get a chance to get a good photo.”

Marcelino added, “I was very happy I went to see him win. When I won it, it was just me and Ms. Van Etta. But for my mom to be there, for Alex to have been with his family – receiving the award was something very special to witness. I feel so fortunate to have been able to be there with him on the day he showed up his older brother.”

“I feel having won the title, I will once and for all break free from the shadow of my brother,” Alex said, “and consequently become a journalist along side my brothers and father in the family business of journalism.”

THE STORY OF AN ORIGINAL

“In my mind, Alex was never in my shadow,” Marcelino said. “What’s great about Alex is he has a wonderful amazing, unique personality that’s all his own. He was always in a league of his own. He just needed to believe in himself, in his own talents.”

As for me, no I didn’t get the clone I was searching for. I got something better: an original Alex Benito.

At Cypress Falls High School, which has about 3,500 students and is located in Houston, Alex Benito ended his journalism journey as the first editor-in-chief of the school’s online newspaper, The Wingspan Online.
Previously he compiled a multimedia record:

Alex also won individual awards, such as the following: