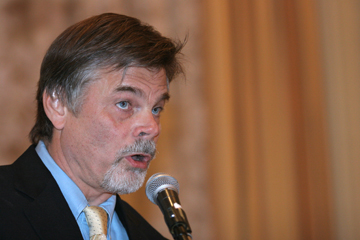 Journalism Education Association honored Bobby Hawthorne, writer and former director of academics for the University Interscholastic League at the University of Texas in Austin, with the Carl Towley Award during the organization’s national convention in November.

Hawthorne’s contributions exceed his reputation as a writer. Calling him “the guru of modern journalistic writing for the nation,” Howard Spanogle, retired high-school journalism teacher, nominated Hawthorne for the award, JEA’s highest honor.

Texans affectionately call him “The godfather of scholastic journalism.” Cheryl Pell, director of the Michigan Interscholastic Press Association, described him as “a legend.”

“When you mention his name in a group of scholastic journalism folks,” Pell wrote, “their eyes light up — and they all start talking about THE BOOK. THE BOOK, of course, is the textbook Bobby wrote in 1994, The Radical Write. It’s been updated and is the book that many folks recommend as a must-have text on the staff shelf.”

Now in its second edition, The Radical Write is an unconventional textbook and the way high-school journalism advisers and teachers know Hawthorne best.

“The Radical Write, a pacesetting book, is regarded as an essential in JEA classrooms,” Spanogle wrote.

Hawthorne most recently completed Longhorn Football: An Illustrated History, published in the fall of 2007 by the University of Texas Press.  Articles by Hawthorne about the danger and the courage of reporters appeared in the fall 2007 edition of the JEA publication, Communication: Journalism Education Today.

Advisers across the country and their students respect Hawthorne for his keynote speeches at state conferences, his learning sessions at national high-school journalism conventions, his classes at summer student journalism workshops and his never-ending networking with Texas advisers.

“He understands the importance of the JEA network in supporting what at times is a tenuous profession,” wrote C. Dow Tate, former Texas publications adviser who is now in Kansas. “His support has been critical to the success of journalism in Texas.”

Hawthorne’s previous awards include the Charles R. O’Malley Award for Excellence in Teaching from Columbia Scholastic Press Association last spring and giving the Honors Lecture at the Association for Education in Journalism and Mass Communication, Scholastic Journalism Division, in August 2005.

“Reporting is always evident in his writing,” Spanogle wrote. “In books, there are articles from the professional press and from the scholastic press. In magazine articles, there are eyewitness accounts of students brainstorming and working on the writing process. His writing incorporates interviews that reflect thoughtful questions and result in insightful answers — as he recommends in JEA writing seminars.”

His long-time involvement with JEA dates back to the mid-1980s and his work with the commission on the Role of Journalism in Secondary Education. Since then, he has led regional workshops, day-long JEA convention seminars and in-school training sessions for JEA members along with his role as JEA’s state director for Texas from 1997 to 1999.

As Hawthorne’s successor at the University Interscholastic League, Jeanne Acton wrote a letter in support of Hawthorne’s nomination for the Towley Award. Acton, who first met Hawthorne when she was a high-school sophomore, said she knew Hawthorne would be influential in her life from their first meeting. He encouraged her to pursue teaching as a career and helped her land her first job…as a Texas journalism teacher.

“But it wasn’t just me he supported,” she wrote. “He supported every journalism teacher in the state. He would drive hours just to do a 45-minute presentation to help a teacher. He would read anything and give you immediate feedback. And on the few occasions when he didn’t know an answer, he would research until he got what we needed.”

Acton taught journalism in Texas for nine years before taking over for Hawthorne when he left the University Interscholastic League in 2005 after being there since 1977.

“During those nine years,” Acton wrote, “my students and I continued to attend Bobby’s workshops. And we continued to learn. He was and still is on the cutting edge of teaching writing. He pushes students to find their voice and their stories. He gets the best out of them.”