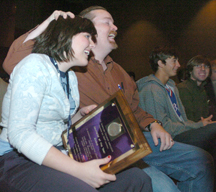 Adviser Dow Tate gives Amanda Allison a hug at the awards ceremony in Denver. Tate was jumping on chairs after the announcement that his student was named the journalist of the year. Photo by Chris Hanewinckel

While hundreds of high school journalists from all across the country worked hours on completing their 36 page portfolios for their state contests, JEA recognized 31 state winners at the awards ceremony at the conclusion of the JEA/NSPA spring convention in Denver. When the final results were announced, six students were named as runners-up and a student from Kansas was the Journalist of the Year. Amanda Allison of Shawnee Mission East High School in Kansas was named as the recipient of a $5,000 scholarship.

Begun to honor JEA’s longtime treasurer, Sister Rita Jeanne Abicht, the scholarships recognize some of the top high school journalists in the country. Portfolios are judged at the spring national JEA/NSPA convention and scholarship funds — $5,000 for the top winner, and $2,000 each for runners-up — are released when a student enrolls in a college journalism program.

The competition this year attracted hundreds of entries in some states and none in others. When the state JOY portfolios were perused by the 14 members of the scholarship committee in Denver, members were impressed with the depth of journalistic writing contained in the entries.

Allison’s entry was the best presented for consideration this year according to the judges. All submission guidelines were followed and student statements on each example helped the judges.

Allison student excels at writing, designing and graphic design and has won awards at every level, and her entry shows the work of a reporter with strong initiative and top-notch leadership on the campus newspaper staff.

In her entry, Allison said, “The journalism program became my home, my family and my life. Because of journalism, I have grown into a meaningful person.” 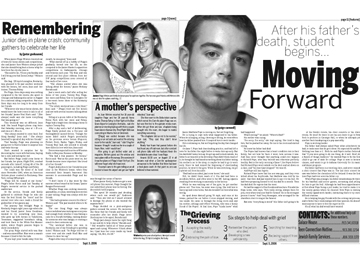 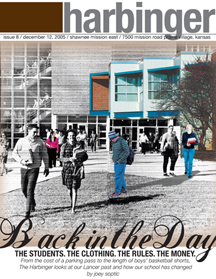 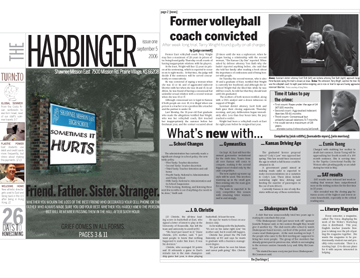 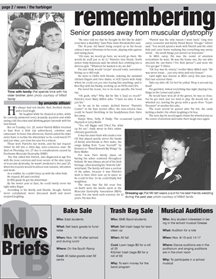 Amanda served as the assistant editor for the “Back in the Day” and “Marked for Improvement” issues. She designed the cover “Sometimes It Hurts” for the issue featuring the volleyball coach, moving forward and the plane crash. She said as editor she edited the stories, making sure all elements of sensitivity were handled correctly.

The story that Allison wrote on remembering the senior who died after battling muscular dystrophy began:

“He always had red cheeks. Red, freckled cheeks and a loud laugh.

“He laughed while he cheated at poker, while he correctly answered every Jeopardy question and while eating cold chocolate and drinking grape Gatorade with his best friend.

“But on Tuesday, Oct. 25, senior Patrick Millett returned to East from a field trip ashen-faced, colorless and exhausted. At home that afternoon, Patrick asked his older sister Katie to recline his wheelchair so he could watch TV and just relax, just close his eyes for a minute.

“Those were Patrick’s last words, his last request before he fell into a three-day, semi-conscious state. He died on Thursday, Oct. 27 due to complications caused by Duchenne Muscular Dystrophy (DMD).”

Impressive describes this entry, according to JOY coordinator Wayna Polk. “This journalist has won the favor of thousands of readers through a devotion to telling other people’s stories.”

According to one of her recommendation letters, this student has the desire and the potential to become a great journalist.

The judges said, “Wow, keep your eyes open as your read this impressive portfolio. And remember this student’s name.” And added, “A student journalist who has won the hearts of readers and the admiration of other professional journalists!”

Polk said, “This student might have had to flee Hurricane Katrina, but she has found a new life in Duncanville. As the Texas Journalist of the Year, she is the youngest reporter to have a story on the front page of the Dallas Morning News.”

“I had no idea what I was getting into I started journalism,” Feldman said of himself in his self-analytical.

Judging coordinator Wayna Polk said, “This portfolio was well done and the significance statements on each submission were excellent.”

Judges said, “Student has strong journalism skills and the work is evidence of a quality high school program.” And added, “This portfolio is commendable in every area.”

Polk said, “Not only were the selections well written, but this portfolio was creative and classy. This student will do his part as a professional journalist since ‘journalism has shaped his beliefs.’”

A student who leaves a permanent mark on a high school newspaper staff is hard to forget and this portfolio was evidence of this student’s love of journalism and the entries were impressive on a high school and community level.

Comments from the judges included:
“Stories captured my attention – you have a knack for drawing the reader into your work.”
“Well designed portfolio – nice design work along with solid, consistent writing.”

Not only was this student a journalist, but also served as a volunteer at an elementary school and in the city’s recreation department.

‘I am insane and journalism is my insane passion,” Lee said in her essay.

The judges had this to say about this entry.
“Your story content is informative an you have a strong sense of design.”
“This entry shows coverage of a variety of issues for school to national news.”

This student journalist is a layout designer, an ads designer, a photographer and a writer.

Covering sensitive issues on campus and emotional family situations for students on their campus, this journalist even completed an interview in the restroom!

Judging coordinator Wayna Polk said, “Every aspect of this entry was superb. From the well-designed dividers to the excellent journalistic examples, this entry was beautiful. This student’s work was inspiring from personal columns about an illness to a detailed feature on cheating at this school, this student has shown a wide variety of writing and reporting experiences in this portfolio.”

The judges said, “The dividers in this entry were the best designed of all the entries.” And added, “This entry shows the integrity of this student journalist……she will be a wonderful professional if her student work is any indication.”

Judging coordinator Wayna Polk said, “This entry included superb examples and this student’s portfolio was neat, clean and easy to judge. The committee members felt this entry was well organized and the assessments by the student proved helpful to the committee. This entry contains a quality assortment of journalistic writing on a school and a community level.