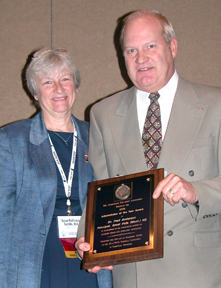 The Journalism Education Association (JEA) honored Fred Anderson, principal of Great Falls (Mont.) High School, with its 2006 Administrator of the Year Award on Nov. 11 during the organization’s national convention in Nashville, Tenn.

JEA’s Administrator of the Year Award is given to a school administrator who has shown a dedication to journalism education.

“Both my students and I owe a great deal to Dr. Anderson,” wrote Linda M. Ballew, journalism teacher at Great Falls High School, in her letter of nomination. “He has given us autonomy. He has supported us financially and emotionally. He is truly a part of our extended family.”

When Anderson arrived four years ago as the fourth new principal in as many years, no one in the building thought he would last, Ballew wrote. But he has – as a true advocate for and supporter of student journalism.

“Dr. Anderson has shown an amazing amount of devotion to scholastic journalism,” Salonen wrote. “His ability to relate to students one-on-one has personalized the publications program at GFHS and created a smooth process for publishing a newspaper, a yearbook or a magazine. As an administrator, he has done a great amount of work to improve the quality of student journalism.”

In the two years before that, he helped Ballew acquire a new Dell computer lab and digital cameras, upgrade InDesign software and purchase a new server when the existing one crashed.

“Dr. Anderson understands the financial difficulty of maintaining a technological program like journalism,” Ballew wrote. “He said he had to do some groveling to find the funds, but it is important to note, he has never made me feel as though I need to grovel for the needs of the department.”

In the summer of 2006 Anderson accompanied Ballew, the 2005 Dow Jones Newspaper Fund National High School Journalism Teacher of the Year, to an adviser workshop at Berkeley in San Francisco.

“Fred has repeatedly demonstrated his commitment and support for young people and school newspapers, standing up for them even against a tide of opposition to their free press rights,” said Marcia Parker, assistant dean of the journalism school at Berkeley.

“He is passionate about the role of the student press and the importance of high school newspapers,” she said. “He is an advocate for bridge-building between journalism advisers and school administrators and actively supports these newspapers and advisers when issues or conflicts arise.”

Anderson recently received the Sams G.V. Erikson Award, given to a member of the School Administrators of Montana who has made the greatest contribution to the betterment of education in Montana. In 2000 he was named the Montana Administrator of the Year. He has worked in education for more than 30 years.

His motto hinges on respect and positive attitude: “It’s the only thing you can control every day, so we might as well look for the best in everything.”

At the national convention in Nashville, Anderson and Ballew collaborated to present a session especially for school administrators and advisers called “Building Bonds Between Administrators and Advisers.”