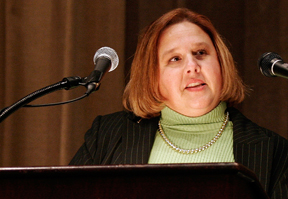 “Ann is the rare person who gains fulfillment through the success of others,” said Pete LeBlanc, yearbook adviser from California who nominated Akers for the award. “All of the long hours she works, the workshops she directs and the awards she nominates others for in the industry are geared to helping students become successful and advisers feel appreciated. Ann’s never been in student publications for herself. She simply wants others to benefit; in her world, that defines personal success.”

Ironically, this fall is the 30th anniversary of Akers’ first JEA convention in Chicago, as a student with her high school publications staff from Iowa. Now, she is back as one of the convention planners via her role at NSPA and as the recipient of JEA’s highest honor.

“There is no one, and I mean no one, who knows more about yearbooks or loves the form more than Ann. She is a true student of the genre and if anyone were to write the history of yearbooks, particularly the history over the last 30 years, it should be Ann,” said Jim Jordan, yearbook adviser at Del Campo High School in Fair Oaks, Calif.

“Ann Akers is the most unselfish individual I have met in any facet of my life,” LeBlanc said. “That unselfishness combined with Ann’s dedication, innovation and technical expertise in the publications field has created an inspirational and motivational force unlike any other in scholastic journalism.”

She moved from Iowa to California to Minnesota and has taught in countless states during summers and at national, regional and state high school journalism conventions.

“When Ann became a representative for Herff Jones in San Jose, Calif., only one book in her area had won a major national award,” said Paul Ender, retired yearbook adviser from California. “When she left the area 10 years later, it was recognized as the hot-bed of yearbook scholastic journalism at the time, and the place everyone looked to for what was happening with cutting-edge yearbooks.”

A Master Journalism Educator, Akers not only shares her innovative ideas with students through teaching convention sessions and summer workshops, she also disseminates these ideas widely through articles for a variety of scholastic journalism publications. In addition, she has updated the guidebooks used by national yearbook critiquing services.

“Every year I like to think I become a little more sensitive to the needs of my students,” LeBlanc said, “and a little less concerned with my own ego. This is the Ann Akers Impact. She’s taught me to put others first – especially the children we teach.”

LeBlanc is not the only one of her colleagues who cites Akers for her selflessness.

“She has helped, contributed, written, edited, brainstormed and supported every endeavor I have undertaken,” Ender said. “Ann has championed me instead of herself. She always makes me look good.”

“She is absolutely amazing in the work she does with students,” Jordan said. “She loves each student and is magically able to bring out the best from each one. She never tells them what to think but helps them find their own best, creative voice.”

“She is, truly, the most generous person I have had the privilege to call friend,” said Kathy Daly, a former yearbook adviser from Colorado. “She pulls people to her, making sure that even rookie advisers feel welcomed and valued. She makes each person feel as if his unique talents truly make a difference – whether as an adviser, an editor, or a childhood friend who accompanies her to New York so she can try out Oprah’s favorite dessert at Serendipity 3.”

“She has touched so many of us,” Ender said. “To me, Ann admirably represents our professional world. She is what we all strive to be.”